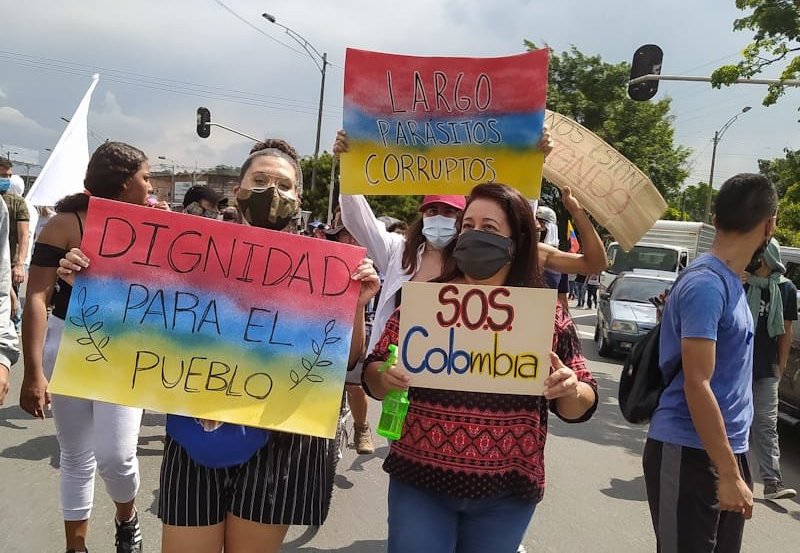 Colombian President Iván Duque flew to Cali in the middle of the night after street clashes in the southwestern city left several indigenous protesters injured May 9. Amid a national strike sparked by Duque’s proposed burdensome tax reform, some 5,000 indigenous activists from the nearby administrative department of Cauca had been holding a “Minga,” or protest gathering, on the outskirts of Cali, when unknown gunmen in civilian dress arrived in a pickup truck and opened fire. The Regional Indigenous Council of Cauca (CRIC) reported that at least 10 activists were wounded, and that the gunmen were intermingled and cooperating with uniformed police. It remains unclear if they were plainclothes agents or vigilantes.

There was a similar incident May 6, four days after the Minga gathered in Cali, in which gunmen arrived in the back of a truck and fired on the protesters. After that incident, the Cali Metropolitan Police, who are under the command of Colombia’s National Police, acknowledged that the truck belonged to them, but asserted that the protesters had initiated the violence. The CRIC denied that any members of the Minga had engaged in violence. (El Espectador, May 11; Anadolu Agency, Bloomberg, May 10, El Espectador, El Espectador, InfoBae, May 6)

Duque spoke with Cali municipal leaders in the late-night meeting, even as violence continued in the streets. Troops from the feared National Police anti-riot squad ESMAD flooded the streets of Siloé, the outlying district where the shootings occurred. (El Tiempo, May 10)

No accord with National Strike Committee
Duque met the next day at the Casa de Nariño, the presidential palace in Bogotá, with leaders of the National Strike Committee, but no accord was reached. Strike leaders are demanding not only cancellation of the tax reform, but an emergency vaccination campaign to address the COVID-19 crisis, cancellation of a planned neoliberal reform of the health sector, and a hike in the minimum wage to meet the needs of basic income. (El Tiempo, May 11; El Tiempo, May 10)

At least 24 protesters have been killed since the national strike began April 28, mostly in Cali. Members of the Congressional Peace Commission, which is overseeing Colombia’s  process of demilitarization, also flew to the city last week, to help “guarantee the right to protest, that the Public Force respects human rights, and that the violence is halted.” (El Tiempo, El Tiempo, May 6)

Nationwide mobilization —despite state terror
But the capital itself also saw street clashes last week that left some 30 protesters and half as many police troops injured. Bogotá Mayor Claudia López said some 100 buses were torched by protesters, and several police stations attacked. She decried the “tragic and painful” situation in the city. (El Espectador, Contagio Radio, May 5) Misak indigenous protesters in Bogotá last week toppled a statue of the conquistador Gonzalo Jiménez de Quesada, emulating the example of indigenous protesters in Cali the week before that who tore down a statue of the conquistador Sebastián de Belalcázar. (El Tiempo, May 7)

According to local reports, an ongoing street festival, with music and dancing as well as marches, is being maintained by strike supporters in Medellín—despite police repression that has led to hundreds of detentions. (Colombia Informa, May 6)

The Search Unit (Unidad de Búsqueda), a body established by the government to investigate “disappearances” as part of the peace process, has registered over 370 reports of “forced disappearance” since the national strike began. (El Espectador, May 6)

Outlying areas of Valle del Cauca, the department of which Cali is the capital, have also seen a wave of terror. Since the strike began, authoriites in the rural municipality of Restrepo have reported six assassinations of local residents, by presumed right-wing paramilitaries. (El Espectador, May 3)

The indigenous Minga has been pressing its own demands for local autonomy and restoration of usurped territories, including that Colombia formally adopt the UN Declaration on the Rights of Peasants, approved by the General Assembly in 2018. (Blu Radio, Oct. 19)