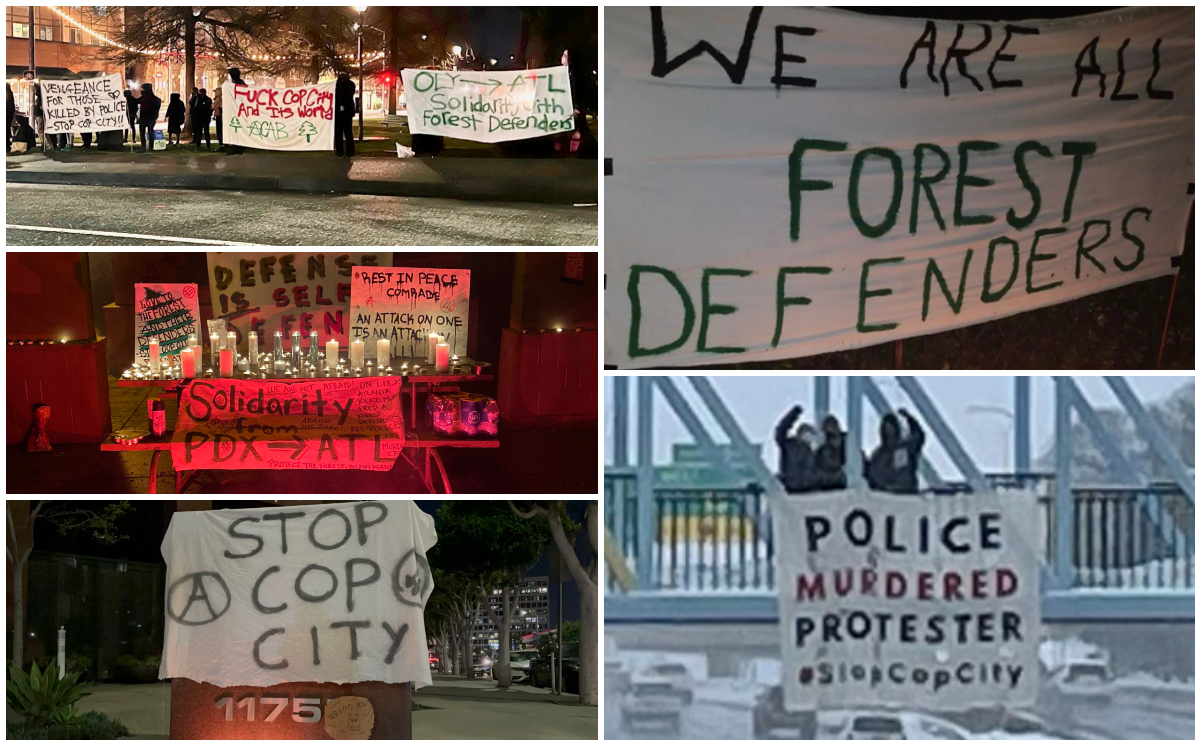 Protests and vigils have been held across the US following the police slaying of environmental activist Manuel Teran, 26, also known as Tortuguita, in Georgia’s Dekalb County. A protest over the killing turned violent in downtown Atlanta, with a police car burned, windows smashed, and several arrested. Tortuguita was shot in a police raid on an encampment in the Weelaunee Forest, a threatened woodland within the South River Forest conservation area. The Atlanta Police Foundation seeks to clear a large area of the forest in order to build a $90 million Public Safety Training Center, referred to as “Cop City” by local residents. Authorities say a Georgia state trooper was also shot and injured in the raid. (Image: It’s Going Down)

New York Mayor Eric Adams traveled to the US-Mexico border and declared that “there is no room” for migrants in his city. At a press conference with El Paso Mayor Oscar Leeser, Adams called on the US government to help cities manage unprecedented levels of immigration, and claimed that the influx of migrants could cost New York City up to $2 billion. “The federal government should pick up the entire cost,” Adams said. “[W]e need a real leadership moment from FEMA. This is a national crisis.” He also criticized the governors of Texas and Colorado for contributing to a “humanitarian crisis that was created by man,” citing busloads of migrants sent to New York and other northern cities. But New York City comptroller Brad Lander dissented from Adams’ Texas trip, stating that it “reinforces a harmful narrative that new migrants themselves are a problem.” (Photo via TripAdvisor)

President Joe Biden announced that the US is to extend a parole program previously offered only to migrants from Venezuela to those from Cuba, Nicaragua and Haiti, allowing them to apply for residency—but reiterated that his administration will continue to enforce Title 42, in compliance with a recent order from the Supreme Court. In fact, under his new policy, Title 42 expulsions are to increase, with Mexico agreeing to accept expelled Cubans, Nicaraguans and Haitians. A provision of the Public Health Service Act allowing for summary expulsion of migrants at the southern border, Title 42 is in effect pursuant to a Centers for Disease Control order of March 2020 as a COVID-19 emergency measure. The policy shifts as litigation over Title 42 has been batted back and forth in the US courts has led to confusion in cities on both sides of the border. Squalid encampments have sprung up in Matamoros, Reynosa and other Mexican border towns as migrants await entry to the US. (Photo via FWS) 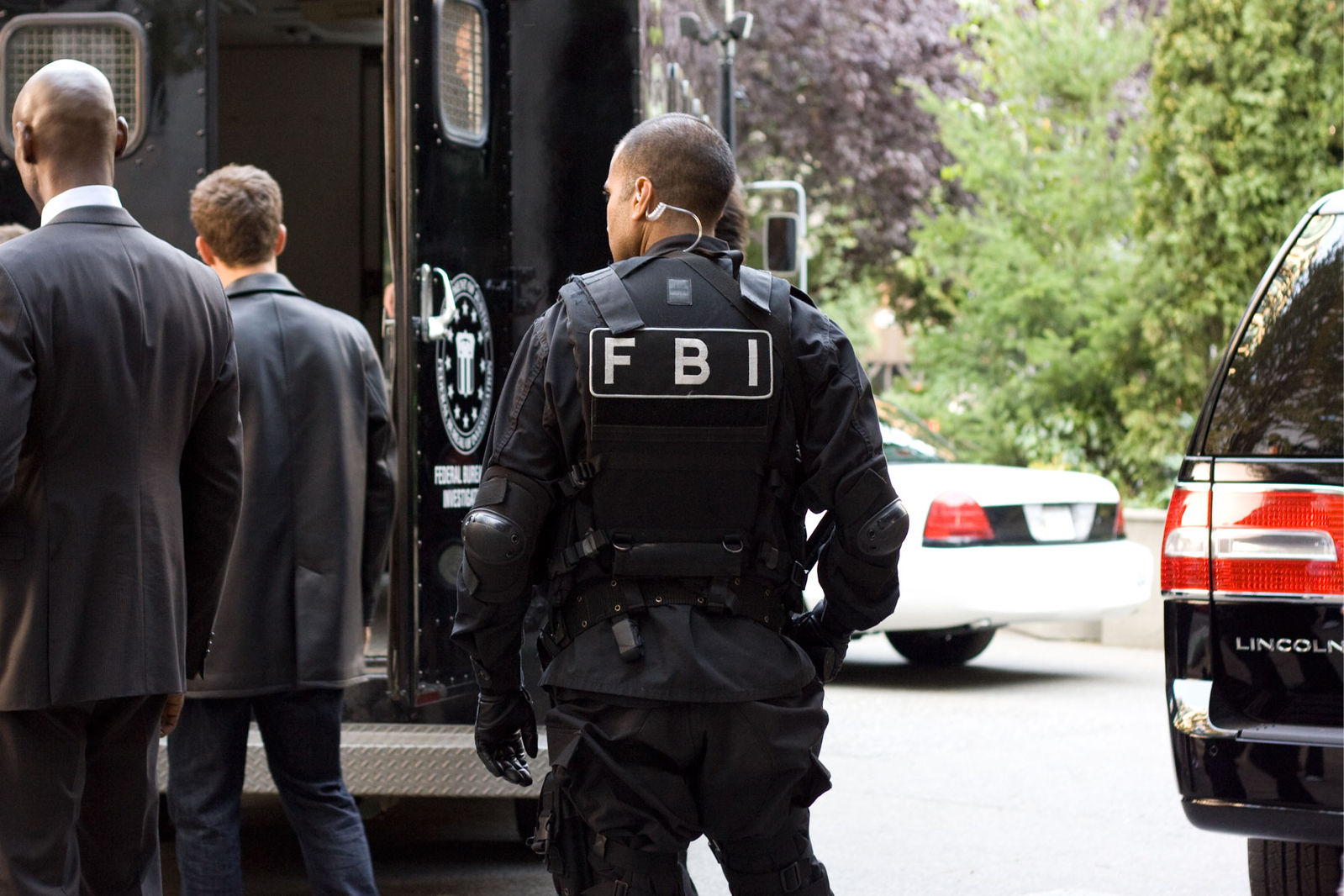 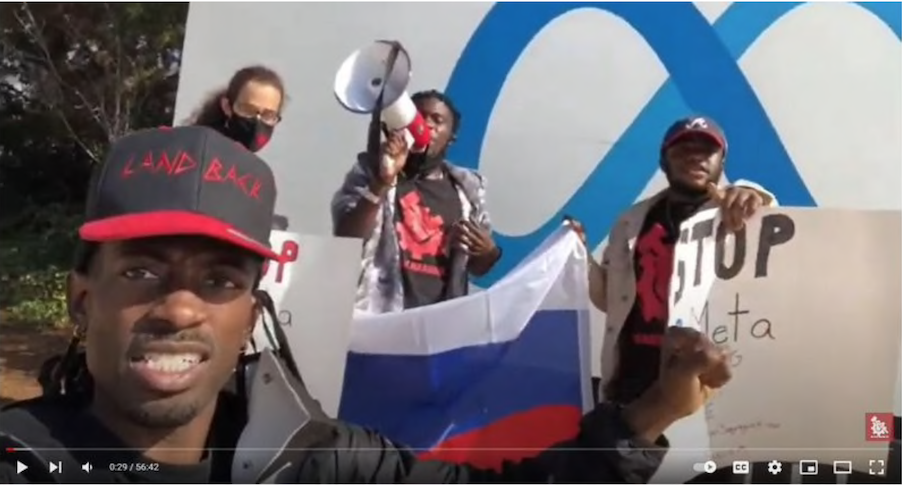 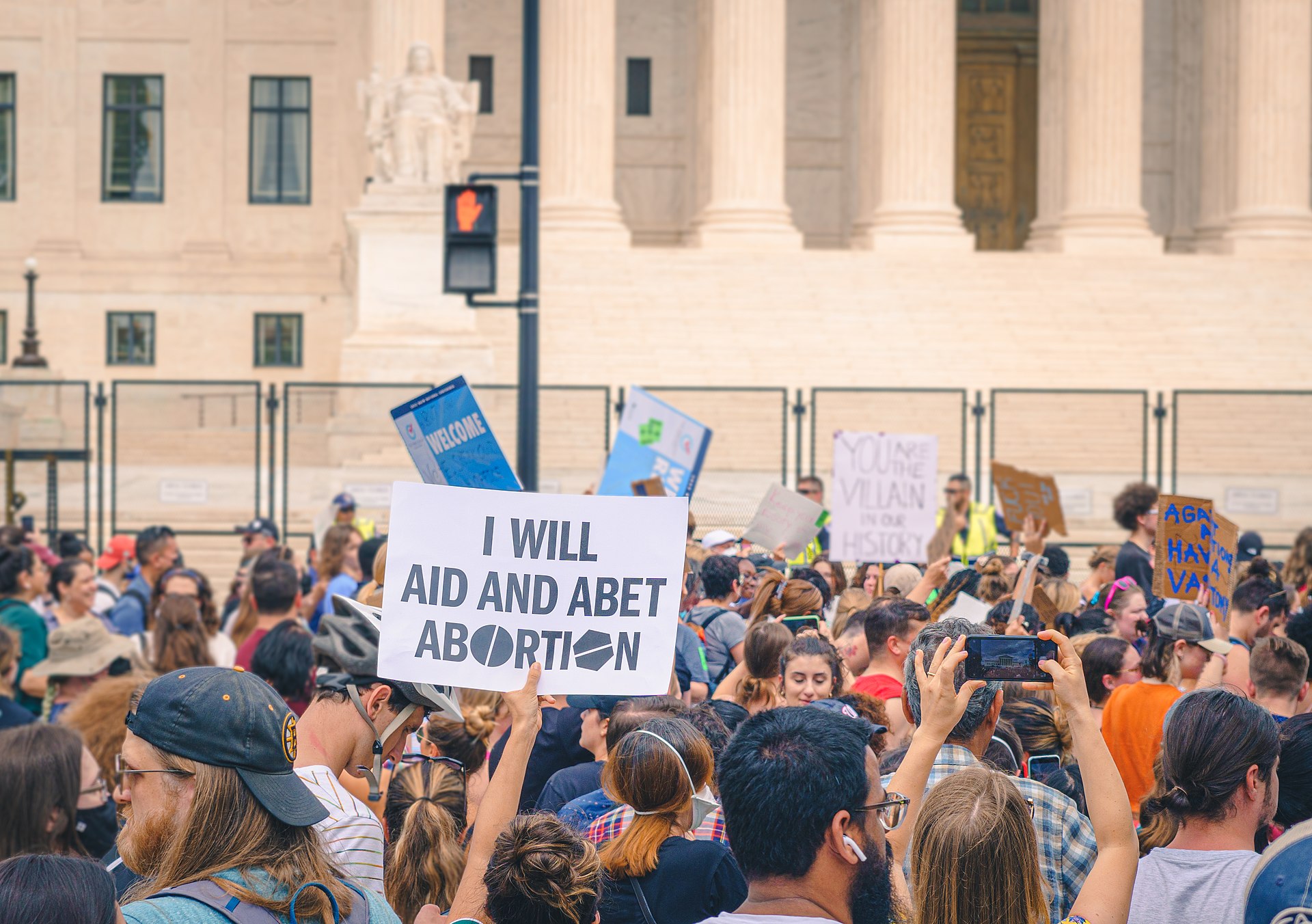 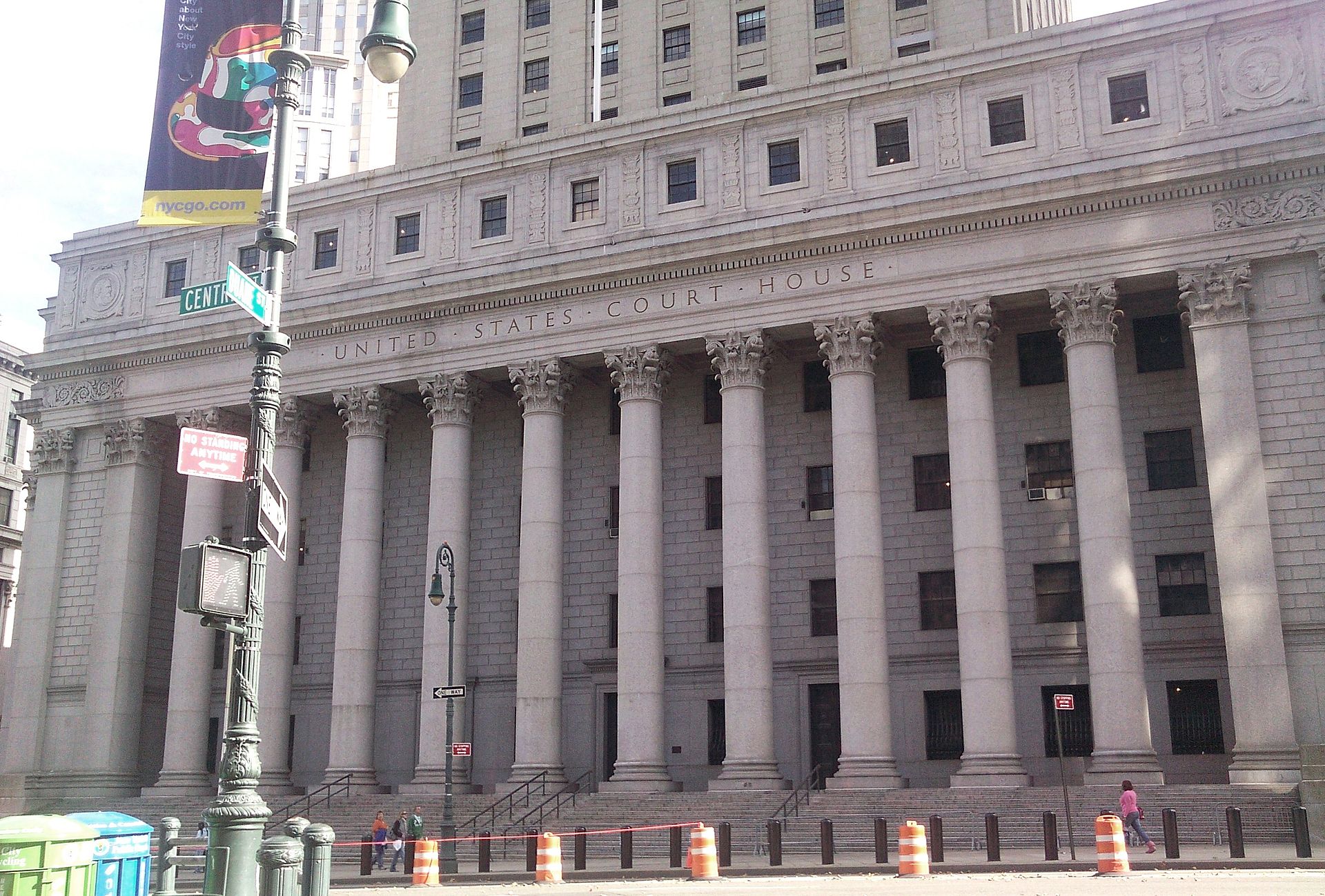 The US Court of Appeals for the Second Circuit reinstated a New York law that limits protest near courthouses. The reinstated law, New York Penal Law § 215.50 (7), prohibits people from engaging in conduct “concerning the conduct of a trial being held” within 200 feet of a courthouse. The case, Picard v. Magliano, concerned activist Michael Picard, who was arrested for distributing “jury nullification” literature outside of a New York courthouse. In 2017, Picard stood outside of the Bronx County Hall of Justice holding a sign that said “Jury Info.” Picard had flyers that read “No Victim? No Crime. Google Jury Nullification” and “‘One has a moral responsibility to disobey unjust laws’ – Martin Luther King Jr.” Picard claimed he was not trying to influence juror votes, nor was he aware of “any particular cases in which jurors were being impaneled or serving at the time.” (Photo: Wikipedia) 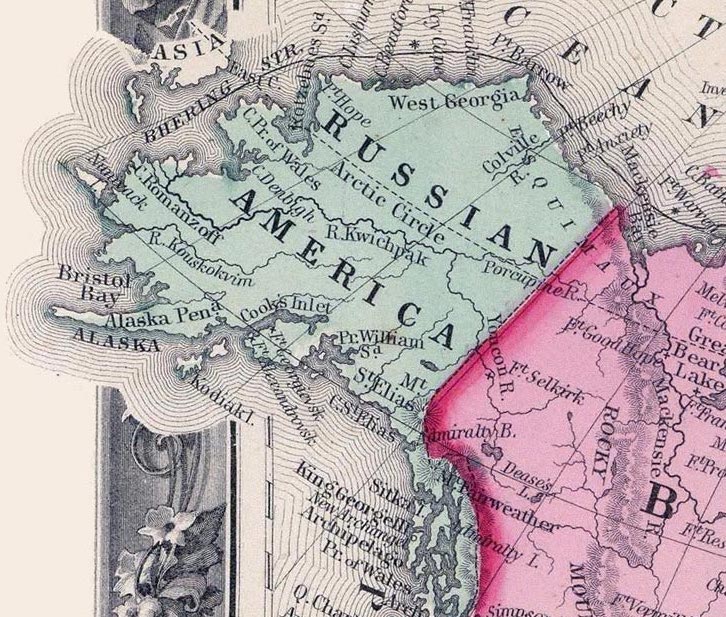