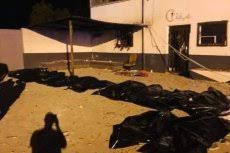 UN Secretary General Antonio Guterres is calling for an independent investigation of the “outrageous” bombing of a migrant detention center at Tajoura, outside Libya’s capital Tripoli July 2. The attack killed at least 44 migrants and refugees, including women and children, and injured more than 130. Guterres noted that the UN had given its exact coordinates to the warring parties in the ongoing Libyan conflict. This was also emphasized by the United Nations refugee agency, UNHCR, which said in a statement: “Coordinates of such centres in Tripoli are well known to combatants, who also know those detained at Tajoura are civilians.” UN High Commissioner for Human Rights, Michelle Bachelet said, with requisite caution: “This attack may, depending on the precise circumstances, amount to a war crime.”

Libya’s UN-recognized Government of National Accord (GNA) issued a statement blaming warlord  Khalifa Haftar and his self-proclaimed Libyan National Army for the air-strike, and called for the UN support mission to urgently establish a fact-finding committee to investigate. (CBC, BBC News, Libyan Express)

Haftar, whose forces have for months been attempting to seize Tripoli, is believed to be supported by France and Russia. He has now also apparently established contact with Washington.  The White House admitted on April 19 that President Trump had spoken by phone with Haftar that week and discussed “ongoing counter-terrorism efforts.” A White House statement said that in the call, Trump “recognized Field Marshal Haftar’s significant role in fighting terrorism and securing Libya’s oil resources, and the two discussed a shared vision for Libya’s transition to a stable, democratic political system.”  (Reuters, April 19)

Egypt has also been accused of backing Haftar, and the head of the GNA’s High Council of State  accused Egypt of the Tajoura bombing. “The country that is currently presiding over the African Union is the same country that bombarded the African immigrants last night in Tajura.” Khalid al-Mishri said on Twitter (Libyan Express)

International rights groups have long been protesting the ghastly conditions faced by thousands of detained migrants in Libya.