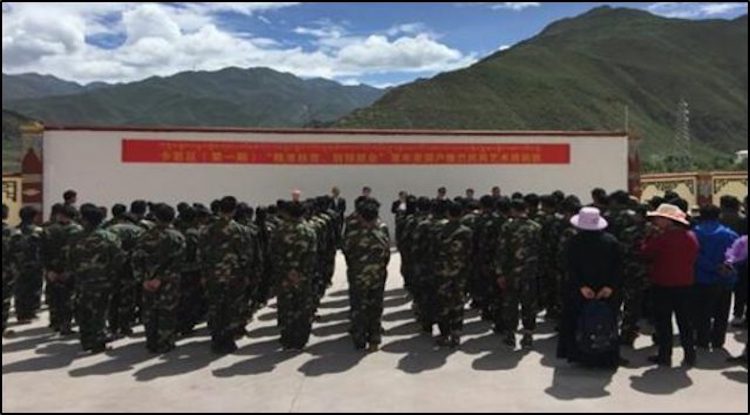 A new report by the Inter-Parliamentary Alliance on China and the Jamestown Foundation, a DC-based policy think-tank, has found evidence of a system of forced displacement and labor in Tibet, mirroring that put in place over the past two years in Xiinjiang. The report, entitled “Xinjiang’s Militarized Vocational Training System Comes to Tibet,” finds that over half a million people received instruction at “military-style” training centers as part of the program in the first seven months of 2020—around 15% of the region’s population. Of this total, almost 50,000 have been transferred to jobs away from their homes within Tibet, and several thousand have been sent to other parts of China. Many end up in low-paid labor, including textile manufacturing, construction and agriculture. Those targeted for the program are designated “rural surplus laborers,” which according to the report usually refers to traditional pastoralists and nomads. (Photo: military-style training of “rural surplus laborers” in the Chamdo region of Tibet, June 2016, via Phayul) 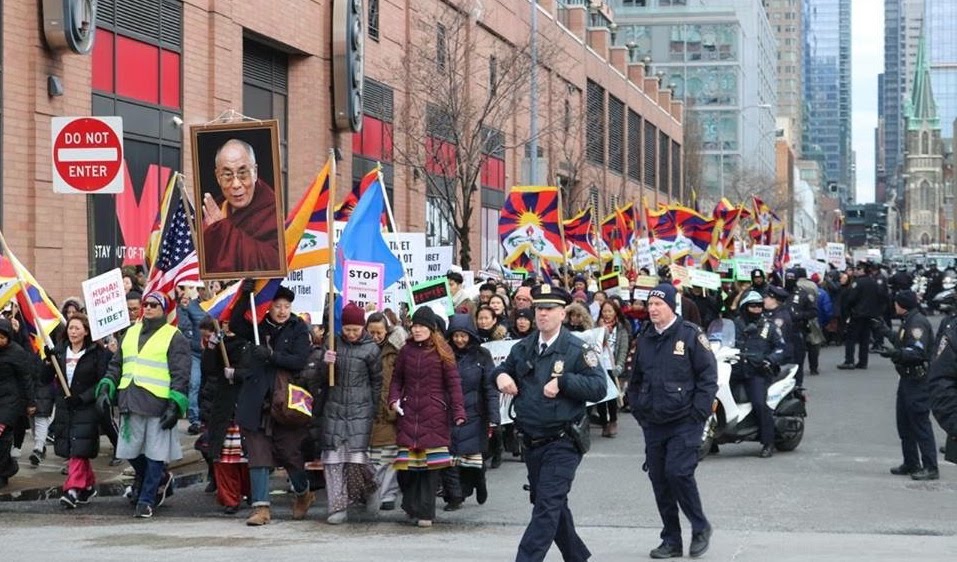 An NYPD officer and Army reservist was arrested by federal authorities on charges that he has been acting as an agent of China’s government and surveilling Tibetans living in the New York City area. Baimadajie Angwang of Nassau County worked as a community liaison officer at the 111th Precinct in Queens and held a “secret” security clearance as a member of the Army Reserves at Fort Dix, according to court documents. Prosectuors say Angwang, a native Tibetan and naturalized US citizen who served three tours in Iraq and Afghanistan, sent information to officials at the Chinese consulate in Manhattan about the activities of local ethnic Tibetans. Angwang was allegedly working with officials at the consulate since 2014, including one who was part of the Chinese Communist Party’s United Front Work Department, responsible for “neutralizing sources of potential opposition” to the government of China, court documents state. (Photo: Central Tibetan Administration) 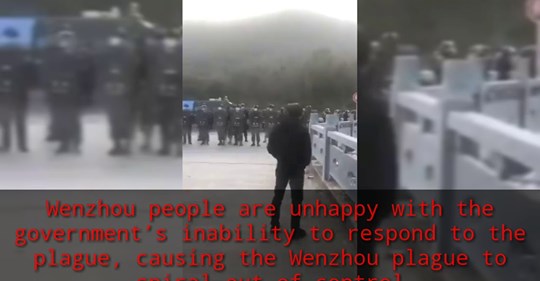 “Citizen journalists” and “netizens” in China who are critical of the government’s handling of the COVID-19 (coronavirus) outbreak are being “disappeared”—but online criticism is spreading faster than official censors can contain it, in by far the biggest eruption of dissent under Xi Jinping’s rule. At least one city, Wenzhou, has seen a street protest over the draconian controls the government is instating, in open defiance of the lock-down. Even voices from within China’s political establishment are saying this could be the biggest challenge to the regime’s legitimacy since 1989. (Image via YouTube) 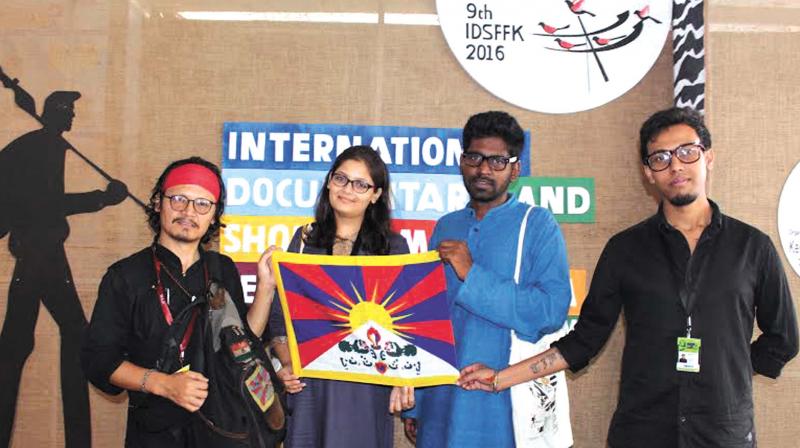 Police in south India’s Tamil Nadu state have detained nine Tibetan activists, apparently in a move to pre-empt protests ahead of the upcoming visit by Chinese President Xi Jinping for bilateral talks with Prime Minister Narendra Modi. Among those arrested was Tibetan writer and poet Tenzin Tsundue, who was detained in the town of Kottakuppam, within 100 kilometers of Mamallapuram, the city where the three-day summit is to be held. Tenzin had been arrested twice previously during visits by Chinese leaders. In 2002, Tsundue unfurled a banner reading “Free Tibet” at a hotel in Mumbai where Chinese premier Zhu Rongji was addressing a gathering. He was again arrested in Bangalore in 2005 for protesting against then Chinese premier Wen Jiabao. Police in Tamil Nadu said he was planning a similar action during Xi’s visit. (Photo of Tenzin Tsundue, far left, via Deccan Chronicle)

In Episode 39 of the CounterVortex podcast, Bill Weinberg explores the politics of the Hong Kong protests—and especially how they have been playing out in New York’s Chinatown. It is natural that the Hong Kong protesters have made common cause with the Tibetans, Uighurs and Mongols also struggling for their rights and dignity against China’s ruling party-state. But some supporters of these movements have come to embrace a separatist position, actually seeking independent states in Hong Kong, Tibet, East Turkistan and South Mongolia. Will self-determination for these regions and peoples be possible without active solidarity with the struggles for democracy and political empowerment by the Han Chinese majority of the People’s Republic? Listen on SoundCloud, and support our podcast via Patreon. (Map: East Turkistan National Awakening Movement) 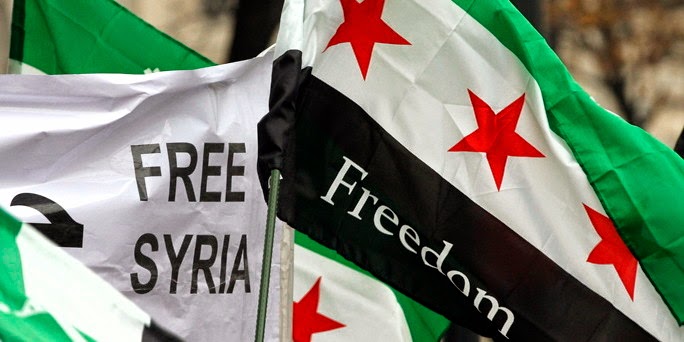 In Episode 32 of the CounterVortex podcast, Bill Weinberg reads from George Orwell’s 1945 essay “Notes on Naitonalsim,” and explains why despite his anarchist politics he is willing to march under the Mexican flag but not “Old Glory,” under the Palestinian flag but not the Israeli, under the Tibetan flag but not that of the People’s Republic of China—and under the Free Syrian flag but not that of the Assad dictatorship. The Free Syrian flag flown by the rebels and opposition is the original flag of an independent Syria, and now represents the struggle to free the country from a one-family dynastic dictatorship massively propped up by foreign powers. Weinberg especially calls out the depraved Max Blumenthal for purveying a version of events in Syria starkly at odds with reality. Weinberg invites listeners to join the Syria Solidarity NYC contingent at New Yorkl’s May Day march, gathering 5 PM at the Sixth Ave. entrance to Central Park. Listen on SoundCloud, and support our podcast via Patreon. (Photo: SHAML)

In Episode 28 of the CounterVortex podcast, Bill Weinberg notes with trepidation Google’s plans to develop a censored search engine for China, and thereby be allowed back through the Great Firewall to access the world's largest market. But the next and more sinister step is imposing China's draconian standards for control of information on all Internet users, worldwide. Harbingers of this are already seen in Facebook's censorship of the Tibetan struggle, and of the Kurdish struggle in Turkey, as well as initiatives to suppress footage of Israeli war crimes. While protesting such moves is imperative, the potential for such abuses in inherent to the technology—and this, ultimately, is a deeper and more complex problem that also demands a thoroughgoing critique. Listen on SoundCloud, and support our podcast via Patreon. (Photo: Students for a Free Tibet)

Rising temperatures in the Himalayas will melt at least one-third of the region's glaciers by the end of the century even if the world's most ambitious climate change targets are met, according to a new report. If those goals are not reached, the Himalayas could lose two-thirds of their glaciers by 2100, according to the Hindu Kush Himalaya Assessment, released by the Kathmandu-bsed International Centre for Integrated Mountain Development. Under that scenario, the Himalayas could heat up by 8 degrees Fahrenheit (4.4 degrees Celsius) by century's end, bringing radical disruptions to food and water supplies, and mass population displacement. Glaciers in the Hindu Kush-Himalayan Region, which spans over 2,000 miles of Asia, provide water to nearly a quarter of the world's population. (Photo via Nepali Times)