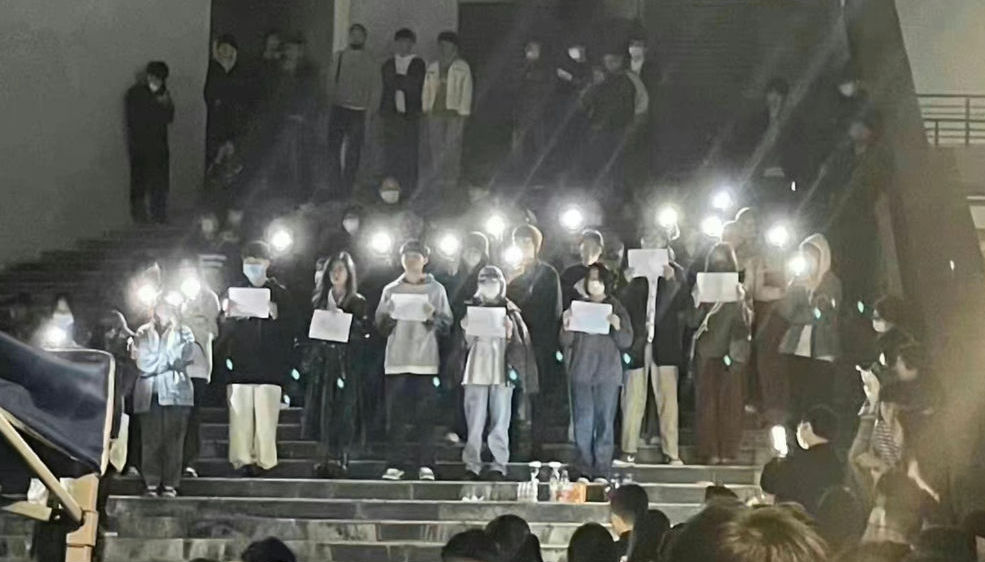 Following weeks of sporadic protests against the recurrent draconian COVID-19 lockdowns in China, spontaneous demonstrations broke out in cities across the country Nov. 27. Street demos were reported from Shanghai, Nanjing, Chengdu and Wuhan as well as Beijing. In addition to slogans against the lockdowns and for freedom of speech and assembly, such verboten chants were heard as “Xi Jinping, step down” and “Communist Party, step down.” Some called Xi a “dictator” and “traitor.” Images have been circulating on social media despite the best efforts of authorities to contain them. Many images show demonstrators holding blank sheets of paper as an ironic protest against censorship.

The spark was a Nov. 24 apartment block fire in Urumqi that killed at least 10 people who were under lockdown orders and apparently unable to flee. Protests immediately broke out in Urumqi, capital of western Xinjiang region. Local authorities responded by easing restrictions there, but the protests then spread to China’s heartland. (PBS, BBC News, BBC News, Amnesty International, Al Jazeera)

Hong Kong-based Borderless Movement left-dissident website has issued a list of “Demands from Chinese and Hong Kong Socialists” in response to the outburst. These include an end to lockdowns and forced testing, provision of options for multiple vaccines (beyond the dubiously effective CoronaVac and Sinopharm), the right to citizen and worker self-organization, and abolition of oppressive labor practices like the so-called 996 work schedule. The statement ends with a call for “marginalized groups in the mainland and abroad, including Hongkongers, Taiwanese, Uyghurs and Tibetans to continue building a long-term strategic program for democratic struggle in China.” (Lausan Collective)

Oct. 26 saw anti-lockdown protests in the Tibetan capital Lhasa, bringing together both Han Chinese and ethnic Tibetans. The protests first broke out among migrant workers who demanded to be allowed to return to their homes after three months on lockdown in Tibet. (PRI, BBC News, RFA, Phayul)

In recent weeks, disturbing reports have emerged of massive “quarantine camps” being built in cities including Guangzhou and Beijing. (India Today, Bloomberg, PBS)

The sudden protest wave, unprecedented in 30 years, comes a month after Xi Jinping consolidated his personal dictatorship at the 20th National Congress of the Chinese Communist Party.