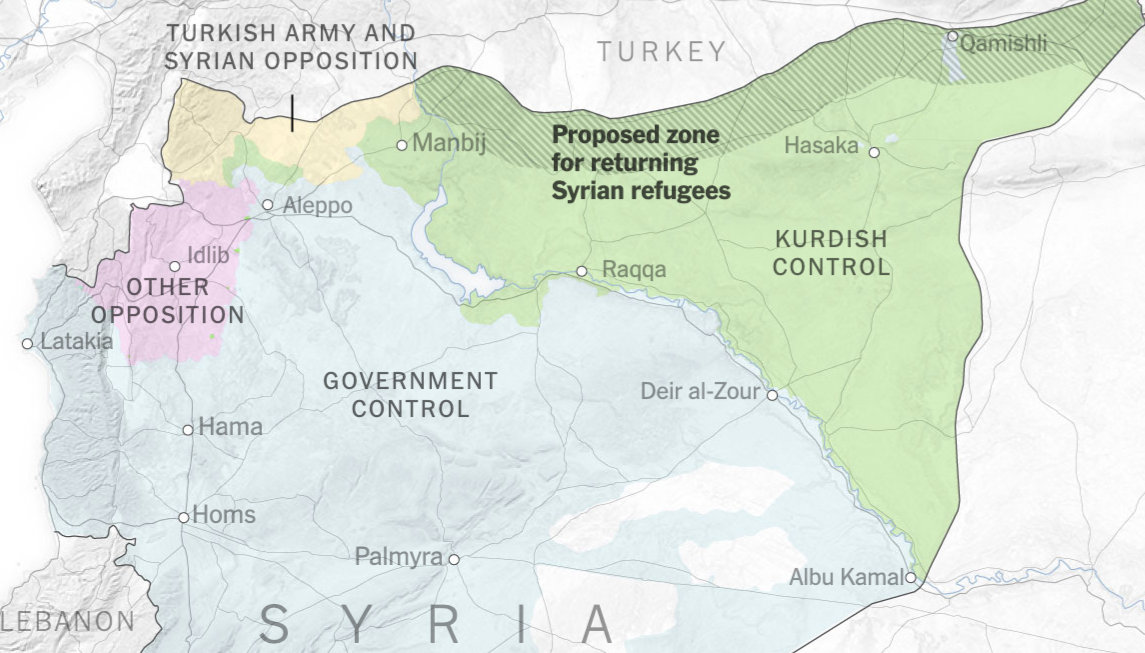 Turkey launched its assault on the Kurdish autonomous zone in northern Syria Oct. 9, with air-strikes and artillery pounding areas along the Syrian-Turkish border. Hundreds of civilians have fled the bombardment, headed south into areas still held by the Kurdish-led Syrian Democratic Forces (SDF). The Turkish offensive comes days after President Trump announced that he is withdrawing US forces from Kurdish-held territory in Syria, a move widely condemned by Washington’s allies. “The [US] statement was a surprise and we can say that it is a stab in the back for the SDF,” said militia spokesman Kino Gabriel. (MEE, BBC News)

Turkish President Recep Tayyip Erdogan said in a tweet, reported by Hurriyet Daily News: “Our Turkish Armed Forces with Syrian National Army has started the #OperationPeaceSpring against the PKK/YPG and Daesh terrorist organizations, in northern Syria. Our aim is to wipe out the terror corridor, trying to be implemented in our southern border, and bring peace and security to the region… With Operation Peace Spring, we will eliminate the terror threats towards our country. With the SAFE ZONE we will establish, we will provide the return of Syrian refugees to their countries. We will protect the territorial integrity of Syria and save the region’s people from the claws of terror.”

A few comments. First, a scorecard, for those who have not closely followed the various factions. The Syrian National Army is not actually the Syrian national army, that of the Assad regime, which is called the Syrian Arab Army. It is the alliance of Syrian rebel militias that have joined with Turkish forces and accepted Ankara’s leadership. The PKK is the Kurdistan Workers Party, the Kurdish rebel group in Turkish territory, which Erdogan considers the Syrian Kurdish movement to be a mere extension of. The YPG is the People’s Protection Units, the main Kurdish militia and core of the SDF. Daesh is the popular Arabic pejorative for ISIS.

So again we have Turkey’s ultra-cynical propaganda trick of conflating the secular-democratic Kurdish forces that defeated ISIS with ISIS.

But note the truly special perversity of cloaking this aggression in the guise of a “safe zone” for refugees, a humanitarian operation. In reality, Erdogan is exploiting the refugees as demographic cannon fodder, using them to populate areas Kurds are now to be displaced from, creating a new class of refugees, pitting Arabs against Kurds, and establishing the conditions for potentially generations of Arab-Kurdish ethnic war in northern Syria.

Adding to the Orwellian nature of all this is the moniker “Operation Peace Spring.” Note that the first Turkish aggression against the Syrian Kurds, the taking of Afrin canton in January 2018, was similarly dubbed Operation Olive Branch.

Genocide Watch warns that “Kurds, Christians, and Yezidis in Northeast Syria are at grave risk of genocide” in the wake of the Turkish intervention.

Turkey has declared its intention to “resettle” millions of Syrian Arab refugees now in Turkey into Kurdish northeastern Syria. This forced displacement and refoulement of refugees is a crime against humanity and a violation of UN refugee conventions. It would “resettle” Syrian Arab refugees in a region that was not their former home. Turkey’s goal is to forcibly displace a million Kurds on Turkey’s southern border and replace them with Syrian Arabs, just as the Turks have done in Afrin. Turkey intends this demographic change to destroy Kurdish autonomy in “Rojava” a self-governing Kurdish region of northeastern Syria.

Erdoğan has vowed to continue the Turkish invasion further east to Manbij and Kobane in Syria as well as to the Sinjar and Nineveh regions of Iraq, ostensibly to destroy the PKK, but actually to drive Kurds out of all Syrian border areas with Turkey. Turkey’s aggression into neighboring states threatens the long-term security of all Kurdish, Christian, and Yezidi populations in the region. Turkey’s intention is genocide.

The Assad regime has wasted no time in exploiting the situation, of course. Assad’s deputy foreign minister Faisal Mekdad called on the Kurds to join the government side rather than “plunge into the abyss.” (Haaretz)

But of course a Kurdish separate peace with the mass-murdering regime would also mean abrogating their hard-won autonomy—and yet further advance the trajectory toward ethnic war.

The betrayal of the Syrian Kurds is one that was long foretold. It is now upon us, and urgently demands worldwide protest. The stakes for the future peace of the entire region could not be higher.