The pro-government Pact of Unity and Bolivian Workers’ Central (COB), the Andean country’s largest trade union federation, held a “March for Democracy” in La Paz to oppose what they called “destabilization” attempts and demonstrate their support for President Luis Arce. Thousands marched from the outlying working-class city of El Alto to Plaza Mayor de San Francisco in La Paz, where a mass rally was held. But days earlier, cocaleros of the Departmental Association of Coca Producers (ADEPCOCA) marched in La Paz, accusing the government of attempting to undermine the organization’s legal monopoly on sale of coca leaf by establishing a “parallel market” in the city, run by loyalists of the ruling party. ADEPCOCA announced formation of a “Self-defense Committee” to forcibly shut down the “parallel market” in the city’s Villa El Carmen district if the government does not act. (Photo: ADEPCOCA via La Razón) 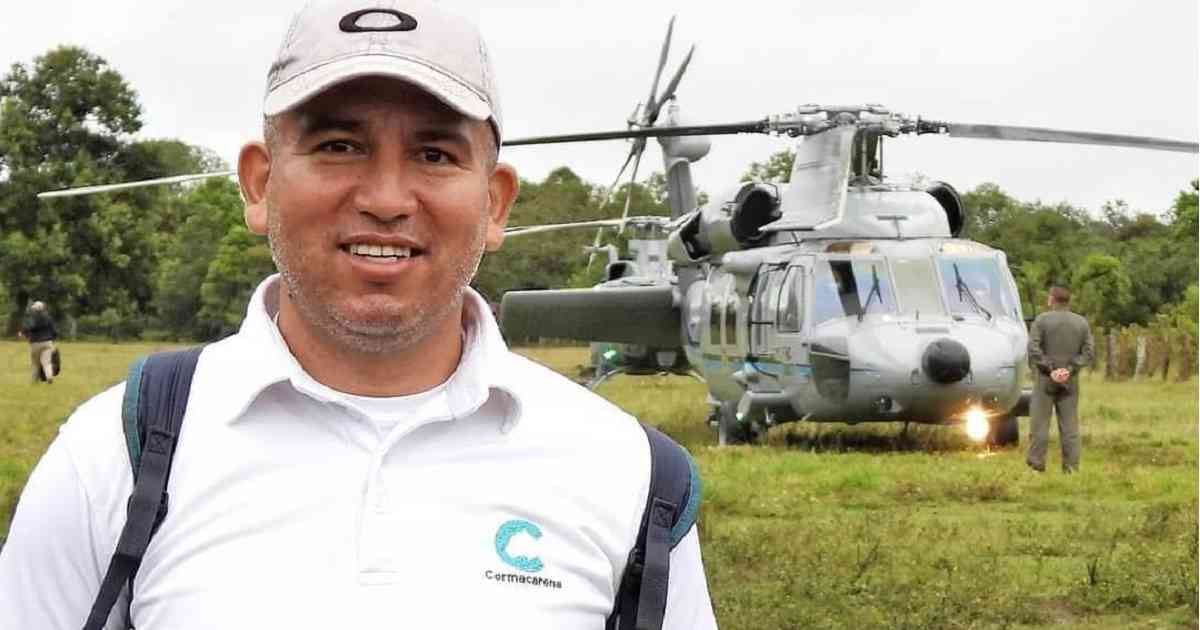 Javier Francisco Parra Cubillos, environmental director of Cormacarena, the government body responsible for managing La Macarena national park on the eastern slopes of the Colombian Andes, died in a local hospital after receiving multiple gunshot wounds from a pair of presumed sicarios (hired assassins) who fired on him from a motorbike. The remote area of fragile cloud-forest has long been the scene of armed conflict and coca cultivation, and has recently seen a surge in illegal logging. Parra Cubillos won national attention in 2017, when he accompanied Colombia’s then-president Juan Manuel Santos on a visit to a scenic site within the park, Caño Cristales (Cyrstal Canyon), to raise awareness about the need to preserve the zone. The government has offered a reward of 40 million pesos (about $11,500) for information leading the apprehension of the assailants. (Photo: Cormacarena via Semana) 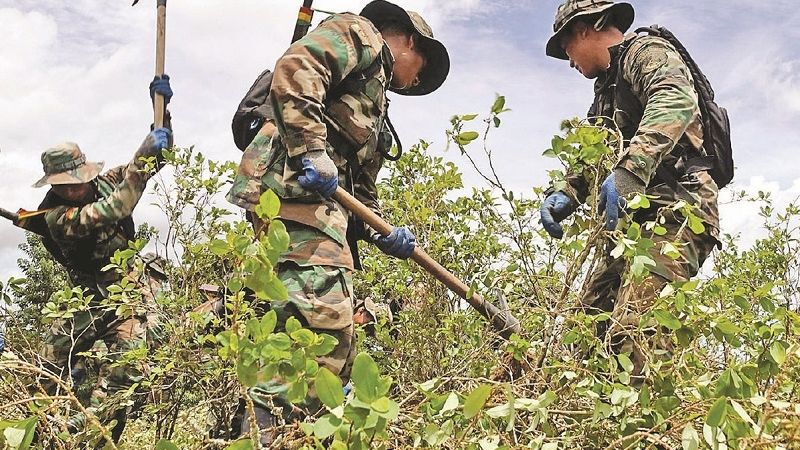 Bolivia’s National Council to Combat Illicit Drug Trafficking (CONALTID) has issued a new strategy paper calling for changes to the country’s General Coca Law that would allow eradication operations throughout the Chapare region in the eastern lowlands. The change would overturn a reform of the law made under Evo Morales that permitted coca cultivation for the legal domestic market throughout most of Chapare. The CONALTID strategy asserts that 91% of Chapare coca production is being diverted to the illicit market. In announcing the policy change, Defense Minister Fernando López issued a stern warning to the inhabitants of the Chapare: “We are not playing, we are ready for anything.” Chapare, a heartland of support for the ousted Morales, has been a de facto autonomous zone outside the control of La Paz since last year’s coup d’etat. (Photo: Página Siete) 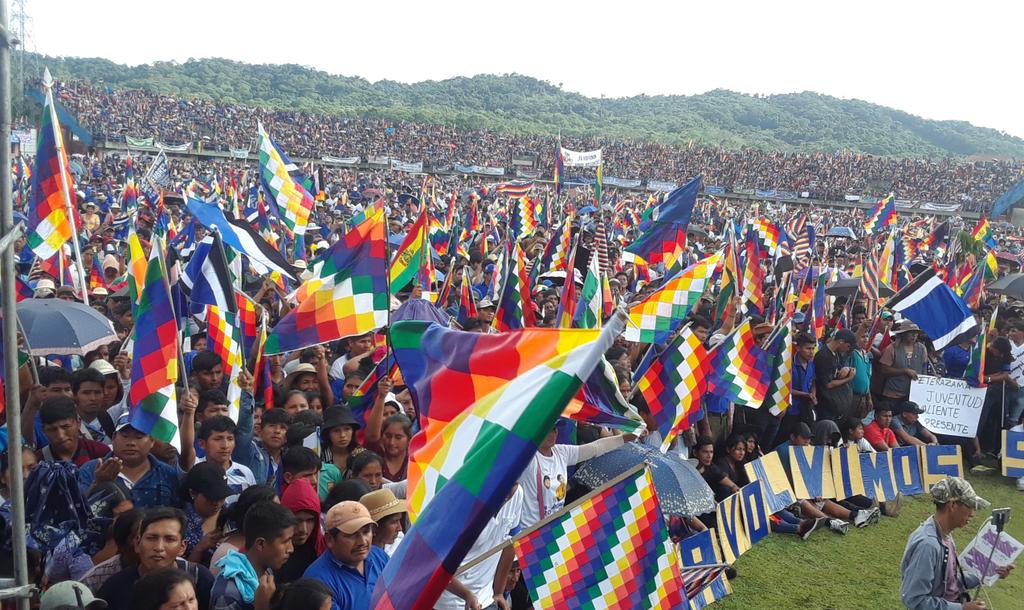 The new Bolivian regime’s Government Minister Arturo Murillo is threatening a military invasion of the eastern lowland region of Chapare, heartland of support for ousted president Evo Morales, which has become a de facto autonmous zone outside the control of La Paz. Murillo implied to reporters that planned new elections will not proceed until control over Chapare has been re-established. In the aftermath of the November coup, the Six Federations of the Tropic of Cochabamba, the cocalero alliance once led by Morales, mobilized to resist the new regime. The region was cut off by cocalero roadblocks, and several National Police statons burned. The roadblocks have since been relaxed, but large areas of the province are without any police presence and effectively independent. (Photo: Ollie Vargas via Twitter)

Bolivia’s Plurinational Legislative Assembly passed an “Exceptional & Transitional Regime Law” that annus last month’s contested elections and calls for new elections to be held within 120 days—without Evo Morales as a candidate. The pact follows talks mediated by the Catholic Church and the European Union between the new government of interim president Jeanine Añez and leaders of the ousted Morales’ party, the Movement Toward Socialism (MAS), which continues to hold a majority in both houses of the Assembly. As a part of the talks, Morales supporters in the countryside have agreed to dismantle their roadblocks. Rafael Quispe, a traditional Ayamara leader, was also appointed to head Bolivia’s indigenous development agency. (Photo of Rafael Quispe being sworn in via El Pais, Tarija) 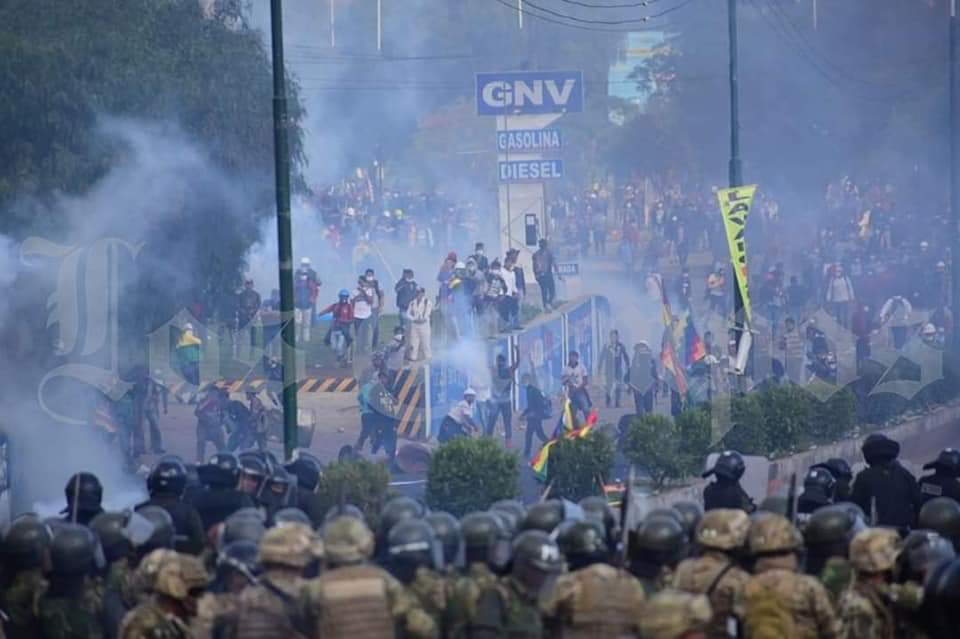 Several are reported dead after National Police and army troops opened fire on indigenous demonstrators marching on the Bolivian city of Cochabamba. A march demanding the reinstatement of ousted president Evo Morales started that morning from the town of Sacaba, gateway to the Chapare region where Morales began his career as a campesino leader in the 1990s and still the heartland of his support base. When security forces attempted to block their way over a bridge, a clash ensued. The Defensoría del Pueblo, Bolivia’s official human rights office, confirmed the death of five, with 29 more injured, but local media put the death toll at nine. Some 200 were also detained. The National Police claimed on Twitter that the protesters attacked troops with “improvised firearms.” No casualties among the security forces were reported. (Image: Alba TV via Twitter) 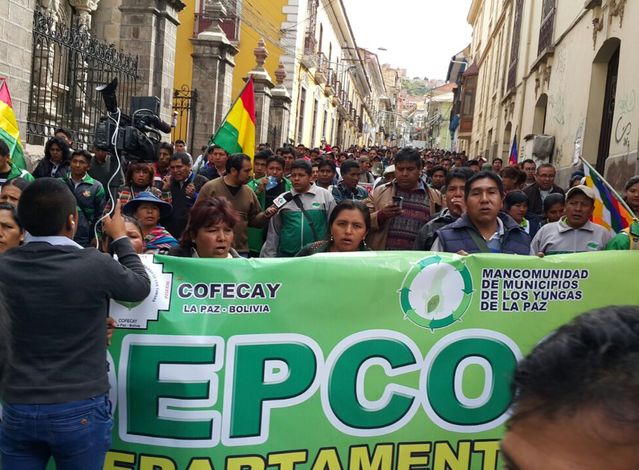 Violent tensions are flaring in Bolivia’s capital between rival factions of one of the country’s coca-grower unions, which oversee sales to the legal market. Clashes broke out in early August between two factions of the Departmental Association of Coca Producers of La Paz (ADEPCOCA)—one loyal to President Evo Morales and his ruling Movement Toward Socialism (MAS), the other to imprisoned union leader Franklin Gutiérrez. The former group staged “parallel” elections for new union leaders in late July, but the latter refuses to recognize the poll, and demands the release of Gutiérrez and other imprisoned unionists. The first clashes came as MAS supporters besieged the ADEPCOCA headquarters in La Paz, demanding that the Gutiérrez supporters surrender the offices.  (Photo: La Razón)

Colombia has taken significant steps back in a hardline pro-Washington direction since the election of the right-wing Iván Duque as the country's new president last month. Shortly after Duque's victory, the government announced that it will resume aerial spraying of glyphosate on coca crops—this time using drones rather than planes, to supposedly target the planted areas with greater exactitude. The move comes in response to a new report from the White House finding that Colombian coca cultivation has reached a new record. Incumbent President Juan Manuel Santos also announced in the lead-up to the election that Colombia will formally join the North Atlantic Treaty Organization as a "global partner"—making it the only Latin American nation with NATO affiliation. (Photo: Contago Radio)