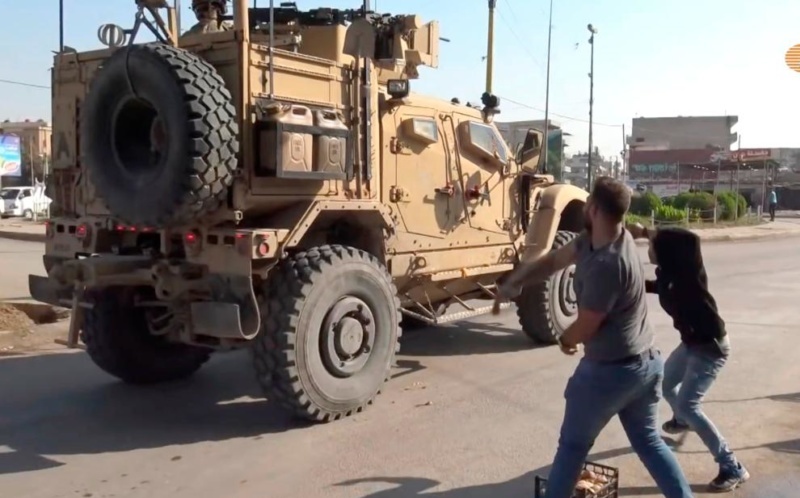 US troops hastened their withdrawal from Syria on Oct. 21, amid the anger of local Kurds and confusion over the future status of American forces in the area. More than 100 vehicles crossed into Iraq that day. The departure of the 1,000 soldiers—including 500 that were embdedded in the Kurdish-led Syrian Democratic Forces (SDF)—was marked by the US destroying weapons, equipment and facilities to keep them from falling into the hands of Russian, Assadist or Iranian forces. Video showed Kurdish residents, furious at a perceived betrayal by the Americans, berating and attempting to block a convoy of withdrawing US forces as youth pelted the trucks and armored vehicles with stones and rotten fruit.

On Oct. 6 Donald Trump made the impulsive decision, during a phone call with Turkish President Recep Tayyip Erdogan, to withdraw US forces. Three days later, Turkey and allied Syrian rebel militias launched an offensive to occupy a so-called “safe zone” 480 kilometers (270 miles) long and at least 30 kilometers (19 mile) deep along the Turkish-Syrian border, including the Kurdish autonomous cantons of Kobani and Cezire.

Ilhan Ahmed, co-president of the Syrian Democratic Council, civilian wing of the SDF, spoke out in Washington, appealing to US legislators to call upon Trump to reverse the withdrawal order. Speaking of the Turkish forces, he said: “They want to attack us. They want to kill hundreds of thousands of us.”

Some troops may stay to secure the oil
Trump showed no sign of shifting after his Oct. 20 tweet in which he incorrectly named Defense Secretary Mark Esper (as “Esperanto”) and falsely said US troops were coming home.

Meanwhile, there was confusion amid signs of a Pentagon pushback to keep about 200 troops in northeast Syria.

Esper had said that US personnel would redeploy to western Iraq, but he told reporters Oct. 21 that a force would remain in Syria to protect SDF-held oil-fields: “The purpose is to deny access, specifically revenue to ISIS and any other groups that may want to seek that revenue to enable their own malign activities.”

And the Defense Secretary, on a visit to Afghanistan, furhter muddled his statement by saying that retention of troops in Syria was only one option and no decision had been made “with regard to numbers or anything like that.” He said the Pentagon’s task is to look at “different options.”

At a Cabinet meeting on Oct. 21, Trump declared, “I’m the one that did the capturing” of ISIS fighters in northern Syria, and said, “We never agreed to protect the Kurds for the rest of their lives.” He then added a rather alarming statement about the oil-fields: “We want to keep the oil, and we’ll work something out with the Kurds so that they have some money, have some cashflow. Maybe we’ll have one of our big oil companies to go in and do it properly.”

Kurds withdraw from Ras al-Ain
In December, Trump—again following a call with Erdoğan—first ordered the withdrawal of the US personnel from Syria. Over the following weeks, the Pentagon and other US agencies chipped away at the decision, resulting in a new directive to keep 1,000 troops in position—half alongside the SDF and half at the American base at al-Tanf in eastern Syria near the Iraq border.

Last week, Turkey obtained US agreement to an ultimatum for the Kurdish militia YPG (core of the SDF) to leave the Ankara-declared “safe zone” along the border, extending east across the Euphrates River to Iraq. A five-day pause in military operations was declared.

The SDF is now reported to have left the border town of Ras al-Ain, but Erdogan says that the offensive will resume if there is no full departure from the “safe zone.”