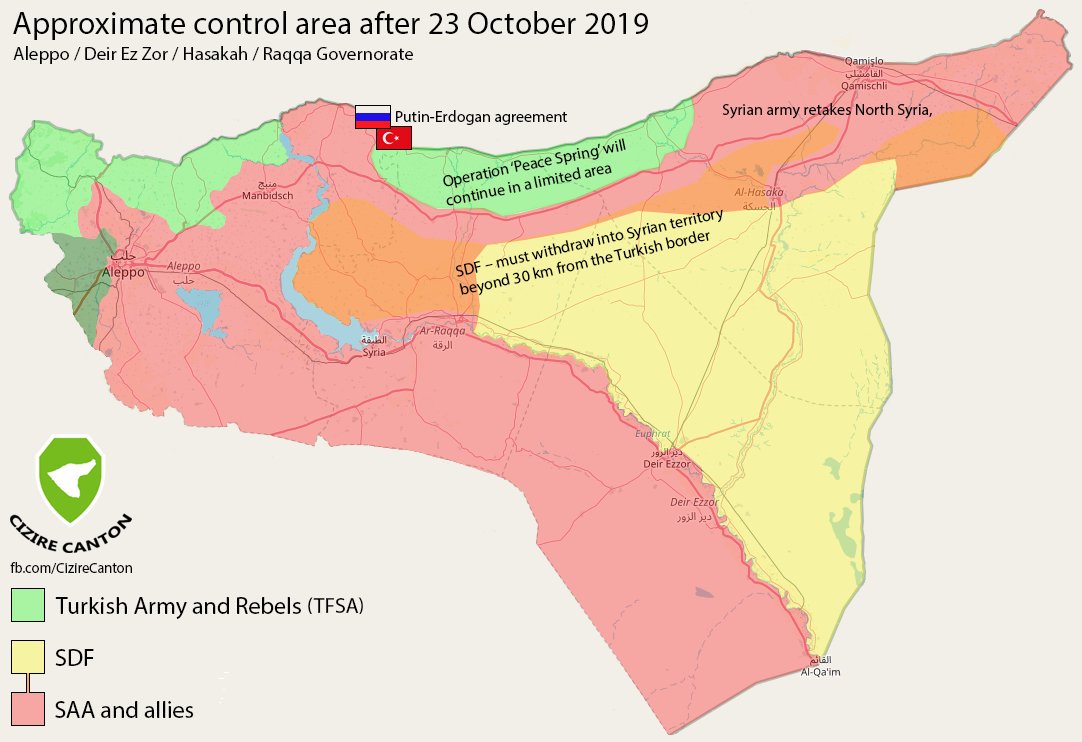 Turkey and Russia announced a deal for joint control of northeast Syria Oct. 22, as Kurdish forces retreated from the so-called “safe zone” along the border. The 10-point agreement defines the dimensions of  the “safe zone,” 480 kilometers (270 miles) long and 30 kilometers (19 miles) deep, enclosing the (former) Kurdish autonomous cantons of Kobani and Cezire. It supports Ankara’s demand for the withdrawal of the Kurdish YPG militia. In Washington, Trump wasted no time in announcing that his administration will lift the sanctions it had imposed on Turkey in response to the aggression in Syria’s north.  (EA Worldview, The Hill)

Details of this blatant carve-up are provided by Michael Karadjis on his Syrian Revolution Commentary and Analysis blog:

Turkey gets to keep its troops in the largely Arab-populated border strip between the mainly Arab city of Tal Abyad, east to the smaller, mixed Arab-Kurdish town of Ras al-Ayn (Serekanye), to a depth of 30 kilometres.

Assad regime and Russian troops will control the rest of the northeast border, both to the west (Kobane, Manbij) and east (Qamishli, Hasake) of this Turkish-occupied section, clearing the SDF away from the border to a depth of 30 kilometres, already consecrated under the deal the SDF earlier made with the regime; thus the regime will control all the main Kurdish population centres, as well as the non-Kurdish Raqqa region further south.

Once the SDF is expelled, Turkish and Russian troops (representing the regime) will patrol a 10-kilometre border zone along the northeast border, outside of the Turkish-controlled zone.

Both sides reaffirm the importance of the Adana Agreement, ie, the 1998 agreement between Turkey and Syria allowing Turkey to temporarily enter Syria when in pursuit of “terrorists.” Turkey thereby essentially recognises the Assad regime.

Turkish and allied forces have taken Tal Abyad with little resistance, and some of the Turkish-backed fighters now occupying the town are alleged to be Arabs who were uprooted from the area when the YPG seized it from ISIS in 2015. There was much more resistance in Ras al-Ayn, but the YPG has now evacuated it as well.

It’s telling that Turkey is being given Arab-majority areas while Assadist-Russian forces are occupying Kurdish-majority areas. This seems to be a bid to buy peace with the occupied populations by apportioning each area to the force perceived to be the protector of the local group. But the glaring exception is Arab-majority Raqqa, where the populace will be loathe to be back under Assadist rule, with much potential for resistance and repression.

Ironically, the Kurdish YPG and its allied militias in the Syrian Democratic Forces (SDF) are being forced under this deal out of the Kurdish heartland in the north, and deeper into Arab-majority areas of Syria—which clearly holds the threat of Arab-Kurdish ethnic conflict.

Trump immediately tweeted that the Russia-Turkey agreement was “good news.” And it isgood news—for the Great Powers, now dividing Syria on mutually agreeable terms. It is very bad news for the people on the ground who are apparently expected to live indefinitely under occupation by foreign powers and their local reactionary proxies (Assad and Turkey’s collaborationist militias). There is also no serious provision in this carve-up for those displaced from northeast Syria by the Turkish aggression over the past two weeks. The UN Refugee Agency reports that they now number nearly 180,000, mostly in rudimentary camps in the desert, with inadequate water and shelter.

Point 8 of the agreement calls for “Joint efforts…to facilitate the return of refugees in a safe and voluntary manner.” But this may be intentionally misleading language, as, with the exception of the some 1,000 who have crossed into Iraqi territory, those who have fled the Turkish advance are technically “internally displaced persons” under international law—not refugees. It is also uncertain if they will view Russian-Assadist occupation in their usurped autonomous cantons as significantly more “safe” than Turkish occupation.