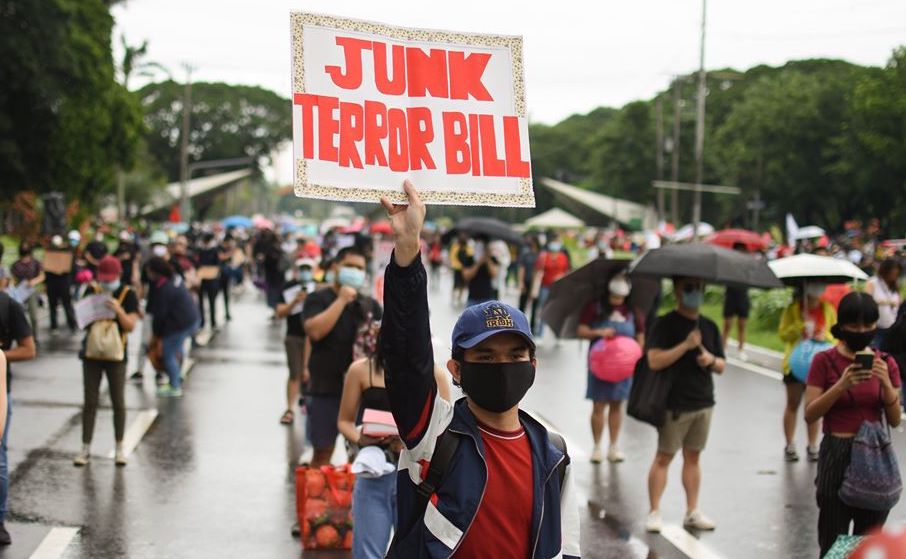 Hundreds of protesters marched in Manila June 12 against “anti-terrorism” legislation that critics fear will give Philippine President Rodrigo Duterte sweeping powers to crush dissent. This was the latest in a series of demonstrations held under the campaign #JunkTerrorBilllNow. The bill, already approved by Congress and expected to be signed by Duterte, would create a council of presidential appointees empowered to order warrantless arrests of those deemed to be “terrorists.” It also allows for weeks of detention without charge. (AFP, Anadolu) The Philippine Department of Justice is to issue a formal review of the bill, and opponents are demanding that it recommend a veto. In a letter addressed to Justice Secretary Menardo Guevarra, human rights group Karapatan secretary general Cristina Palabay said that the Anti-Terrorism Bill “will inevitably and ultimately infringe on the people’s exercise of basic rights and fundamental freedoms.” (Karapatan, Bulatlat)

On June 4, the United Nations issued a damning report finding that tens of thousands of people in the Philippines may have been killed in Duterte’s anti-drug crackdown since he took office in mid-2016. The report charges that police orders and high-level rhetoric have “risen to the level of incitement to violence” and “permission to kill.” It notes that among thousands of killings by police forces, there has been only one conviction—for the 2017 murder of Kian delos Santos, a 17-year-old Manila student. Three police officers were convicted after video footage of the slaying stirred public outrage. “Despite credible allegations of widespread and systematic extrajudicial killings in the context of the campaign against illegal drugs, there has been near impunity for such violations,” the report states. The report is to be presented to the UN Human Rights Council at its session opening on June 22.

In Manila, a presidential spokesman said the “rehashed claims” of impunity are unfounded, insisting that police “operate on strict protocols and transgressors of the law are made accountable.”

UN High Commissioner for Human Rights Michelle Bachelet has called for independent investigations into the killings in the Philippines. The International Criminal Court (ICC) has already opened a preliminary investigation. (NYT)