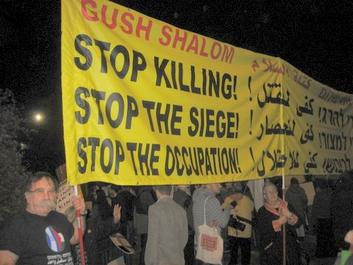 In Tel Aviv, thousands of protesters gathered Jan. 3 to demand an immediate halt to the Gaza invasion. Among participants were several residents of Sderot, a town which has been hit by Hamas rockets, who are members of the “Different Voice” organization, calling for dialogue with the Palestinians of Gaza. Some 500 Sderot residents have signed a petition calling to for Israel to halt the military campaign and renew the truce with Hamas. Sderot resident Arik Yalin said over 1,800 Israelis and Palestinians have already joined the petition. “About a month ago we realized that the situation was about to deteriorate into total chaos,” he said. “It’s important for us to voice an opinion that represents quite a few residents who live within the rocket range but who believe that we can, and should try to resolve this ongoing conflict in a peaceful manner.”