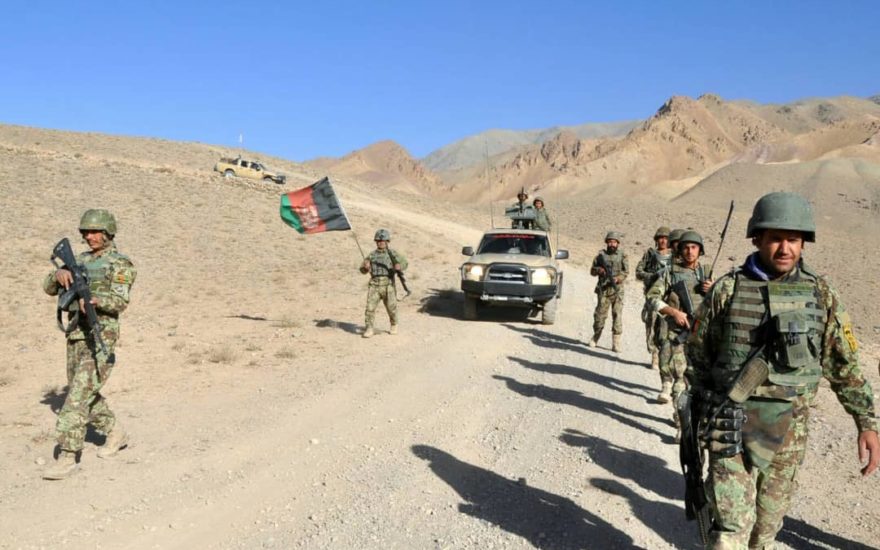 With a May 1 deadline for the withdrawal of US forces from Afghanistan approaching but a final peace deal stalled, the White House is said to be considering an extension beyond this date for removal of its 2,500 troops remaining in the country. The Washington Post writes that the Biden administration “is likely to postpone a full withdrawal—potentially with Taliban acquiescence—to buy more time to advance a power-sharing proposal they hope can break an impasse in talks between the militants and the Afghan government.”

The deadline was set by the February 2020 “Agreement for Bringing Peace to Afghanistan,” struck between the US government and the Taliban (the self-proclaimed “Islamic Emirate of Afghanistan”) in Doha, Qatar. The US committed to withdrawing all military forces within 14 months in exchange for a Taliban pledge to break ties with all terrorist groups, especially al-Qaeda. But Afghanistan’s actual government was excluded from these talks, with “intra-Afghan” negotiations between the Taliban and Kabul to follow later and decide a final peace agreement.

These intra-Afghan talks only opened in Doha in September, and remain deadlocked over fundamentals of the power-sharing deal—with the Taliban, most critically, rejecting President Ashraf Ghani’s insistence on staying in office for the remainder the five-year-term to which he was elected in September 2019. Predictably, they haven’t even got around to discussing protection of minority and women’s rights, or the role of sharia law in the new order.

Turkey and Russia are said to be organizing an Afghan peace summit to be held in Istanbul next month to break the deadlock. The seats at the table are to be expanded this time. In a move that will please the Taliban, traditional tribal leaders will be given seats—tilting the balance in favor a system based on reactionary interpretations of sharia. So too will be regional powers, including China as well as Turkey and Russia—a move obviously to be greeted with trepidation in Washington. (Khaama Press, Khaama Press, Al Jazeera)

Washington’s fears of losing control in Afghanistan 20 years afer the 2011 invasion are unambiguous. Unlike in the pseudo-withdrawals seen in the past, the Doha accord stipulates that this time Pentagon advisors and private security contractors are also to leave. US Special Inspector General for Afghanistan Reconstruction (SIGAR) John Sopko now warns: “SIGAR and many others believe this may be more devastating to the effectiveness of the Afghan security forces—and the survival of the Afghan state as we know it—than the withdrawal of our remaining military forces.” (Jane’s Defence News)

The war is not over
Meanwhile, the war continues. The latest report from the UN Assistance Mission in Afghanistan (UNAMA), issued Feb. 23, perversely finds that there has been an increase in the number of civilian casualties since the intra-Afghan talks began. The report states that while the year 2020 witnessed the lowest overall number of civilian casualties since 2013, there was a 45% increase in the three months following the opening of the new Doha talks in September, compared to the same period the previous year. The report counted 1,468 civilians killed in 2020, and 3,378 members of the security forces. “Anti-government elements” (Taliban and ISIS) are blamed for 62% of the civilian casualties, while “pro-government” forces (Afghan National Army and the US) caused 25%. This reverses a trend over the previous two years in which “pro-government” forces overtook insurgent forces in responsibility for civilian casualties. (Khaama Press, Jurist)

And while conflict casualties fell in 2020, instances of interference with much-needed aid operations surged—overwhelmingly due to the Taliban barring access to their territories. UN stats show that “access impediments” more than doubled in 2020 over the previous year, including demands for taxation, as the Taliban “expanded their range of operations.” (The New Humanitarian)

Taliban “acquiescence” certainly does not extend to an actual cessation of hostilities. Authorities fear that a March 12 attack by Taliban insurgents on an Afghan National Army outpost at Bagh-e-Pahlawan, in Sholgara district of Balkh province, may mark the opening of a new spring offensive. Five soliders were killed, and two armored vehicles seized by insurgents in the attack. (Khaama Press)