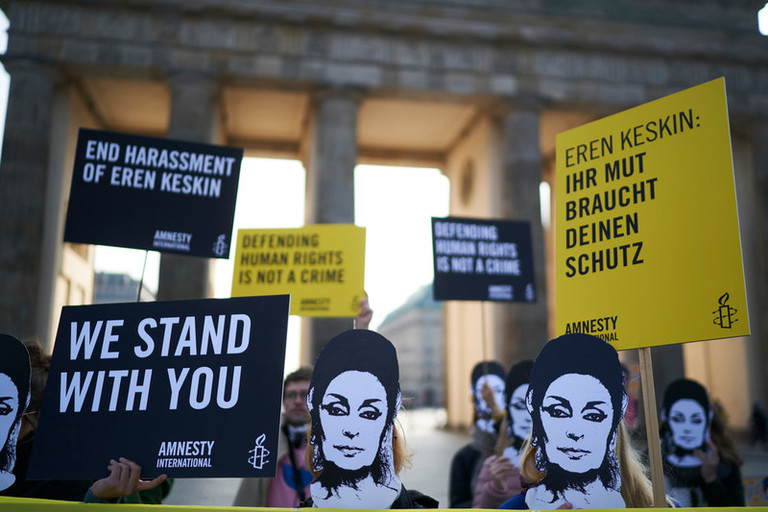 The 23rd High Criminal Court of Istanbul on Feb. 15 sentenced four former employees of the pro-Kurdish daily newspaper Özgür Gündem, shut down by a Turkish court order in 2016, to imprisonment on “terrorism” charges. Former editor Eren Keskin, who is also a prominent lawyer and human rights advocate, received a six-year sentence for “membership of an armed terrorist organization.” Özgür Gündem’s former publisher, Kemal Sancılı, and former managing editor, İnan Kızılkaya, received sentences of six years and three months on the same charge. Former editor-in-chief Zana Kaya was sentenced to two years and one month for “making propaganda for a terrorist organization.”

Özgür Gündem translates as “Free Agenda.” During its years of operation, it aggressively covered the conflict between the Turkish armed forces and the Kurdistan Workers’ Party (PKK), a militant political organization. The coverage had a wide impact, given that the newspaper’s circulation topped 100,000. Such coverage saw Özgür Gündem face accusations that it produced PKK propaganda, even when it publicly criticized the PKK. The Turkish government eventually shut the newspaper down and took action against its employees.

The sentences have been widely condemned. Milena Buyum, the Turkey campaigner at Amnesty International stated:

[A] human rights lawyer who has spoken out against injustice for more than three decades, has become the victim of injustice herself. Eren Keskin has dedicated her life to defending the rights of women, prisoners and fought for justice for the families of the disappeared. This verdict is yet another shocking example of anti-terrorism laws being used to criminalise legitimate, peaceful activities.

Similarly, Keskin’s lawyer Ozcan Kilic told Reuters that the verdict may have been swayed by political factors: “The court gave a very harsh verdict. We thought it was related to the developments in the operation in northern Iraq. Courts are influenced by conflicts.”

The sentences have not diminished Keskin’s advocacy for human rights. In a tweet, she wrote: “I have been in the Human Rights movement for 30 years. I have been put on trial many times, I’ve been in prison because of my thoughts. However, for the first time, I was deemed to be a ‘member of an armed organization’ and was sentenced. 6 years 3 months. I’m not going anywhere. I’m here.”

Sanctioning the employees of the closed newspaper exacerbates the media freedom issues troubling Turkey. In 2017, the Commissioner for Human Rights of the Council of Europe released a report concluding that deterioration of media freedoms in Turkey had reached “alarming levels.” Despite the condemning report, the atmosphere has continued to deteriorate. Last October, Human Rights Watch, among 10 other organizations, stated that “Turkey’s press freedom crisis is worsening amid growing state capture of media, the lack of independence of regulatory institutions, and a new social media law designed to clamp down on the remaining spaces for free comment.”

The four former employees are “at liberty pending their appeals,” according to Amnesty International.

From Jurist, Feb. 15. Used with permission.

Note: On the same day as the verdict, Turkish warplanes struck a supposed PKK hideout in northern Iraq, after the militants there allegedly put to death Turkish soliders they were holding captive.

See our last post on the ongoing crackdown on political opposition in Turkey.

Photo of solidarity demonstration in Berlin via Amnesty International