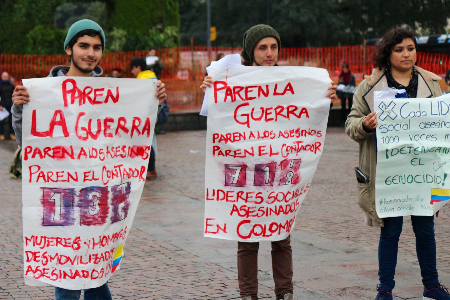 The Inter-American Commission on Human Rights (IACHR) on June 2 released its 2021 Annual Report, revealing that Colombia only partially adopted necessary measures to prevent human rights violations both by its security forces and unofficial paramilitary groups. The report called on Colombia to: “Adopt the appropriate measures for the members of the security forces who are allegedly involved in cases of violations of human rights or IHL [international humanitarian law] to be suspended from active duty until a final decision is issued in the disciplinary or criminal proceedings in such cases.” Noting “the reorganization and persistence of illegal armed groups on its territory,” the report also called on Colombia to “dismantle the armed groups that emerged after the demobilization of the paramilitary organizations or that continue to pursue the same objectives.” (Jurist, June 5)

On April 27, a coalition of Colombian human rights groups and survivors’ organizations released a statement decrying as “shocking” the decision by the International Criminal Court (ICC) to close its preliminary examination of possible war crimes carried out in the country. The preliminary examination, opened in June 2004, was formally closed in October 2021, after ICC chief prosecutor Karim Khan visited Colombia. Khan cited “significant progress achieved by domestic prosecutorial and judicial entities” in Colombia, and concluded a Cooperation Agreement with Bogotá to assure that such progress continues.

The statement in protest of Khan’s move, jointly issued by the International Federation for Human Rights (FIDH) and the José Alvear Restrepo Lawyers’ Collective (CAJAR), said that closure of the examination “could mean that hundreds or thousands of victims of crimes under the jurisdiction of the ICC will be deprived of knowing the truth and obtaining justice concerning the crimes committed. In Colombia, in spite of advances in some areas, there is still a systematic absence of investigation of those responsible at the highest levels for crimes under the jurisdiction of the ICC.” (Contagio Radio, May 4)

On April 12, the Movimiento Defendamos la Paz, representing rights defenders and survivors, issued a statement in response to President Iván Duque’s address to the UN Security Council that day, charging that Duque “has abandoned the peace agreement in its entirety, in violation of state commitments, fulfilling only parts that he and his ruling party consider acceptable.” (El Tiempo, The City Paper, Bogotá, April 12)

Colombia’s 2016 peace accord with the FARC guerillas established a special justice system for crimes related to the armed conflict, and commits the government to stronger measures to protect human rights.

Assassinations and impunity continue
The ongoing wave of assassinations of social leaders across Colombia shows no sign of abating. The June 9 slaying of Danilo de Jesús Madrid, a campesino human rights advocate in Tarazá pueblo, Antioquia department, brought to 84 the number of social leaders assassinated in 2022, according to rights monitor INDEPAZ. The organization counts 930 such assassinations under the government of Iván Duque  There have been prosecutions in very few of these cases.

In other recent cases, two functionaries of the municipal government of the village of El Cerrito, Valle del Cauca department, were slain by gunmen mounted on a motorcycle May 10. (El Espectador, May 11) In the San Vicente del Caguán region of Caquetá department, local campesino leader Aldemar Urquina Cruz was killed May 7. He had been president of the Communal Action Committee at the vereda (hamlet) of Morrocoy, El Doncello municipality. (El Espectador, May 10)

On May 3, Mauricio Fori Balanta, a local leader of the Mixed Syndicate of Workers & Public Employees, was slain by gunmen on a motorcycle on the streets of Cali. He had been a member of the union’s human rights committee. (Contagio Radio, May 4)

Bleeding Cauca
The southwestern department of Cauca has emerged as the most impacted by the violence, and was hit especially hard by a wave of killings earlier this year.

On March 21, five youth were abducted and put to death by a local paramilitary group in the municipality of Argelia, Cauca. Richard Betancourt, president of the Communal Action Committee in the local vereda of Santa Clara and a leader of Argelia’s Campesino Guard, was also slain that day. (Prensa Rural, March 21)

On Jan. 29, the lifeless body of Deisy Sotelo Anacona, a leader of Llano Alto vereda in Argelia municipality, was discovered, six days after she had been adbucted from her home by armed men. Two days after the body was found, her husband Germán Ortiz Luligo was “forcibly disappeared.” (El Espectador, Jan. 31; Contagio Radio, Jan. 29)

On Jan. 28, the bodies of four local residents were found, left at various points in the coastal municipality of Timbiquí. (El Espectador, Jan. 29)

On Jan. 24, Albeiro Camayo Güetio, former coordinator of the Indigenous Guard in Las Delicias resguardo, Buenos Aires municipality, was slain—apparently in retaliation for his efforts to expel paramilitary groups from the territory. (Amnesty International, Feb. 22) On Jan. 14 a local youth, Breiner Cucuñame, was killed, apparently during an incursion by “dissident” FARC guerillas at Las Delicias. (InfoBae, Jan. 18)

The rightist paramilitary networks appear to be behind most of the slayings. One, the notorious Águilas Negras, has been openly leaving leaflets in public areas around Cauca threatening local social leaders. The most recent such leaflet, stating “you have been warned,” especially named progressive Sen. Feliciano Valencia and senator-elect Aída Quilcie. (El Espectador, May 1; Contagio Radio, April 30)

Indigenous and campesino leaders targeted
Indigenous leaders are particularly marked for death around the country. On April 30, María José Arciniegas Salinas, a young community leader of the Siona indigenous people, was slain at El Hacha resguardo, Puerto Leguízamo municipality, in Putumayo department, near the border with Ecuador. The community named a local paramilitary group, the Comandos de Frontera, as behind the killing. (Contagio Radio, May 2)

On Feb. 27, Dilson Borja Domicó, a leader of the local Embera Indigenous Guard, was killed in the town of Turbo, Antioquia, in Colombia’s northern Gulf of Urabá region. Urabá is the principal stronghold of the Clan del Golfo and its associated paramilitary force, the Gaitanistas. (Prensa Rural, Feb. 27)

On Feb. 22, two legendary leaders of the campesino struggle in the Magdalena Medio region were slain in a raid by gunmen at the home of a comrade in San Martín municipality, Cesar department. Teófilo Acuña and Jorge Tafur of the Federación Agrominera del Sur de Bolívar, had been building an alliance of campesinos and artisinal miners in the region to press for land rights. (Cambio, Prensa Rural, Feb. 23) The conflicted Magdalena Medio straddles the departments of Cesar and Bolívar.

State complicity
On May 28, the Colombian Commission of Jurists (CCJ or Coljuristas), turned in a report to the Special Jurisdiction for Peace (JEP), entitled “The Internal Enemy,” documenting continued collusion between the ostensibly outlawed paramilitary networks and the official security forces. The report charges that there is a “criminal structure made up of the organisms of state intelligence and the paramilitaries,” which oversees the “planning, execution and cover-up of assassinations and disappearances” of social leaders and human rights defenders. The document charges involvement by state agents in several high-profile killings over the past generation, including the 1999 assassination of comedian and peace advocate Jaime Garzón. (El Tiempo, May 28)

Colombia’s official human rights watchdog, the Defensoría del Pueblo, released figures in January, finding that 145 social leaders and rights defenders were assassinated in the country in 2021. The most impacted departments were Antioquia, with 24 such assassinations, and Cauca, with 22. (El Tiempo, Jan. 18)