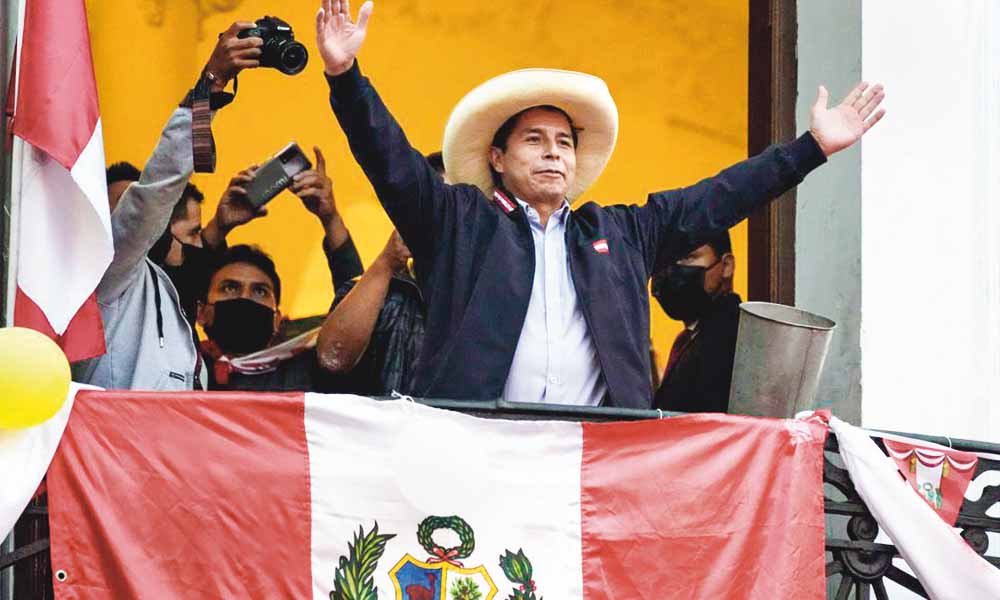 Proclaiming that “change is coming,” Pedro Castillo, a left-populist political outsider and former school teacher, was sworn in as Peru’s new president on July 28—the bicentennial of the country’s independence from Spain. The following day, a second symbolic inauguration ceremony was held at the Battlefield of Ayacucho, site of the 1824 battle that secured Peru’s independence and put an end of Spanish colonialism in South America. (TeleSur, Reuters)

Hailed as Peru’s “first poor president” because of his campesino roots, Castillo overcame weeks of voter fraud allegations (with little to no evidence) lodged by losing far-right opponent Keiko Fujimori. He has pledged to redraft the constitution and raise taxes on mines—but also expel migrants to “tidy up the house.”

Castillo assumes office amid a profound political crisis and growing social polarization—not to mention by far the highest COVID-19 death rate in the world. Price gouging and other corruption in the healthcare sector has made the pandemic even worse in Peru, where one in 100 children has been orphaned by the coronavirus, according to a Lancet study. Poverty—defined as earnings of less than $100 a month–is up 10%  since 2020, and now affects nearly a third of the population. (The New Humanitarian)

Castillo named as his cabinet chief, or prime minister, Guido Bellido, a newly elected lawmaker from Cuzco who is on the more hard-left wing of Castillo’s Perú Libre party. The anti-terrorist arm of the Fiscalía, Peru’s chief prosecutor, opened an investigation into him earlier this year over comments he made in an interview that appeared to defend Sendero Luminoso. However, upon being sworn in as a member of Congress and chief of the cabinet, he has immunity from prosecution. (Perú21, DW)

Bolivia’s President Luis Arce, who attended the symbolic inauguration in Ayacucho together with ex-president Evo Morales, has announced that a “Binational Cabinet” will be installed jointly with Castillo’s government to address matters of importance to both countries, and in which social movements will participate. Moves toward establishing a Peru-Bolivia Binational Cabinet had been undertaken by Morales before he was removed in a coup d’etat in 2019. (Kawsachun News, TeleSur, Andina)

However, Vladimir Cerrón, the former governor of Junín region who founded Perú Libre in 2008, tweeted his speculation about a “caviar conspiracy” on the part of Peru’s elite political class to co-opt Castillo, stating “We have to assure the change that the Fatherland needs!” Two days before the inauguration, he mobilized supporters to rally outside Castillo’s Lima home. They chanted: “If Castillo goes wrong, the party will straighten him out!” Cerrón, while still a powerful figure on the left wing of Perú Libre, is under restricted movement as the Fiscalía investigates corruption charges against him, related to the clean-up of the heavily polluted La Oroya industrial site. (El Comercio, Gestión, Libertad Digital, LAT)

Castillo is certain to face obstruction from Congress, where an opposition-led alliance won a vote for the body’s leadership two days before the inauguration. The new president of Congress is to be María del Carmen Alva of the centrist Acción Popular party. A more hard-right contender, retired military general Jorge Montoya of Renovación Popular, was defeated. Alva has pledged to seek an “equilibrium of powers” in Congress, and says she considers herself anti-fujimorista. But Fujimori’s Fuerza Popular bloc supported Alva, seemly angling for broader support to block Castillo’s agenda. Fujimori promised that her party will be a “wall of contention” to Castillo’s plans for a new constitution. (La República, Reuters, Gestión, Latin America News, Canal N)