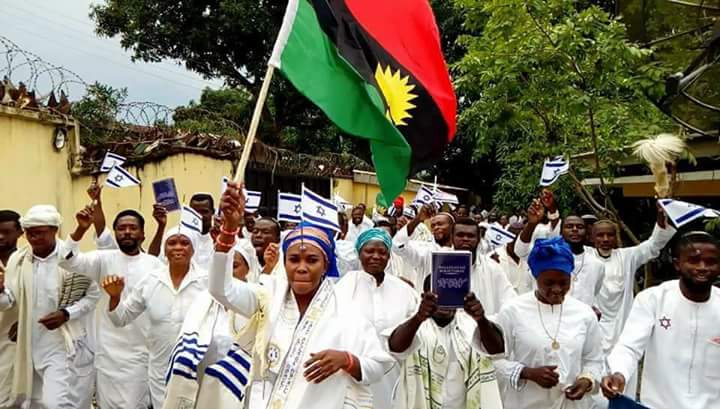 Scores of Jewish worshipers were reportedly arrested when Nigerian state security forces raided a synagogue in the Igbo village of Orji, Imo state, on Oct. 30. Local media reported that soldiers burst into the temple during Shabbat services and fired in the air before taking several away in military vans, apparently on suspicion of supporting the Biafra separatist movement. “Among those arrested is the head of the Association of Jewish Faith Synagogue, whom they mistreated and took away,” one witness said.

Although it has received little media coverage outside the immediate region, there have reportedly been several such incidents in the southeastern Biafra region since the recent re-emergence of the independence movement; government forces are said to have razed six synagogues last year, and arrested dozens of Igbo worshipers. (Gazette Africa, NewsTrack, Nigeria)

Most of the Igbo (also rendered Ibo) are Christian, and have been targeted in attacks by Islamist militants in recent years. However, a small community of Igbo Jews has lived in the Igboland region for over 1,500 years. Their existence seems to be somewhat controversial; three Israeli film-makers attempting to produce a documentary about them were arrested earlier this year, and held for 20 days before being deported. (BBC News, Israel Hayam)

Igboland was the heart of the breakaway state of Biafra that was declared in 1967, sparking a brutal four-year civil war in Nigeria, in which up to 3 million people may have lost their lives. Nnamdi Kanu, leader of the Indigenous People of Biafra (IPOB) organization, which is agitating for a renewed secessionist initiative, is currently on trial in Abuja on “terrorism” charges. IPOB charges that the region has always been economically and politically marginalized under Nigerian rule. (Al Jazeera)