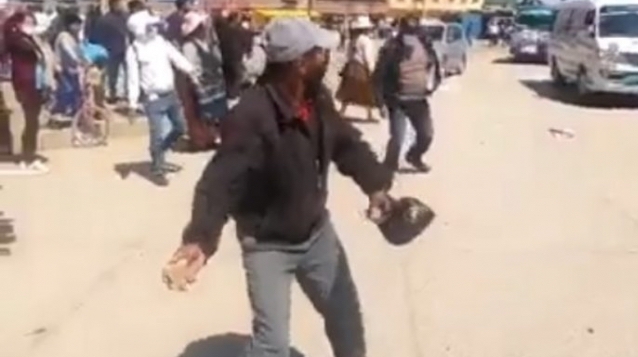 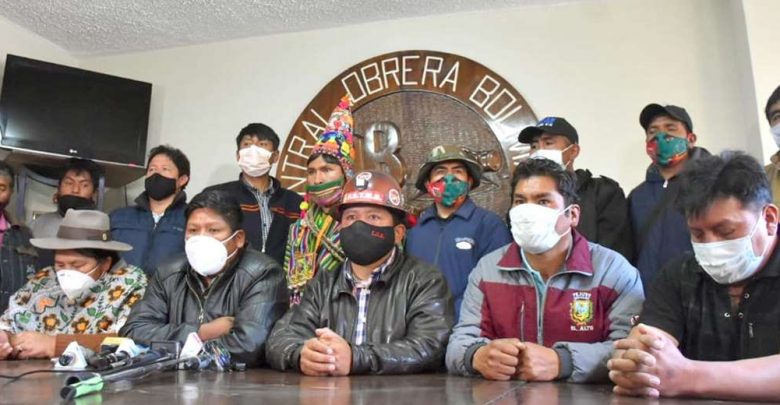 A thousands-strong march through the Bolivian highland city of El Alto was followed by a cabildo, or mass meeting, in which unions and popular organizations agreed to immediately begin an “indefinite” general strike, demanding that new elections be held on schedule. The country’s first elections since the ouster of president Evo Morales last year were slated for Sept. 6, but the government of interim president Jeanine Añez has postponed them to Oct. 18, citing the COVID-19 pandemic. The cabildo was called by the Bolivian Workers Central (COB), the country’s main trade union bloc, and included representation from campesino organizations and El Alto’s powerful alliance of working-class neighborhood organizations. COB leader Juan Carlos Huarachi affirmed: “If we join together as miners, campesinos, the middle class and El Alto, we can be dynamite.” (Photo: ERBOL via Opinión)

At least six were killed and some 20 injured when Bolivian army and National Police troops opened fire on protesters demanding the reinstatement of deposed president Evo Morales in the working-class city of El Alto. Protesters had been blockading the entrance to Senkata gasworks and oil refinery in the city for three days when troops attempted to clear the gates to allow tanker-trucks through to supply gasoline to La Paz. The blockade of the Senkata plant has caused shortages in La Paz, and cut-backs in public transport. The hydrocarbons minister, appointed by the new de facto regime, appeared to justify the violence, saying, “Except for use of the gas, we seek to avoid aggression.” (Photo via Carwil Bjork-James) 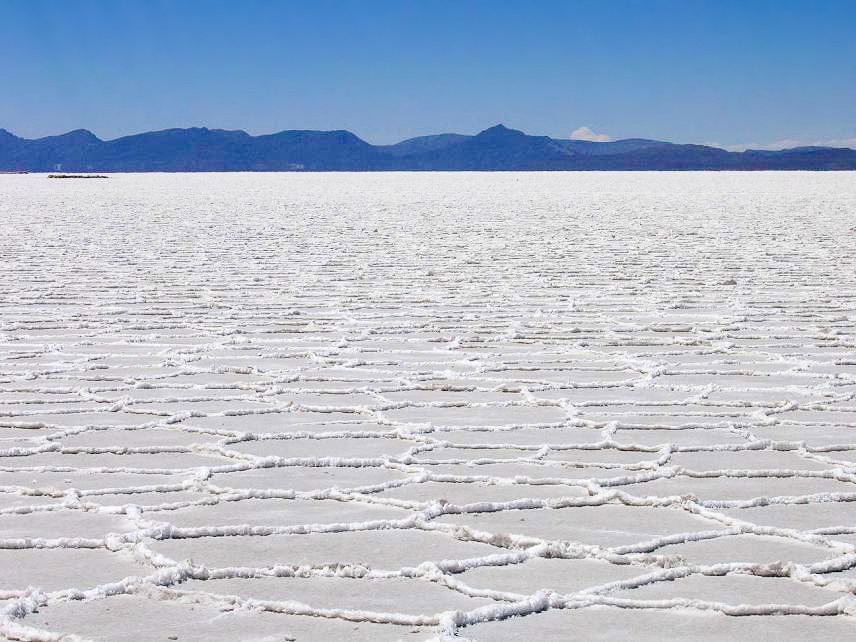 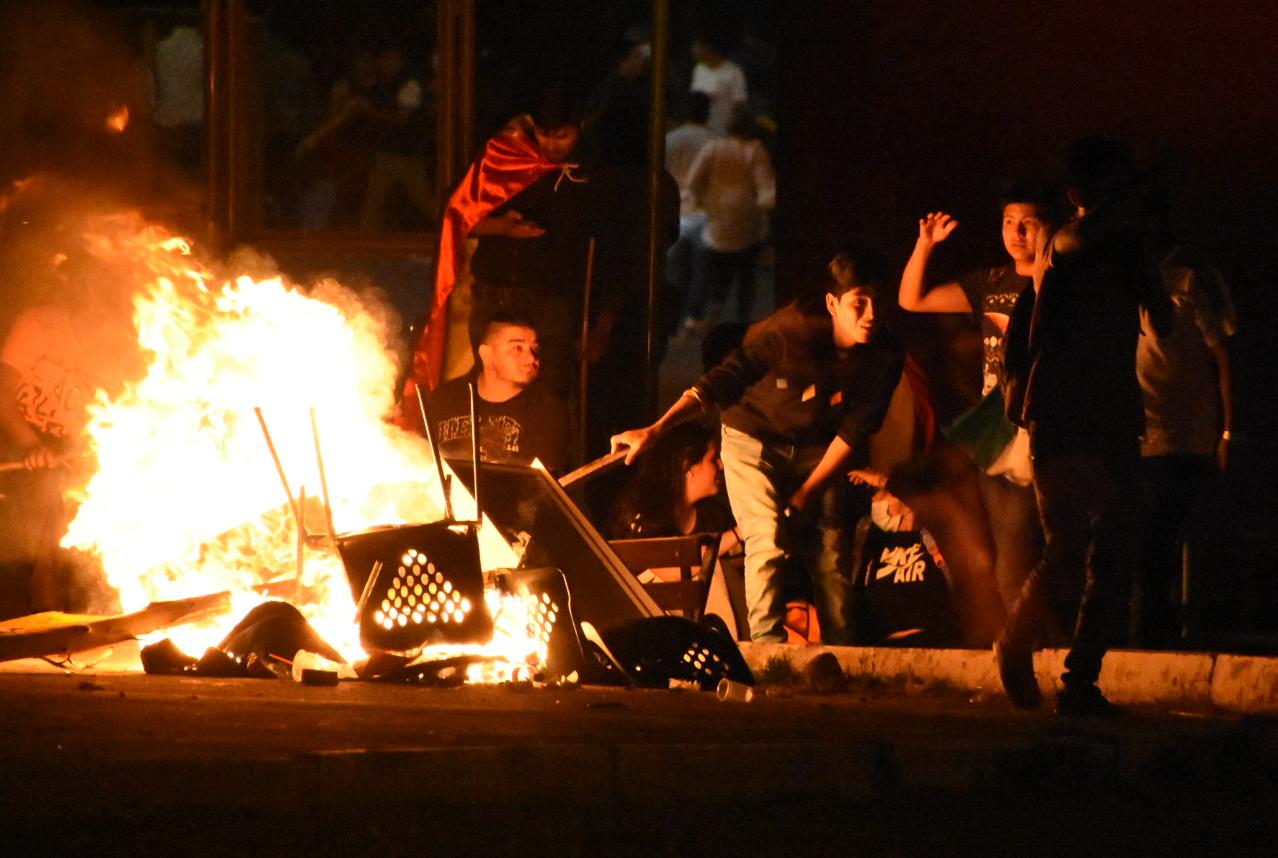 Riot police have clashed with protesters in cities across Bolivia as the Superior Electoral Tribunal (TSE) announced a clear win for incumbent President Evo Morales 24 hours after the elections, obviating the need for a second round with conservative challenger Carlos Mesa. The announced victory followed a sudden halt in the counting, before which Morales had been falling just short of the percentage needed to avoid the first run-off in his nearly 14 years in power. Crowds set fire to the TSE offices in Sucre and Potosi, and protesters torched ballots in Tarija. Street clashes erupted between Morales and Mesa supporters in La Paz and Santa Cruz. Mesa is charging fraud, saying, “We are confident that the citizenry will not accept these completely distorted results.” (Photo: OpiniónBolivia via Twitter)

US senators Ted Cruz, Bob Menéndez and Dick Durbin introduced a resolution calling on Bolivia's President Evo Morales not to stand for re-election this October. Cruz said Bolivia is going in a "very dangerous direction, aligning itself with illegal and illegitimate regimes, including that of [Nicolás] Maduro in Venezuela. It is important that all parties respect the constitution of Bolivia, which includes term limits." Bolivia saw a wave of strikes and protests after a December ruling by the country's Supreme Electoral Tribunal allowing Morales to run for a fourth consecutive term in the 2019 election. The resolution comes just as Bolivia has announced a new partnership with Chinese company Xinjiang TBEA Group to exploit the country's valuable and largely untapped lithium deposits. China has for years been seeking deals to exploit Bolivia's strategic lithium reserves, in what some see as a global design to establish a "stranglehold" on the planet's rare earth minerals. (Photo via NACLA)

Bolivian President Evo Morales announced that his government will bring suit against Chile before the World Court seeking compensation for waters of the disputed Río Silala.

Bolivia: Potosí mine at issue in regional strike

Protesters cut off access to the Bolivian mining city of Potosí for almost a month in a dispute with the central government over development and investment in the remote region.

Bolivia's President Evo Morales, running for a third term that the opposition calls unconstitutional, appealed to his followers to refrain from launching a  "dirty war."

Three were killed as thousands of independent miners blocked highways across Bolivia  to protest a pending law that would impose restrictions on their cooperatives.

With three dead in accidents, the Dakar Rally Raid cross-country motor-race is being blocked by campesinos in Argentina, with comrades in Bolivia and Chile at the ready.

Bolivia is mobilizing police to the route of the upcoming Dakar Rally Raid cross-country motor-race following a pledge by Aymara protesters to blockade it with their bodies.