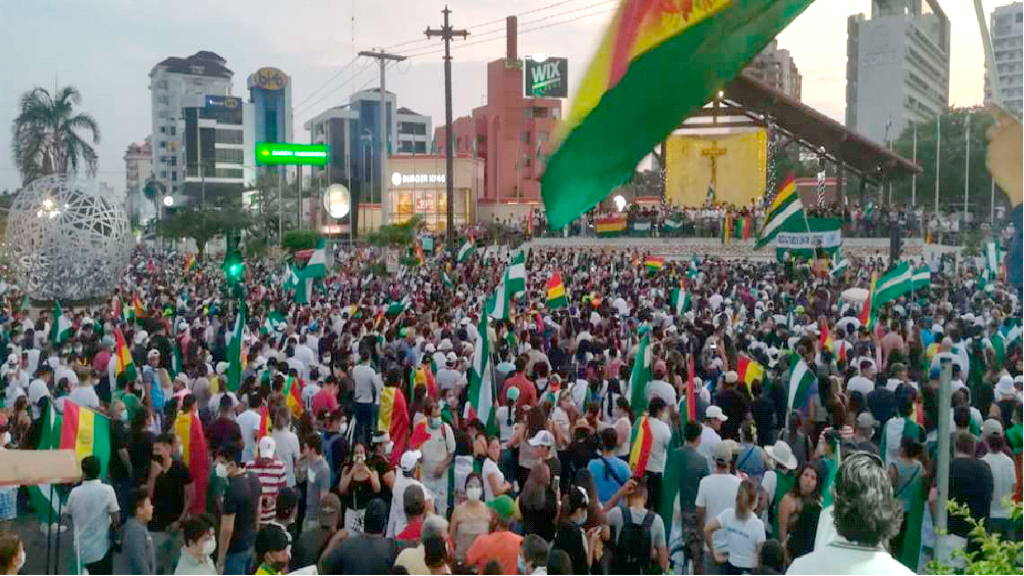 In Bolivia’s eastern lowlands, known as Oriente, the regionally powerful right-wing social networks have responded rapidly to the victory of socialist candidate Luis Arce in the weekend’s presidential elections. Hundreds filled the streets of the region’s principal city, Santa Cruz, on Oct. 21, and some 5,000 the previous day, waving Bolivian flags, honking car horns and chanting “¡Anulación, Anulación, Anulación!” However, the protesters’ accusation that Arce won through “fraud” was explicitly rejected by Manuel González, head of the OAS mission in Bolivia. He said in a statement: “The people voted freely and the result was clear and overwhelming, which gives great legitimacy to the incoming government, the Bolivian institutions, and the electoral process.”

Santa Cruz was the only Bolivian department to hand a majority to Luis Fernando Camacho, the region’s longtime right-wing civic leader, who placed a distant third in the presidential race. His followers have now called for a “paro cívico” (civic strike) to demand annulment of the election results. Protests against Arce’s victory have also been held in Cochabamba, Sucre and other cities.

Marianela Paco, a longtime leader of Arce’s Movement to Socialism (MAS), called for the protesters to desist. “Learn how to lose, learn to respect the Bolivian people and the decision of the majority to live in peace,” she told Radio Fides. “To continue with these violent, racist and intolerant attitudes that respond to oligrachical logic—I believe this is not an option in Bolivia.” (InfoBae, InfoBae, ATB Digital, La Razón, Eju!)

Indigenous voices on election integrity
Ironically, the most serious questions about the integrity of the vote concerned the lack of ballots in poor indigenous communities within Santa Cruz department—those least likely to have supported the right-wing candidates. Such claims were especially raised by Aida Micaela Gil, candidate for the lower-house Chamber of Deputies with the Chiquitana Indigenous Organization (OICH), who was running on a platform of titling indigenous lands. (Prensa Latina, EFE)

Another concern about the election was raised by Rafael Quispe, vice-minister for decolonization with the interim government, who cited the requirement under Article 234 of Bolivia’s 2009 Constitution that all candidates for public office be able to speak at least two of the country’s 36 official languages. In practice, this means Spanish and at least one of the country’s many indigenous tongues. Arce is of mestizo background, and it is not clear that he speaks any indigenous language. Quispe sent a letter to the Supreme Electoral Tribunal demanding clarity in the matter. (Erbol)

Oriente in flames —again
All this takes place amid devastating forest fires across Oriente, which prompted the interim government to declare a state of emergency a week before the elections. In 2019, wildfires destroyed more than 6 million hectares in the Bolivian Amazon. So far this year, 1.1 million hectares have burned, according to official figures. The non-governmental Friends of Nature Foundation (FAN) says the area destroyed is twice as large. Authorities report more than 50 active fires across the region, but a far greater area is subject to smoke hazard. Hundreds of indigenous communities have been impacted, especially of the Chiquitano people. More than 120 fires have been reported since August—and, alarmingly, many have been within protected areas, including Noel Kempff Mercado National Park, a UNESCO World Heritage Site. Conditions have been exacerbated by the worst drought Bolivia has experienced in years. (TRT World, Mongabay, Mongabay, Mongabay)