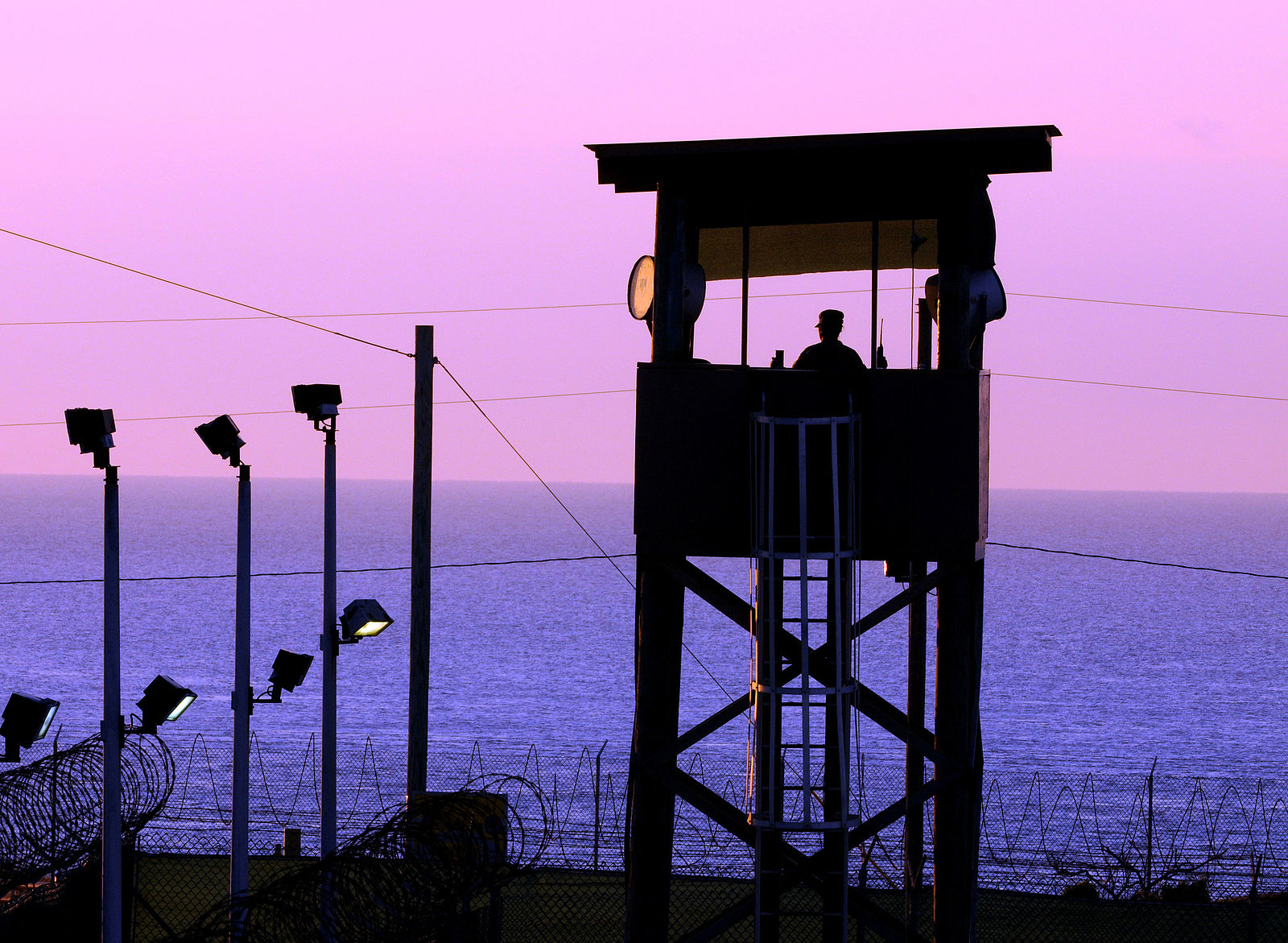 The US Department of Defense announced the release of Asadullah Haroon Gul, an Afghan national, who had been held for 15 years without charge at the Guantánamo Bay detention camp. Gul was incarcerated at Guantánamo in 2007 on accusations of being a member of al-Qaeda and Hezb-e-Islami (HIA), an insurgent group that fought against the US in Afghanistan. HIA signed a peace agreement with the US-backed Afghan government in 2016. Human rights organization Reprieve subsequently filed a habeas corpus petition demanding Gul’s release. (Photo: Gino Reyes/Wikimedia Commons) 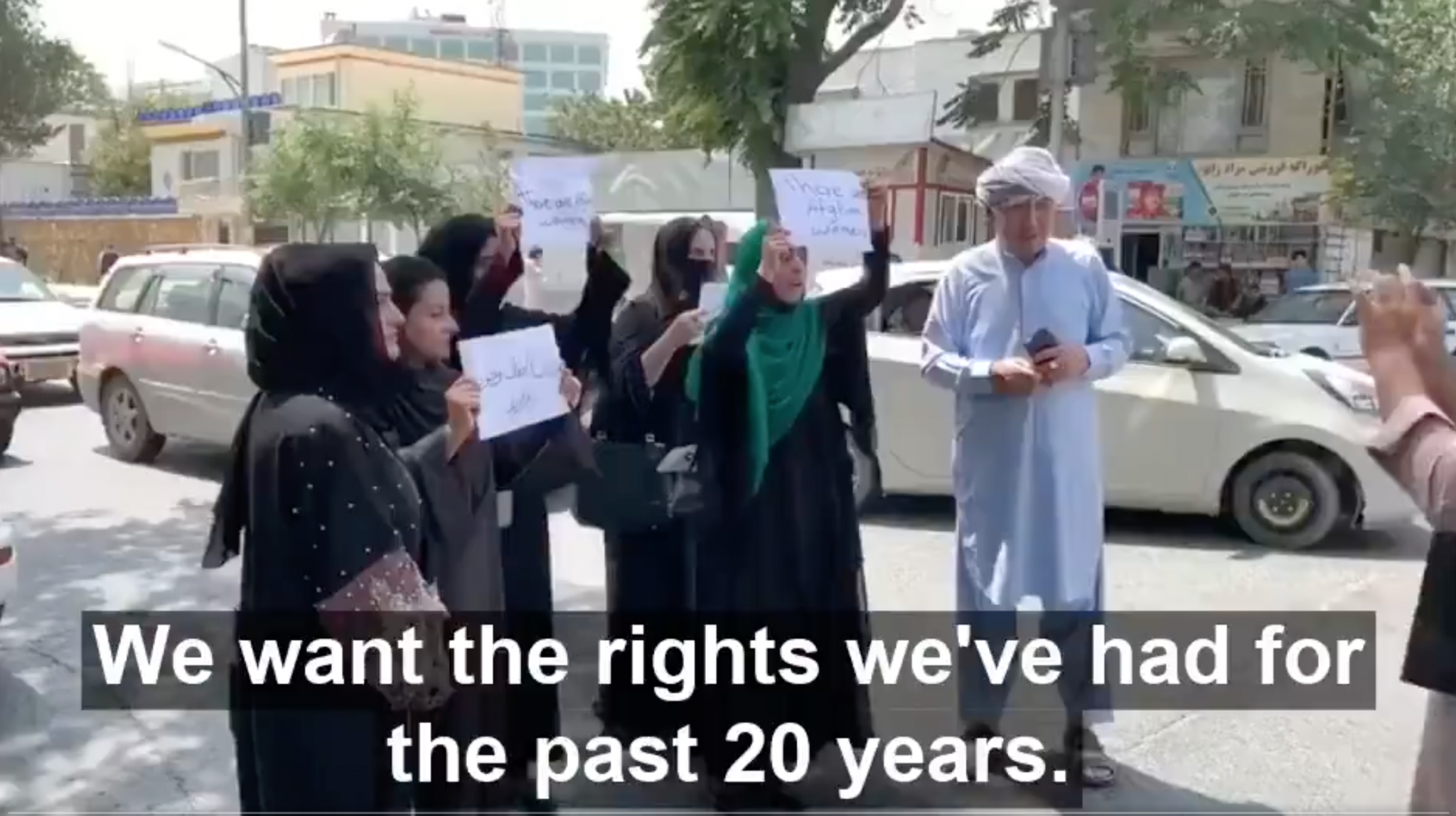 As the Taliban, now in full control of Kabul, pledge an “inclusive” Afghan government in prepared press statements, deadly repression against anti-Taliban protesters is reported from the eastern city of Jalalabad. The day before Afghanistan’s independence day, protesters took to the streets of Jalalabad waving the black, red and green national flag—and tearing down the white and black Tawhid flag of the Taliban. Witnesses said Taliban fighters fired on protesters indiscriminately, and at least three were killed. On the day that Afghanistan won full independence from Britain in 1919, a similar protest was held in Khost, where social media videos again show Taliban fighters firing on demonstrators. No casualties were reported, but the city has been placed under a 24-hour curfew. A small demonstration by women demanding that their rights be respected was held  outside a police precinct in Kabul. “We want the rights we’ve had for the past 20 years,” signs read.  (Photo via Twitter)

Guantánamo Bay detainee Abu Zubaydah, who has been held for 19 years without charges or a trial, filed a complaint with the UN Working Group on Arbitrary Detentions (UNWGAD) requesting intervention in his case. Zubaydah was captured in Pakistan after the September 11 attacks and was held and tortured by the CIA in various top-secret “black sites.” The CIA originally believed that Zubaydah was a close associate of al-Qaeda, but after four years of interrogation, they concluded that he was not linked to the group. He was then moved to Guantánamo in 2006. The US government has justified Zubaydah’s continued detention by asserting its broad authority under the Authorization for Use of Military Force (AUMF). Under the AUMF, passed after 9-11, detainees can be held until the “cessation of hostile activities,” But Zubaydah asserts in his complaint that this “law of war” rationale is in conflict with international human rights laws. (Photo: Wikimedia)

The Supreme Court denied certiorari in the case of Moath Hamza Ahmed al-Alwi, a Yemeni who has been held as an “enemy combatant” at Guantánamo since 2002. Al-Alwi was captured in Pakistan in late 2001, and the government concluded that he had fought in Afghanistan as part of a Qaeda-commanded unit. Al-Alwi denied this unsuccessfully during his original round of habeas corpus proceedings, and in 2015 initiated a new habeas case arguing that the nature of US involvement in Afghanistan had changed such that the use of military detention is no longer justified under the 2001 Authorization for Use of Military Force (AUMF). The US Court of Appeals for the DC Circuit disagreed, and the Supreme Court has now declined to review the appellate court’s conclusion. (Photo via Jurist)

Amnesty International called the Guantánamo Bay prison camp a "stain on human rights" on the eve of the facility's seventeenth anniversary. Guantánamo currently holds 40 detainees, many of whom were tortured by the CIA before being transferred to the facility. Some of the detainees have been cleared for transfer for years, but still remain at the facility. Some have been waiting for transfer as far back as 2010. Since its opening, the Guantánamo facility has housed around 800 prisoners, many without formal charges or due process. (Photo via Jurist)

The European Court of Human Rights found that Lithuania and Romania had violated articles of the European Convention on Human Rights by allowing secret CIA prisons to operate on their territory. Lithuania had allowed the CIA to open a "black site" on its territory, where the CIA subjected the applicant, Zayn al-Abidin Muhammad Husayn AKA Abu Zubaydah, to "ill-treatment and arbitrary detention." Lithuania must pay Husayn 130,000 euros ($150,000). The applicant in the Romania case, Abd al-Rahim Husseyn Muhammad al-Nashiri, was transported to a "black site" on that country's territory territory, and faced capital charges in the US. The court apprehended Romania for transferring al-Nashiri to the US when it was likely he would face the death penalty. Romania must pay the applicant 100,000 euros ($115,000). Both men remain interned at Guantánamo Bay. (Photo: WikimediaCommons)

The Trump administration has yet to repatriate Guantánamo detainee Ahmed Muhammed Haza al-Darbi to Saudi Arabia, effectively missing the deadline established in his 2014 plea deal. Darbi pleaded guilty and admitted to involvement in al-Qaeda operations including the 2002 attack on a a French-flagged oil tanker near Yemen. In his pre-trial agreement, it was determined that, contingent on his cooperation, he would be sent back to Saudi Arabia to serve the duration of his sentence. Feb. 20 marked four years from the close of the deal and Darbi was not repatriated to Saudi Arabia. (Photo: Wikimedia Commons)

Donald Trump signed an executive order to continue operations at the Guantánamo detention center—not only allowing those currently detained to remain detained, but also permitting the US to bring new persons to the facility.  The order comes the same day Trump pledged "to keep open the detention facilities at Guantánamo Bay" in his State of the Union address—to applause from Republican lawmakers. It also comes nearly nine years to the day after Obama's executive order to begin the process of closing the facility. (Photo: Wikimedia)

Military judge James Pohl ruled that no wrongdoing occurred when he authorized the destruction of a CIA secret prison, or "black site," despite the fact that a protection order was in effect on any remains from the CIA black sites. Prosecutors, citing national security powers, obtained permission from the judge to give defense attorneys photographs and a diagram of the site as a substitute for preservation the actual facility. The question concerned the admissibility of evidence possibly extracted by torture in the 9-11 case now underway at Guantánamo Bay. From 2002-2006, prisoners at the black site were subjected to waterboarding, sexual abuse, and other forms of torture. (Photo: Wikimedia)