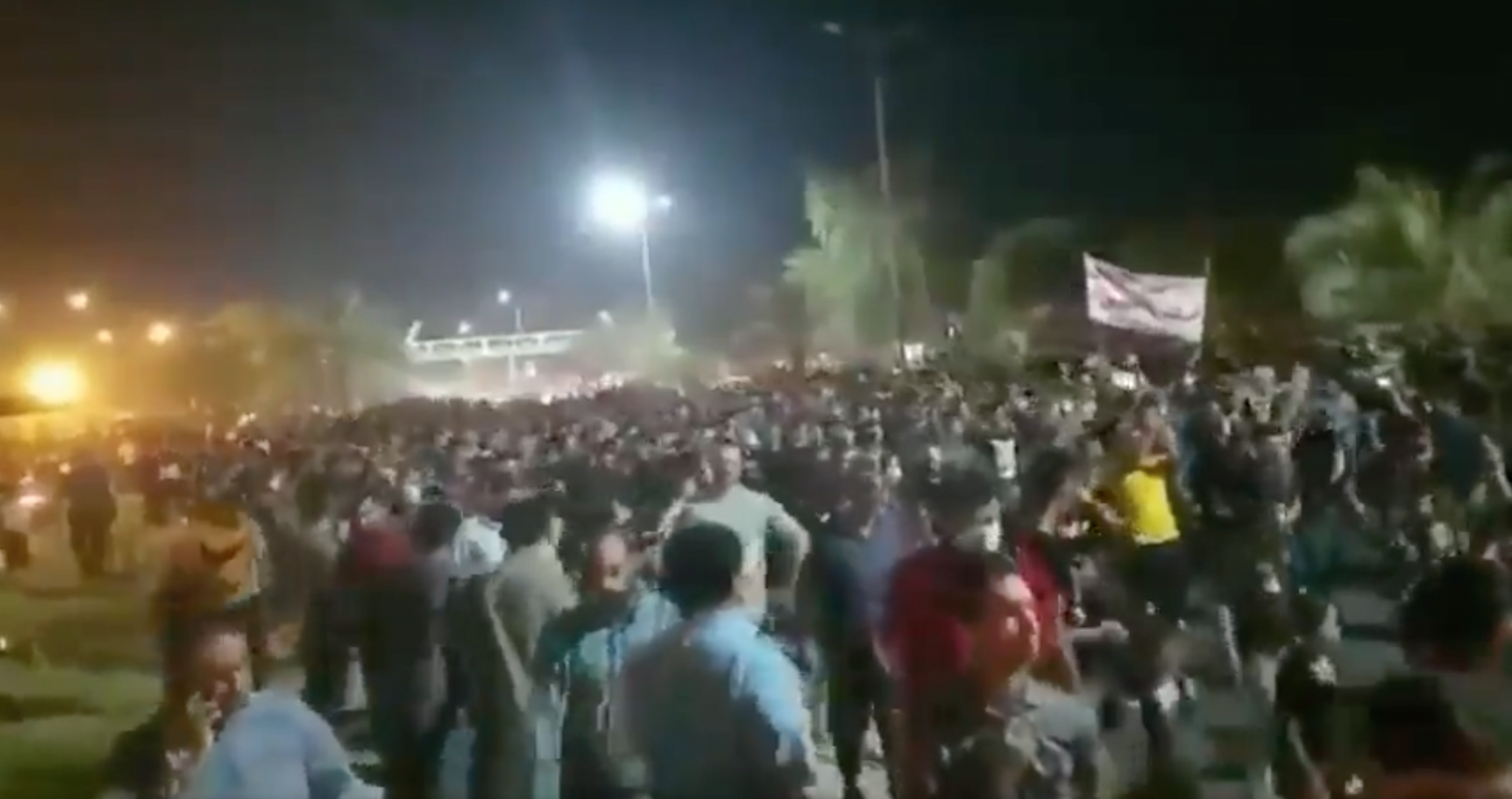 Iran is experiencing another wave of mass protests and strikes as economic, social, political, environmental and health problems make it impossible for the large majority of the population to have the bare minimums needed to live.

Petrochemical strikes, protests sgainst water shortage
A new wave of mass protests over severe water shortage in the mainly ethnic Arab province of Khuseztan began on July 15. Protesters’ slogans have included: “Down with Dictatorship,” “Down With Khamenei,” “We Don’t Want an Islamic Republic,” and “The People Want the Regime to Fall.” Government security forces have shot and killed at least eight protesters and injured and arrested many others. However, solidarity protests have started in Azarbaijan, Kurdistan, Isfahan, Sistan & Baluchistan, and Tehran. Iranian filmmakers, teachers and writers have co-signed a joint statement in support of the protests.

In the words of a statement of solidarity by the Tehran Bus Workers’ Syndicate: “The lack of water in Khuzestan today is rooted in the unprofessional, rapacious and profit-centered policies of the prior decades of capitalism in oil extraction and use of water for the steel industry, the income from which does not go to the people. These insatiable policies have deprived the people of Khuzestan of safe drinking water. Water is shut off for long hours and it is lacking for basic needs. Farmers and cattle growers have also been damaged and lost their livelihoods.”

The latest protests have followed a series of nationwide strikes by temporary contract workers in Iran’s oil and gas industry, which is also heavily based in Khuzestan. The strikes, which began on June 19 and have spread to a hundred production sites, are demanding permanent employment status, a $500 monthly wage, safe working conditions and the right to organize and be free of police surveillance. Haft Tapeh sugar cane workers on strike in Khuzestan are also asking for COVID vaccination and expressing solidarity with protests over the lack of water.

Economic crisis and COVID pandemic
Iran continues to suffer from a massive economic crisis brought about by the costs of its regional imperialist interventions in Syria, Iraq, Lebanon, Yemen, its nuclear and missile programs, and the effects of US economic sanctions. The official minimum wage is approximately $120 per month in a country where the cost of bare necessities for a family of four is $500 per month. Electricity is shut off for several hours on a daily basis. Access to the internet is becoming more limited or impossible for many because of the cost, and government restrictions.

In this situation, the COVID pandemic has been wreaking havoc on the population. The Delta variant of COVID continues to spread widely. Over 95% of the population is not vaccinatedand has no access to any vaccines, much less safe ones.

The official number of deaths is approximately 88,000, but the real figures are believed to be much higher. A large part of the population of 83 million has been infected. However, no accurate figures exist because of government controls on information.

COVID is spreading rapidly in Iran’s prisons, which have an official population of 190,000. Women prisoners are also suffering and dying from COVID. They include journalists, teachers, feminist and labor activists, students, environmentalists, Kurdish and Arab civil right activists, as well as Baha’i and Sufi women.

Women prisoners and Afghan refugees
Nasrin Sotoudeh, imprisoned feminist human rights attorney and defender of the “Girls of Revolution Avenue” protest group against the mandatory headscarf, is suffering from a variety of health problems in addition to COVID. Narges Mohammadi, a feminist activist against the death penalty who has been nominated for the Nobel Peace Prize, was released last year after a long prison sentence—only to receive another prison sentence which also includes 80 lashes for continuing to oppose the death penalty and “endangering national security.” She has been fighting this sentence, and has attended protests in solidarity with the people of Khuzestan, striking workers and the families of political prisoners. In a recent interview, she called Iranian women’s struggles “the Achilles heel of the Iranian regime.”

Sepideh Gholyan, a feminist and labor activist imprisoned in Khuzestan, continues to write about the plight of ethnic Arab women prisoners. She has been savagely beaten in prison and is now on hunger strike.

Afghan migrants and refugees, who number approximately 3 million in Iran, continue to be expelled (450,000 deported since 2020). The Iranian regime has been brokering negotiations between the Taliban and the Afghan government under the direction of Iranian foreign minister, Javad Zarifand—helping the Taliban strengthen their power even though the Taliban have been killing members of the Shi’a Hazara population in Afghanistan.

Iran’s continuing regional ambitions and US imperialism’s ‘solutions’
In the midst of all these crises and protests, the Iranian government maintains its regional imperialist interventions in Syria, Iraq, and Lebanon. It continues its plots to kidnap and assassinate opposition activists in exile.

It also continues to develop its nuclear and missile programs, and has stopped its negotiation with the US Biden administration on returning to the JCPOA nuclear agreement.

The June “election” of Ebrahim Raisi as Iran’s next president had the lowest rate of mass participation—even by Iran’s standards, which were very low to begin with. Raisi was previously the head of Iran’s judiciary and immediately prior to that, the head of GHORB, the construction conglomerate of the Islamic Revolutionary Guard Corps (IRGC). He is infamously known as a member of the “Death Commission” which ordered the executions of thousands of political prisoners in 1988. Under his watch, approximately 1,500 people were killed by government forces during the November 2019 uprising. Amnesty International has condemned him for committing crimes against humanity.

New York Times columnist Thomas Freedman reveals imperialist inhumanity in his recent column on Iran, where he offers a “solution” that is “the best anyone can hope for with Iran.”

He argues that the US with the help of Gulf states should offer to fully compensate for the financial aid that the Assad regime received from Tehran if the dictator will kick Iran out of Syria. This will maintain Russia and Turkey as dominant regional powers, and assure the continuation of the Assad regime. This, he says, would reduce Iran’s danger and satisfy the US and Israel. To him, the people of the region, the Syrian Arabs and Kurds and the Iranian population, are mere pawns on the global Imperialist chessboard.

Needed progressive solidarity with struggles inside Iran
No less cynical are those leftists and so-called socialists around the world who support the Iranian regime as “anti-imperialist,” or refuse to criticize it.

Those who limit their solidarity to calling for the removal of US sanctions refuse to recognize the complexity of the problems in Iran. They do not address the fact that the country’s problems are rooted both in the external imperialism of the US, Russia and China, and internal capitalist militarism and religious fundamentalism.

Any effort to engage in solidarity with the people of Iran begins not only with calling for the removal of US sanctions and an end to Israel’s attacks, but also simultaneously holding the Iranian regime accountable for its repression and exploitation of the peoples and environment of the region. That recognition demands calling for the immediate release of political prisoners, expressing solidarity with striking workers, feminist and environmental struggles, oppressed ethnic, sexual and religious minorities, and demanding Iran’s withdrawal from Syria and Iraq, and an end to its interventions in Afghanistan, Lebanon and Yemen.