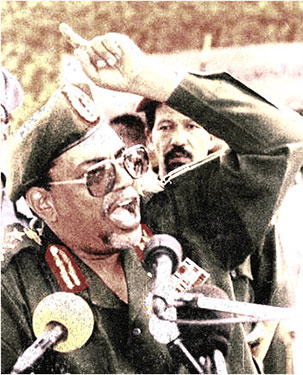 Well, this is all too telling. Seeking to legitimize his regime now that he’s reconquered most of Syria (with massive Russian military help), Bashar Assad has just welcomed the first Arab League leader to Damascus since the war began in 2011—and it is none other than President Omar Bashir of Sudan, who is wanted by the International Criminal Court for crimes against humanity and genocide in Darfur. As BashirWatch recalls, Bashir has been evading justice for 11 years. The Assad regime’s official news agency SANA said the two dictators discussed the “situations and crises faced by many Arab countries,” stressing the need to build “new principles for inter-Arab relations based on the respect of the sovereignty of countries and non-interference in internal affairs.” (Al Jazeera, Middle East Eye)

The Assad regime is itself now credibly accused of genocide, with a mass extermination of detainees amply documented, not to mention serial use of chemical weapons and massive bombardment of civilian populations. Assad and his generals may yet face war crimes charges before the ICC. (Hence the jealousy about “non-interference in internal affairs,” in case we have to spell it out for you.)

This should be a proverbial wake-up call to all those on the “anti-war” left in the West who called for ICC action against Assad “instead of” military action—as if ICC action alone would stop his campaign of extermination. We understand the obvious problems with Western military intervention in Syria (so spare us the lectures), but will these “anti-imperialists” acknowledge the problems with doing nothing and giving Assad carte blanche to commit genocide—like Bashir before him?

Anyway, with Putin-stooge Trump now ensconced in Washington and regional despots carving up the Middle East with US and Russian approval, it is largely a moot point.

Again too tellingly, prominent among these despots is Turkey’s Recep Tayyip Erdogan, who has posed as patron of the Syrian Revolution and protector of Idlib, the northern province where the rebels are making a last stand. That pose is getting harder to maintain. Turkish Foreign Minister Mevlut Cavusoglu just said Ankara would consider renewing its relations with Assad if he wins a “democratic election.” (Reuters) As if any democratic election were possible under the auspices of a hereditary dictator whose regime pledged to “burn the country” before ceding power.

Nobody should be surprised by this. Erdogan is an aspiring dictator who has been pursuing a draconian crackdown on opposition over the past two years and has himself approached a genocidal threshold in his war on the Kurds. Also not surprisingly, Erdogan has likewise been schmoozing up Omar Bashir to expand his own influence in the greater region.

The Jerusalem Post notes the growing economic and military ties between Turkey and Sudan. During Erdogan’s December 2017 visit to Khartoum, Sudan agreed to lease its Suakin Island in the Red Sea to Turkey for an indeterminate period. Turkey is to build a port, develop agriculture and restore the island’s citadel—which had been for centuries the seat of the local Ottoman governor.

Turkey’s growing footprint in the region also includes a base in Somalia. In Syria and Iraq, it has exhibited ambitions to revive Ottoman geography, with open annexationist ambitions.