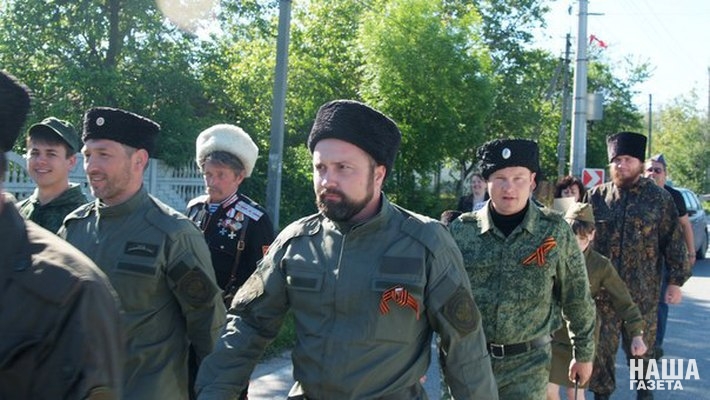 Russia’s Interior Ministry has announced that “Cossacks” will be deployed, together with the de facto police, in patrolling occupied Crimea, as well as in “carrying out anti-drug measures and educational work with young people.” So-called “Cossacks” were used, together with other paramilitaries, during the annexation of the peninsula in 2014 to carry out violence and brutality that Russia did not want attributed to official security fources, and the group Human Rights in Ukraine believes there are strong grounds for fearing that a similar role is planned again, and that “educational work” means propaganda for the Russian military.

In its Nov. 25 announcement, the Interior Ministry stated that there are already around 40 Cossack units in what they called the “regional register of people’s militia” in occupied Crimea. These, it was claimed, provide “serious assistance in averting and stopping crimes, take part in protecting public order, looking for missing people, and in circulating legal knowledge and explaining norms of behavior in public places.”

It was also acknowledged that militiamen “often” act as official witnesses during searches and arrests, “and take part in investigative measures.” The FSB and other Russian enforcement officers invariably bring their own “witnesses” when they burst into the homes of Crimean Tatars or other Ukrainians in Crimea. Since they usually prevent lawyers from being present, such “witnesses” are clearly not in any way independent.

Iryna Sedova of the Crimean Human Rights Group says that the group has recorded cases where Cossacks have been involved, first in helping the police to exert pressure on suspects, and then in falsifying evidence against Crimean activists. “Bluntly speaking, the police themselves, through these paramilitary formations, can commit illegal actions.”

Cossacks are also believed responsible for a large number of enforced disappearances in Crimea, not one of which was ever seriously investigated by the occupation authorities.

The “educational” activities Cossacks are taking part in are clearly aimed at glorifying war, the Russian military and enforcement bodies among young children. In October 2018, school children from Kerch, in eastern Crimea, were involved in a “swearing in” ceremony for cadets of the “Gryphon Cossack military-patriotic club” and a “Friends of the FSB unit.” Later that month, a monument to Cossacks who fought against Ukraine in Donbas and Crimea was unveiled in Simferopol at the newly-dubbed “Avenue of Cossack Glory.”

In October 2019, the Crimean Human Rights Group reported that Cossacks are involved in both Russia’s illegal conscription campaign in Crimea and attempts to promote the Russian army among children. These have again involved children being obliged to “swear allegiance” to a Cossack unit. All of this is in violation of international law which strictly prohibits an occupying power from carrying out conscription and engaging in any propaganda of military service on occupied territory. (Kharkiv Human Rights Protection Group, Dec. 2)