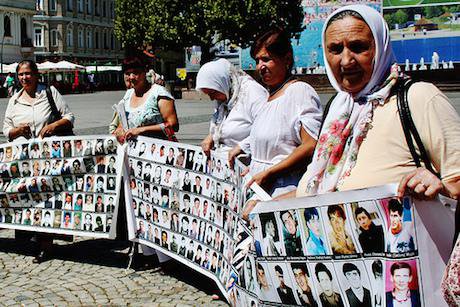 In Episode 79 of the CounterVortex podcast, Bill Weinberg marks the 26th anniversary of the Srebrenica massacre in Bosnia, and reads selections from Surviving the Peace: The Struggle for Postwar Recovery in Bosnia-Herzegovina by Peter Lippman.  In his final chapter, “Atrocity Revisionism,” Lippman deftly deconstructs the rank genocide denial we have seen from paradoxical icons of the “left” such as Noam Chomsky and Edward Herman. Presaging the similar denialism now seen concerning Syria, these “left” pundits created an impression among their gullible admirers that there was no genocide at Srebrenica—despite the fact that the remains of over 7,000 of the presumed 8,000 victims of the massacre have now been exhumed from mass graves and identified by the International Commission on Missing Persons (ICMP). Listen on SoundCloud or via Patreon.

We ask listeners to donate just $1 per weekly episode via Patreon. We now have 24 subscribers. If you appreciate our work, please become Number 25!

Photo of Srebrenica surviviors with images of the slain and missing: The Advocacy Project via OpenDemocracy