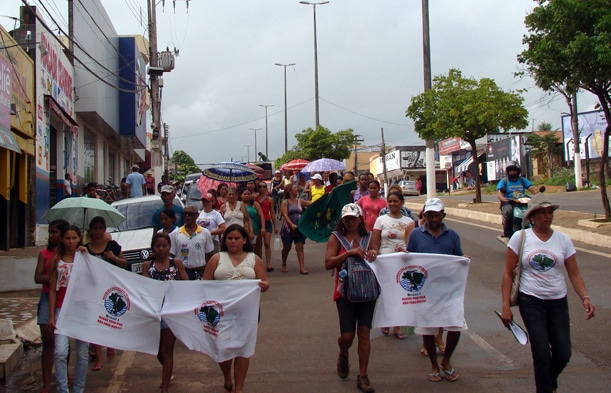 A social leader seeking restitution for local peasants displaced by a hydroelectric mega-project in the Brazilian Amazon was slain by unknown assailants in an attack on her home March 22. Dilma Ferreira Silva, 47, was a leader of the Movimento dos Atingidos por Barragens (Movement of People Affected by Dams, MAB), founded after construction of the massive Tucuruí hydro project on the Río Tocantins. Built during Brazil’s military dictatorship, the project resulted in the forced displacement of some 30,000 local residents. She was slain along with her husband, Claudionor Costa da Silva, 42, and family friend Hilton Lopes, 38, when men arrived on motorcycles at their home in the settlement of Salvador Allende, Baião municipality, Pará state. The three were overpowered, tied up, and stabbed to death. Four men have since been arrested in the case, and in a simialr assault in the area which also saw three people killed; authorities are claiming the motive was robbery in both cases.

The attack comes just as Brazil’s new arch-conservative President Jair Bolsonaro has ordered the Defense Ministry to organize “appropriate commemorations” of the start of 20-year military dictatorship in 1964. HIs spokesman Otavio Rego Barros said Bolsonaro “does not consider does not consider what happened March 31, 1964 a military coup, “He believes that society as a whole, perceiving the danger that the country was experiencing,” was able that day to unite “civilians and military, to recover and return to our country onto its course.” (KaosEnLaRed, Globo, Buenos Aires Times)