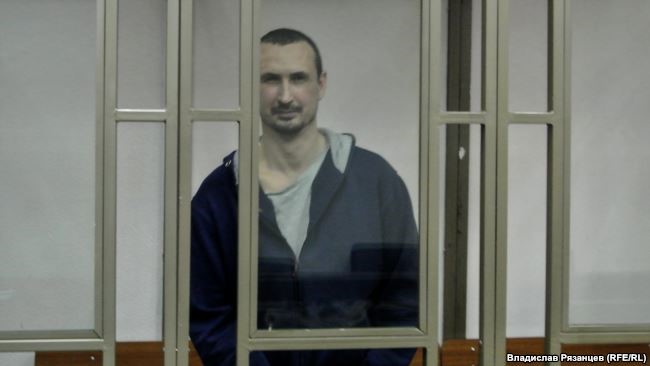 Yevhen Karakashev, a 41-year-old left-wing activist from Yevpatoria in Russian-annexed Crimea, was sentenced to six years in prison by a Russian court on April 19, with the charges based solely on years-old private messages on the social-media network VKontakte. Russia’s FSB security agency claimed that the posts fell under Article 205.2 of the Russian criminal code, which imposes penalties for “public calls to carry out terrorist activities, public justification of terrorism or propaganda of terrorism.” The sentence was three years less than that demanded by the prosecutor, and also includes limits on Karakashev’s online activities for two years after his release. Russia’s independent Memorial Human Rights Center stated that there is a strong likelihood “the criminal proceedings against Yevhen Karakashev were initiated in the context of his opposition civic and political activities as a frequent participant in protests in Crimea.” They view this as part of a mounting attack on left-wing activists and anti-fascists in Russia since January 2018.

At issue were 2014 private messages in an online chat with other Crimean anarchists which prosecutors said “contained linguistic and psychological signs of incitement to carry out violent, destructive actions (blowing up cars, buildings, state authorities).” Karakashev countered that he merely asked the other participants in the chat their thoughts on the actions of the so-called Prymorsky Partisans. This was a small band of vigilantes who, outraged at corruption of the local authorities, briefly took up arms against the security forces in a district of Russia’s Far East in 2010. One of the posts apparently included a video of an interview with the Prymorsky Partisans.

Karakashev first came to the FSB’s attention in the fall of 2016, when a group of Crimean anarchists were prevented by police from holding a picket outside the FSB office in support of imprisoned Crimean anarchist Oleksandr Kolchenko. Karakashev’s home in Yevpatoria was raided by FSB agents in February 2018. He was manhandled and suffered injuries as he was detained, but judicial authorities failed to press charges against the arresting officers. Although he plans to appeal his conviction, Karakashev has already been added to Russia’s notoriously long “List of Terrorists and Extremists“—together with Ukrainian filmmaker Oleg Sentsov, Crimean human rights activist Emir-Usein Kuku, and an ever-increasing number of other opposition figures detained in the annexed peninsula. (Human Rights in Ukraine)