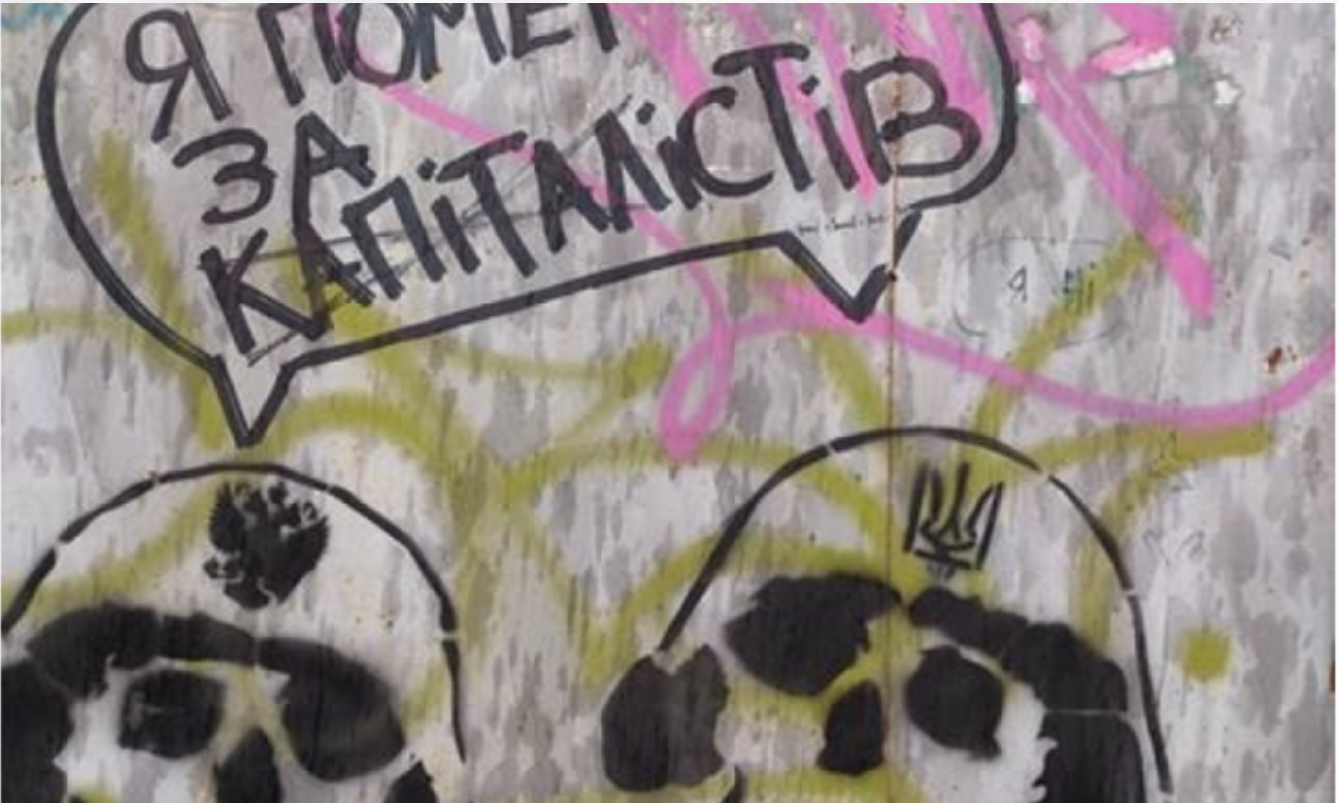 Ukraine is in the world headlines now as a frontline of confrontation between Russia and the West. Russian-backed separatists have held the country’s eastern Donbas region since 2014, after a pro-Russian government was ousted in Kiev by the so-called Maidan Revolution. Russia also unilaterally annexed Ukraine’s Crimea Peninsula in 2014. Putin is now threatening to directly invade the country if his demands are not met for a guarantee that it will not be granted NATO membership. Amid the geopolitical chess-game, few recall that during the Russian Revolution and the preceding years, Ukraine had one of the most powerful anarchist movements that the world has seen. Since the fall of the Soviet Union, anarchist groups have started to re-emerge in Ukraine, intransigently rejecting the regimes in Kiev and Moscow, and the power blocs around NATO and Russia, alike. CounterVortex communicated via email with one such group, the newly formed Assembly, which mostly functions as a media collective, reporting on labor and social struggles in Ukraine’s second city of Kharkov.

Various members of the collective responded individually to our questions.

Tell us something about your organization—your origins, activities, ideology, etc.

Olga: The media group has been active since March 30, 2020—as soon as there was a feeling in the air that this habitual status quo had finally cracked. The start of a global pandemic took us by surprise! It was unusual to stay at home all the time, it drove us into depression. At my place of work, the salary was cut by 20%, there was a fear of staff layoffs. But a couple of weeks after the start of quarantine, I found a plus in remote work. There was more time for self-education and to talk about acute social problems, and help people unite to directly help each other in the face of a crisis.

Victoria: In addition to mass panic and fear of the unknown, there was a vague hope around—if we ourselves cannot change anything in this country, perhaps at least the virus will do something… There was an understanding that if people do what they need to do, then everything will remain the same—if not, then everything will change. But these changes are to my liking…

Stan: Our online magazine soon became a place where the peaceful segment of social struggle and self-organization could meet with the militant, and began to really [live up to] its name. We cover street events, workplaces struggles, and urban development issues in our metropolis of 1.4 million. We also try to restore historical memory on the revolutionary workers’ traditions. For example, on the anniversary of the November 1917 [Russian] revolution, we published a colorful photo essay on the former Anarchy Street in Kharkov’s downtown (now it’s Darwin Street), where at that time were located the anarchist headquarters in the expropriated mansions. We recently conducted an historical investigation concerning the 1919 liberation of Kharkov by anarchists and libertarian socialists…

[Note: In early January 1919, Ukrainian nationalist forces then in control of Kharkov were ousted by a workers’ uprising organized by a Red-Black coalition; the city was taken by anarchist militias and the local Party of Left Socialist Revolutionaries. Days after this, however, the city was occupied by the Red Army of the Bolsheviks, who carried out a wave of arrests of anarchists and disarmament of their militias. The name Anarchy Street for the contemporary Darwin Street was of course dropped at this time.]

Of course, in our materials we give priority to radical methods and tactics, like as road blockades or sabotage, but also support some legal things (boycotts, pickets, educative workshops).

Yuri: Our editor [Stan] is an ancom [anarcho-communist] for over 10 years; nevertheless we don’t have any exams in ideology and theory as during admission to a Marxist party. We are ready to cooperate with different persons and initiatives, if they are not controlled by politicians or bureaucratic structures, if they support horizontal direct action from below and want to be useful to the local community, despite the threat of possible persecution.

Stan: Yes. However, the main obstacle for us is not repression. Most of all, we are constrained by the social fabric in BUR [Belarus-Ukraine-Russia]… Our society is much more amorphous and inert than in Western countries. This greatly inhibits mass activity and especially complicates the perception of anarchist ideas… In turn, this means a lack of resources for us. We are now in a situation like that of the South Russian Workers Union in 1880—one of the first proletarian organizations in the Russian Empire and the first Russian anarchist syndicate (according to the words of its co-founder Yelizaveta Kovalskaya). Their gatherings attracted hundreds of workers, who eagerly listened to every speech, but donations were so symbolic that the movement in fact existed on funds that Yelizaveta received from her mother-landlord in Kharkov to rent a flat in Kiev…

What are your perspectives on the Maidan Revolution? Did you participate? With criticisms of the leadership?

Yuri: I participated in the local Maidan, but as a right-wing militant. Our collective had not yet appeared at that time. In 2012, the anarchists in Kharkov gathered about 200 people on May Day. Then, many of them did not agree with the pro-Maidan position of others and disappeared somewhere. May Day 2014 attracted about 60 people; after that the anarchist movement actually disappeared from the political map for several years. Most of those who supported the Maidan eventually became usual liberal nationalists, giving up even anarchist self-identification.

Stan: Only state propaganda or very deluded people can call this oligarchic-parliamentary coup a “revolution.” The term “revolution of dignity” was coined by them to demonstrate their hostility to the real revolution almost a century earlier. By using this name, they say: “We are not fighting for bread or for the means of production, but simply for a rearrangement within the ruling class!” What could the enemies of any hierarchy have to do with such movement? Yes, the anarchists were strangers in this conflict; there was no one willing to create the third force…

At the same time, I will not deny that despite the obscurantism of its agenda, the victory of the Maidan objectively played some progressive role. The new regime didn’t start the anti-social reforms, but continued them, and deepened class inequality in society so much that the words “capitalism,” “neoliberalism” and “nationalism” have now become vituperative for many in Ukraine. For instance, since the opening of an agricultural land market in July 2021, our region is the absolute leader in Ukraine by the area of land sold, with an average price of only $698 per hectare. Why not glass beads, as in that legend about the Indigenous Americans? We also came out on top in debts for heating and hot water; about half of the region’s population also has debt for home gas. All this means the oncoming of a revolutionary situation, but the realization of this process by society is still lagging behind for the reasons described above. Therefore, it makes no sense to discuss whether it could have happened otherwise—we need to study today’s reality around us and to act for its change.

What are your views on the Donbas conflict and Crimea (especially the situation of the Tatars), and the current apparent Russian war preparations.

Victoria: I’m from Gorlovka—a town on the front line [within rebel-held territory]. My mum worked there in a state agency in 2014. I have not been there since the beginning of the war—I don’t know what’s going on there… There is some kind of economy—the market works, at the very least. I don’t know about production, most likely imports predominate. Russian funding and aid play an important role. I had acquaintances who were jailed in a basement by rebel forces, but I will not tell you the details. The director of the school where I studied drowned under mysterious circumstances; many simply disappeared as a result of abductions. I only know that I’m scared to go there and will not go, although I really want to. But I don’t like the Ukrainian state either—there is more benefit from one local good deed than from all the big politics.

Yuri: Crimea is now just one huge military base for Russia. The population has no rights there, all people are scared, and there will be no struggle there. Not only protest, but any activity independent of the Russian authorities is suppressed by police measures. Sometimes there are small labor conflicts, but principally it doesn’t affect anything.

Stan: The pandemic has shown that the modern capitalist order is a Colossus with feet of clay. The world has entered a period of global [power] redistribution again, and Russian war preparations are only one link in this chain. Just like in 1914, the “small victorious war” in the center of Europe, which the whole continent expected would last no more than for a few weeks, eventually led to a wave of social revolutions in the imperialist states… So now their leaders intend to divide spheres of influence peacefully, and rattle their weapons just to facilitate their negotiations. At least in the short term, no one in Kharkov perceives the threat of a big war seriously.

In general, we are mostly immersed in the life of our city… At the same time, [we recognize that] the Crimean Tatars have much stronger communitarian mutual-aid traditions than either Russians or Ukrainians. This is evidenced by the group Crimean Solidarity—a grassroots and crowd-funded human rights movement that has existed for about five years. They provide legal, media and material support to political prisoners (mainly religious dissidents) or their families. But this structure is associated with Western politicians and diplomats, their activists are partially pro-Maidan liberals, partially pro-Turkish faithful Muslims. Although they themselves are pleasant, plucky and selfless people, no liberating prospect in this movement is yet visible.

Tell me something about the ongoing local social struggles that you cover.

Stan: Only in the last weeks of 2021 there were four street labor conflicts [in Kharkov], and we know for sure that in two of them our readers were among initiators! Wildcat strikes of subway, plumbing and machine plant workers due to wage arrears were totally successful despite their partial scale. In one of Kharkov’s universities students held a lunchtime rally with fire performance trying to save their alma mater from budget cuts and possible seizing of the building for commercial purposes. This did not have an immediate result, but they plan to continue the fight!

NOTE: The Assembly collective uses the Russian rendering of place names, as that is the majority language in Kharkov. Hence Kharkov rather than Kharkiv; Kiev rather than Kyiv; and Gorlovka rather than Horlivka. The website itself is bilingual, publishing stories in both Ukrainian and Russian.

Photo: “We Both Died for Capitalists,” with the dead soldiers’ helmets showing the insignias of Russia and Ukraine, respectively.
Credit: The Commoner, UK

Assembly, a Ukrainian Anarchist Magazine, on Politics and a Possible Russo-Ukrainian War
The Commoner, UK, Jan. 27, 2022