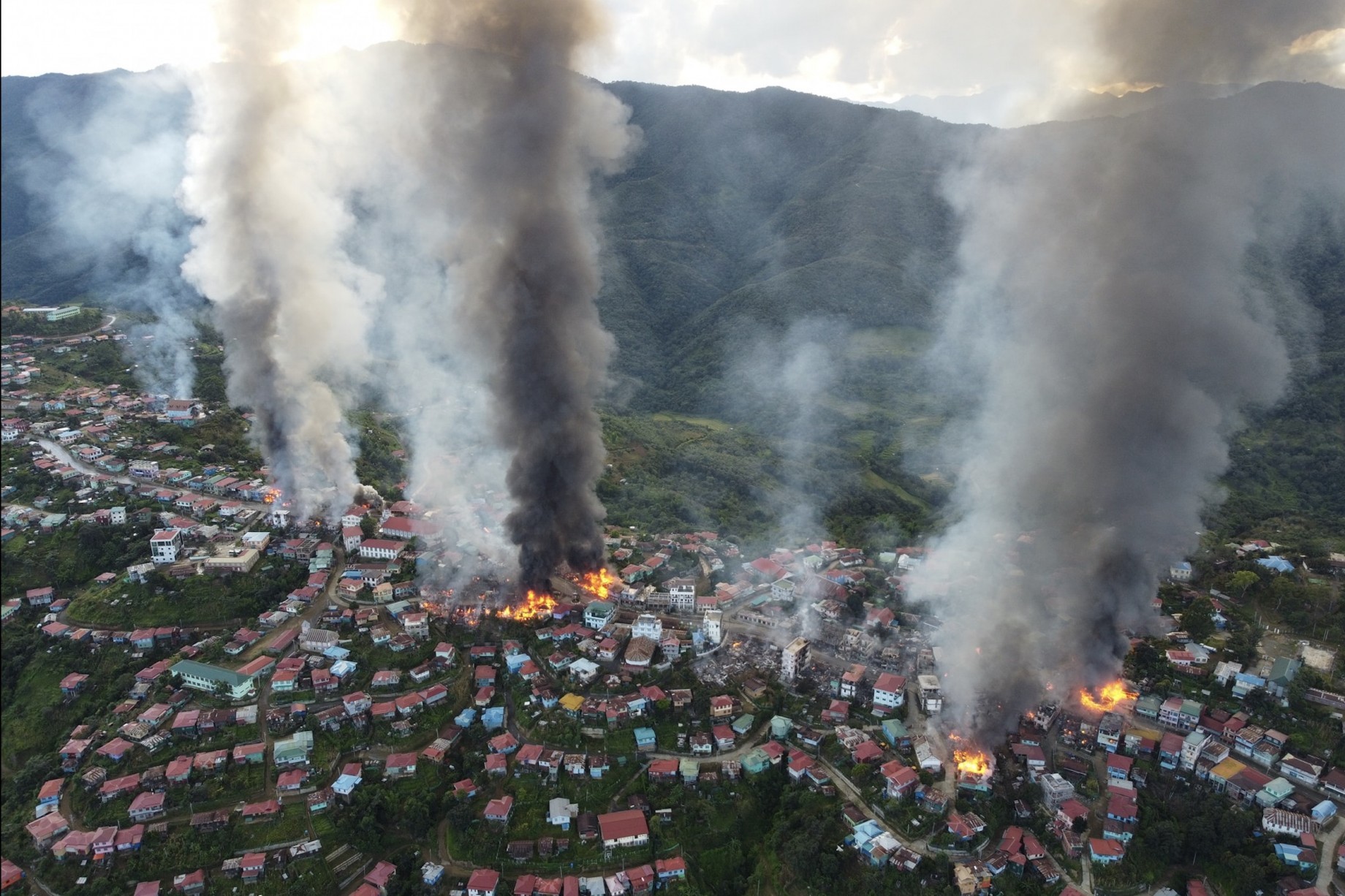 by Irwin Loy, The New Humanitarian

Volatile new conflict zones, rising hunger, and hundreds of thousands uprooted: A year into a military coup, crises are spiralling across Myanmar, but aid blockades are cutting off assistance even as humanitarian needs reach record levels.

Conditions have worsened dramatically since the military seized power in a pre-dawn coup on February 1, 2021. Existing conflicts in border areas are deepening, and new crackdowns have emptied entire towns or villages—including in areas that hadn’t seen major clashes in years.

At least 425,000 people have been newly uprooted over the last 12 months, more than doubling the number of internally displaced from before the coup. Yet humanitarian access has slowed to a trickle as the military tries to quell an armed resistance movement.

Newly formed anti-coup militias have emerged, sometimes allied with ethnic armed groups that have fought the military for decades. The military has launched air-strikes, artillery bombardments, and aid blockades that rights groups say could amount to war crimes. Maternal deaths may be rising as women give birth on the run with little access to healthcare, advocates say.

“The scenario has almost completely changed compared to a year ago,” said Salai Za Uk Ling of the Chin Human Rights Organization (CHRO). The northwest’s Chin State, along with parts of the neighbouring Sagaing and Magway regions, has seen some of the worst recent violence, with at least 180,000 people pushed from their homes in the last year, according to UN-compiled figures.

The military has severed internal supply routes and laid siege to towns, scattering residents into hiding in the jungle or forcing them to shelter in other communities. Hundreds of churches, homes, and other buildings in the northwest have been burnt to the ground—including a CHRO office in the now-empty town of Thantlang near the Indian border.

“There is an atmosphere of fear everywhere,” Salai Za Uk Ling said.

While some assistance gets through, it’s far short of what’s needed to help hundreds of thousands in increasingly dire need, they warn.

“The philosophy of denial is the same; it’s just that the scale of it has increased,” said a Myanmar-based aid worker at an international NGO who asked not to be named in order to speak freely. “There’s very little that’s seeping through—very, very little.”

The coup fallout stretches beyond the front lines to urban centers and rural communities reeling under the combined impacts of the coup, multiple COVID-19 waves, and the ensuing economic crash.

The military has killed at least 1,500 people and arrested thousands more as it tries to stamp out a nationwide civil disobedience movement, rights monitors say.

Hunger and malnutrition are rising, including in Myanmar’s agricultural heartlands. The health system teeters on collapse. Job losses have hit the equivalent of 3.1 million full-time workers, according to a recent estimate.

At least 14 million people—a quarter of the population—now need humanitarian aid, according to UN estimates. Aid plans for this year target an “unprecedented” 6.2 million of them for “urgent support”—six times more than before the coup.

The surge in needs has pushed local organizations to change how they work. CHRO, for example, is a human rights group, but its work now includes distributing food and emergency relief.

In southeast Myanmar’s Kayah, formerly known as Karenni State, the Karenni Human Rights Group has also taken on humanitarian relief by necessity: More than a third of the Karenni population has been forced to flee since mid-2021, said the group’s director, Ko Banya.

Half the population of the state capital, Loikaw, has fled; and its second-largest city, Demoso, is all but empty, according to Ko Banya. “We have had huge numbers that we could not quite handle, honestly,” he said.

Kayah has seen heavy fighting for the first time in years. The UN estimates at least 140,000 have fled their homes there; Ko Banya put the number at 170,000 and rising.

On December 24, the military killed at least 35 people, including two aid workers, and burnt their bodies, according to rights groups and aid workers. Save the Children says two of its staff were among the dead.

“The military can bomb everywhere by air-strike. Or they can use mortars and fire everywhere,” Ko Banya said. “The people are really suffering.”

Conflict has flared for decades in Karen State, also along Myanmar’s eastern border, but now “the fighting area is wider and wider,” said Saw Htoo Klei, director of the Karen Office of Relief and Development, or KORD.

Civilians are coming under direct assault, when they used to be able to at least negotiate with soldiers in some circumstances, he said.

“It is a very dangerous situation,” Saw Htoo Klei said. “[The soldiers] don’t listen to the people. They just attack or they bomb, or they shoot at the villages.”

Blockades cut off food and supplies
The military has shrunk humanitarian access across the country’s conflict zones, imposing blockades on supplies or simply denying travel permissions.

“Many of the people were not able to return to their paddy fields,” Saw Htoo Klei said. “When one crop is destroyed, that means they lost the food for the whole year.”

Thailand-based KORD distributes cash aid cross-border when it has funding, he said, but the military checkpoints make it harder for people to travel to and from market towns within Myanmar.

Many displaced people “fled deeper into the jungle where there are no doctors and not enough medicine, even before the coup,” he said. “At the moment, we cannot buy new medicine at all.”

Elsewhere, people are more cautious of transporting large amounts of aid, fearing arrest at the ubiquitous military checkpoints, said the aid worker at the international NGO.

In Chin and the northwest, the movement of goods has stopped “almost completely,” said Salai Za Uk Ling, of CHRO.

“With no new supplies or replenishing of food stock for several months now, the people are facing extreme food shortages,” he added.

Red tape and aid delays
Given that the military frequently blocks access within the country, Myanmar civil society groups have pushed donors to step up funding for cross-border aid.

Salai Za Uk Ling said donors and international agencies he has spoken to are more supportive than they were months ago—realizing that in some cases, it’s the only way to reach trapped communities.

“There is a trickle of help now making its way,” he said.

In Kayah, several international NGOs and UN agencies have suspended operations around Loikaw and elsewhere since the December violence.

This places even more emphasis on the local groups that remain and are relied upon to implement humanitarian aid deliveries.

In one case, he said, supplies promised after fighting flared in May weren’t sent until December.

“If they deliver one small item, they need to go with their own staff, they have to sign several papers,” he said. “They require so much information and data.”

Other aid workers who spoke to The New Humanitarian worry Myanmar is slipping from the aid agenda, amid a long list of crises and record humanitarian needs around the globe. “Myanmar is definitely a tier-two country on the world stage right now,” said the aid worker at the international NGO.

Saw Htoo Klei of KORD said his group is waiting for donor funding for 2022 to kick in before restarting relief missions, though he expects this to happen soon.

As violence ebbs and flows across Myanmar, however, he worries that international support is only available when fighting is at its worst.

He recalls receiving offers of support after large clashes that pushed people briefly into Thailand last year. But the conflict in Karen State has lasted decades.

“When there is normal fighting—not big fighting—it is like they think that the situation is fine,” Saw Htoo Klei said. “But in reality, people have to flee every day.”

This story first appeared Feb. 1 in The New Humanitarian.

Photo: Smoke rises from the town of Thantlang after it was bombarded by junta artillery shells on October 29, 2021. Credit: The Chinland Post via Myanmar Now