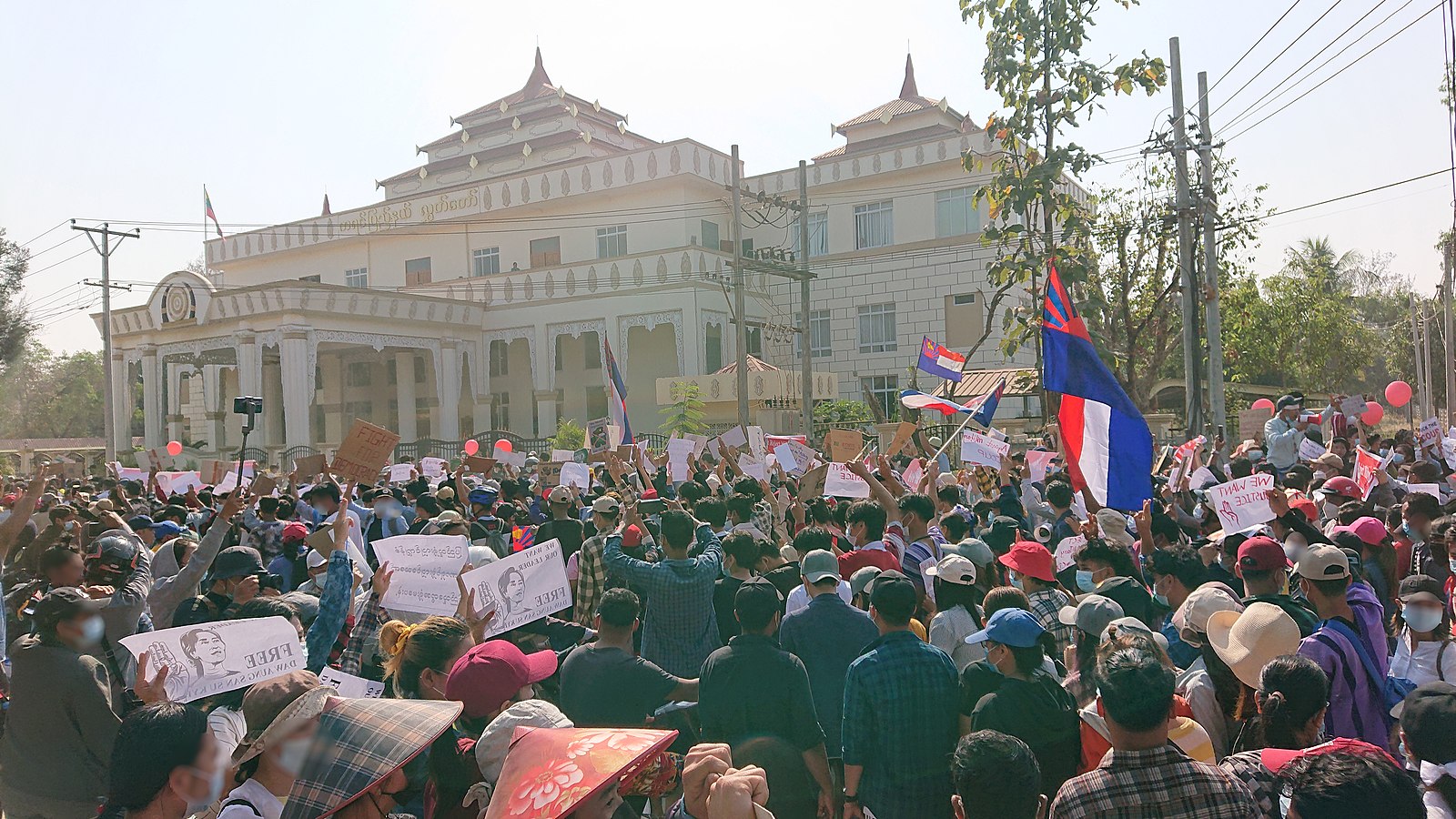 Burma is once again in the international headlines as the Southeast Asian nation has lost another opportunity to sustain its credibility as a multi-party democracy. A one-year state of emergency and period of military rule were announced in the early hours of February 1,  when the generals again seized power. Many of the newly elected lawmakers were detained just hours before Parliament was to convene its fresh session.

But over a hundred thousand Burmese citizens have taken to the streets across the country in the days since then, demanding restoration of democratic rule and release of all detained political leaders—including pro-democracy icon Aung San Suu Kyi, known to her followers by the honorific Daw, or aunt. The spontaneous demonstrations across Burma bring back memories of the 2007 Saffron Revolution, led by Buddhist monks, which paved the way for the democratic transition four years later.

Veneer of constitutionality
The disturbing news of the coup d’etat broke from Naypyidaw, Burma’s new capital, hours before the Pyithu Hluttaw, the lower house of Parliament, was to open its new session. The upper house, or Amyotha Hluttaw, was scheduled to convene next morning in the Naypyidaw capital complex. The Tatmadaw, as Burma’s military is known, announced that the sessions were suspended.

In a veneer of legality, the military-run Myawaddy television channel initially announced that upon the declaration of emergency an interim government was installed, headed by U Myint Swe—a retired army general, and the army-appointed vice president. But immediately upon becoming acting president, Myint Swe promptly handed all legislative, executive and judicial powers to the military commander-in-chief, Gen. Min Aung Hlaing.

Immediately detained and placed under house arrest were ousted president U Win Myint along with National League for Democracy (NLD) chief Suu Kyi, who served the country as State Counsellor, and many state government chiefs. A large number of pro-democracy activists and human rights workers were also arrested in different parts of the country.

The telephone lines, mobile services, and internet connections in different parts of the country were temporarily restricted. The civilian-run state broadcaster MRTV went off the air. Military personnel with armored vehicles were deployed in cities including Naypyidaw, former capital Yangon (Rangoon), and ancient capital Mandalay.

Military claims voter fraud —baselessly
The conflict started with the outcome of multi-party general elections, held on November 8, 2020, in which the NLD candidates achieved huge success. The military-backed Union Solidarity & Development Party (USDP), meanwhile, suffered losses—winning only 33 out of 476 available constituencies. Even while enjoying an inherent advantage under terms of the 2008 Constitution—with 25 percent of  seats in both the houses of Parliament reserved for military officers—the USDP found the outcome  humiliating.

The NLD, led by 1991 Nobel peace laureate Suu Kyi, won in 396 seats in both houses of Parliament, which is far ahead of 322, the magic number to form the government in Naypyidaw. Suu Kyi had also seen a landslide win in the last general elections of 2015, which she contested just five years after her release from years of house arrest by the military junta (then led by Gen. Than Shwe). Between 1989 and 2010, Suu Kyi spent a total of 15 years under house arrest.

But this time the military authority (through the USDP) made accusations of widespread voter fraud by the NLD-led civil authorities—although without any evidence. The country’s election commission had ruled out any irregularity in the race. Domestic election observers also stated that the polls were credible. In January, the USDP brought a challenge of the results before Burma’s Supreme Court—although the body had not ruled by the time of the February coup d’etat.

Burma’s top military general Hlaing, who nurtures an ambition to become the president, also asserted that the constitutional guidelines could be modified under the urgent need of internal security and safeguarding the country’s territorial integrity. Another military officer, Zaw Min Tun, who functions as the Tatmadaw’s spokesperson, asserted that the military would impose laws in accordance with the situation.

Cycles of repression and resistance
Since independence from the British in 1948, Burma has experienced military coups in 1962 and 1988—the latter ushing in the long period of army rule that Suu Kyi’s pro-democracy movement opposed. But this time it may not be so easy for the Tatmadaw to consolidate its rule. The United Nations, United States of America, United Kingdom, European Union, Canada, Australia and Singapore have all called for the prompt restoration of democracy. The US, under the new administration of Joseph Biden, has moved to impose limited economic sanctions. India has also expressed concern over the military actions in its bordering nation.

Suu Kyi has lost her once-sterling image in the international arena following the exodus of some 700,000 Rohingya Muslims from Burma in recent years, fleeing brutal military campaigns in Rakhine state—which she allegedly did not resist according to her capacity. However, she continues to be a revered leader in the Land of Golden Pagodas. Constitutionally barred from becoming the president (ostensibly because she is married a foreigner), Suu Kyi has been the de facto civilian ruler of Burma since the elections of 2015. Now, her open call to the Burmese people, irrespective of their ethnicity or social class, to resist the military power-grab has been answered with a campaign of non-violent protest and civil disobedience.

International human rights groups, and organizations that formed around the world to support Burma’s pro-democracy struggle a generation ago, are also raising voices against the new military regime. New York-based Human Rights Watch observed that Burma’s military has a long legacy of harsh repression, and is calling for pressure on the regime not to unleash such measures on the protesters this time. HRW also assailed Hlaing for his active role in the cleansing of hundreds of thousands Rohingya Muslims from Rakhine state into bordering Bangladesh.

Facing the heat, Hlaing has pledged free and fair multi-party general elections after the emergency period is completed. He also went on television to assure that he is planning to ease the pandemic restrictions across Burma—a source of popular discontent. Appeasing international opinion, he promised that Rohingya refugees in Bangladesh would continue to be repatriated to Rakhine state as already designed—although it must be noted that many Rohingya do not wish to return to Rakhine under current conditions, and have protested plans for their repatriation.

The coming weeks and even days will be critical in determining whether Burma will be facing another dark period of military rule—or if the new democratic uprising in the country will meet with effective international solidarity.

Nava Thakuria is an independent journalist based in northeast India.