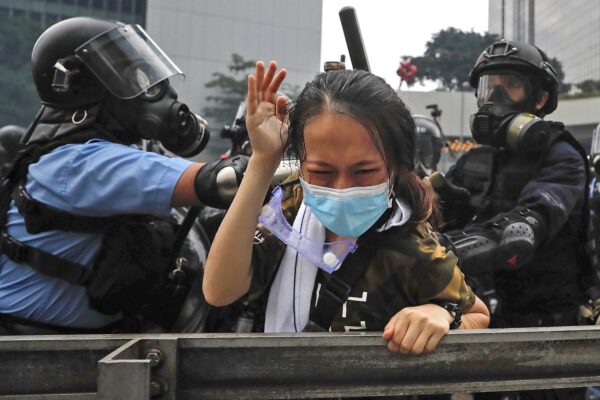 Protesters are rejecting what they call Hong Kong Chief Executive Carrie Lam’s “fake concession,” with the demonstrations now in their fourteenth straight week. Contrary to widespread media reports, Lam’s supposed  “withdrawal” of the extradition bill is actually only a promise to withdraw it when the Legislative Council reconvenes next month—with no date yet set. Lam refused the other four demands of the current unprecedented mass movement: repudatiation of the term “riots” for the protests (with “riot” charges carrying a 10-year prison term); an independent investigation into police brutality during the demonstrations; release of all detained protesters, and the dropping of all charges; and “universal suffrage” in elections of the chief executive and Legislative Council.  (Nikkei Asian Review, The Villager)

ChinaWorker.info, a Hong Kong-based website that supports independent labor struggles in China and is now supporting the protest movement in the city, warned of a replay of events in Wukan, a village in Guangdong province that saw a local uprising in 2011, only to be outmaneuvered in the end by the regime:

Fake concessions accompanied by repression are a trick the Chinese dictatorship (CCP) has always used. In the Wukan struggle in Guangdong province in 2011, the villagers who struggled against police brutality, land theft, and for the democratic election of village officials, mistakenly believed the CCP’s promise about allowing elections and so called off their struggle. Eventually the CCP-state took grim revenge with the breaking of all promises, mass arrests, and a fierce crackdown.

What the CCP most fears is showing weakness towards Hong Kong protesters, which will damage the dictatorship’s authority and in turn inspire the mainland masses to rise up and fight, following the example of Hong Kong masses. In that case, Hong Kong’s revolution can be spread throughout China in a chain reaction. Therefore, after Lam’s withdrawal of the bill, the CCP intends to launch violent repression in Hong Kong in order to prevent the potential spread of the movement to mainland China.

Many of the protesters, however, are not looking to fellow protesters in mainland China as allies, but to Western imperialism. The US media (NBC, CNN, NYT) are jumping all over an incident today in which thousands of protesters waving US flags marched on Hong Kong’s US Consulate to call for help from the White House. Some sang the “Star-Spangled Banner” and carried a large banner reading “PRESIDENT TRUMP, PLEASE LIBERATE HONG KONG.”

This is extremely maddening news. Surely these protesters are aware of Trump’s open glorification of police repression of protesters. Apart from displaying incredible naivete about US intentions, such stunts play right into Beijing’s propaganda that the Hong Kong protests are all fomented by Western imperialism. We certainly hope such incidents are receiving disproportionate hype in the Western media (and recall that up to a million have participated in the Hong Kong protests, so even a protest of several thousand is not necessarily representative of the whole movement). We’d like to hear less from the Hong Kong protesters appealing to Trump and more about solidarity (for instance) with the protests that broke out in Wuhan, in central China, in the midst of the Hong Kong uprising.

That kind of solidarity is what could really threaten the China’s party-state dictatorship. Rallying around Trump doesn’t threaten it at all. It strengthens it.