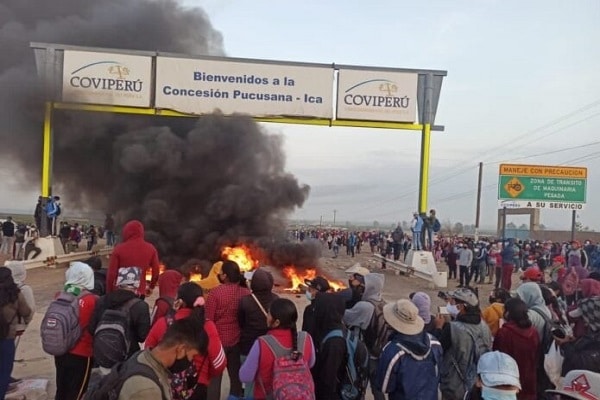 Hundreds of striking farmworkers are blocking the Panamerican highway through southern Peru, demanding revocation of a decree extending an anti-labor agricultural reform law that was supposed to sunset this year. The protests, launched Nov. 30, have prompted the central government to send a dialogue team from Lima to Ica region, but the farmworkers have refused dismantle the roadblocks, insisting on a face-to-face meeting with Agriculture Minister Federico Tenorio. At issue is Law No. 27360, or the Law for Agrarian Promotion—dubbed the Chlimper Law for its author, José Chlimper, who served as agriculture minister under the authoritarian regime of Alberto Fujimori in the 1990s.

The workers assert that the minimum daily wage of 39.19 soles (about $11) stipulated under the law is insufficient to live on, and doesn’t take into account that employees in the agribusiness sector typically work 12 hours a day or more. The law also allows employers to deduct from wages payment for “services” provided to workers who live on their plantations. Farmworkers in the southern coastal zone, which is the heartland of plantation agriculture in Peru, have long been demanding its abrogation. However, under a decree signed last year by then-president Martín Vizcarra, the law is extended in force through 2031.

Employers in the region have reacted harshly to the protests. Benjamin Cilloniz, general manager of SAFCO Peru, a major Ica agribusiness interest, stirred controversy when he told a reporter that the protests “appear similar to what we lived through with terrorism”—an obvious reference to the Shining Path guerillas. (RPP Noticias, El Comercio, El Comercio, Expreso, TeleSur, Gestión, Trome)