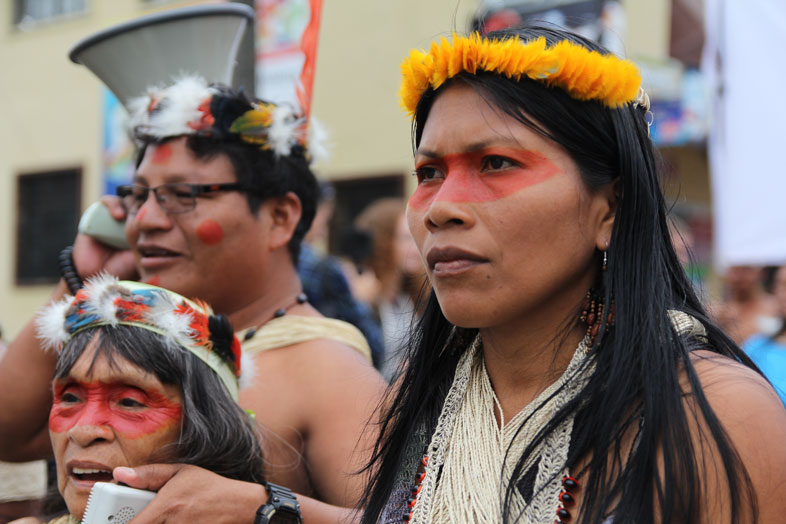 The Waorani indigenous people of the Ecuadoran Amazon won a legal victory hailed as historic April 26, as the provincial court of Pastaza Pilar Araujo blocked the opening of their traditional territories to oil exploitation. The case was brought last month by 16 Waorani communities, who charged that their right to “free, prior and informed consent,” guaranteed by both Ecuador’s constitution and international law, was violated when the government divided much of the province into oil exploitation blocs. One, Bloc 22, overlaps almost entirely with Waorani territory. The communities charges that technicians from the Ministry of Energy & Non-renewable Resources sent to the communities to conduct a prior consultation on the oil bloc instead attempted to bribe them with “gifts” of food and promises of education and other aid, wthout making clear that the offers were in exchange for opening the territory to oil companies. The ruling suspends auctions for Bloc 22 while the case is on appeal.

“Today, the courts recognize that the Waorani people, and all indigenous peoples, have rights over our territories that must be respected,” said Nemonte Nenquimo, one of the plaintiffs and leader of the Coordinating Council of the Waorani Nationality of Ecuador-Pastaza (CONCONAWEP). “The government’s interests in oil is not more valuable than our rights, our forests, our lives.”  (El Universo, Guayaquil, Al Jazeera, Mongabay)