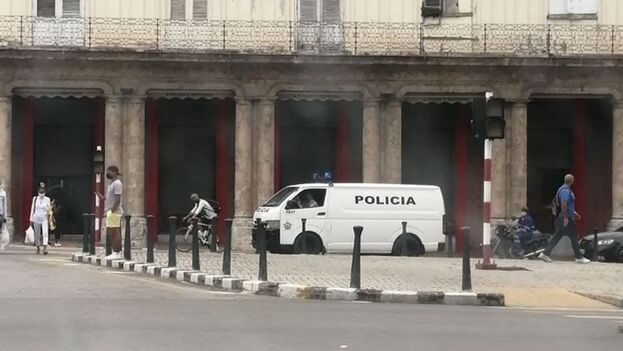 Plainclothes State Security agents began to gather in downtown Havana early on Nov. 15, the day a “Civic March” had been called by opposition networks. In addition to heavy deployment in the parks and squares, armed agents were stationed on the rooftops around the iconic Capitolio building. What the opposition website 14ymedio called pro-regime “vigilante groups” also gathered on street corners. According to the Havana-based independent human rights organization CubaLex, police arrested 11 people, while some 50 identified as key organizers were effectively “besieged” inside their homes to forestall any public gathering. Those arrested had apparently attempted to gather in defiance of the pre-emptive security measures. Some went out into the streets dressed in white, the color that organizers of the call had promoted. A small group of young people were detained on the Paseo del Prado while shouting “Patria y Libertad“, slogan of the protest wave that shook Cuba in July.

Foreign Minister Bruno Rodríguez described the protest call as a “failed operation” in a speech live-streamed from the streets of Havana on Facebook. Displaying social-media savvy, he emphasized the #CubaVive hashtag used by the regime to indicate that the Island is living under “normal tranquility.” The slogan has also been used on posters displayed by the pro-regime Rapid Response Brigades in rallies against the opposition network that issued the protest call, known as Archipiélago.

Launched by arist and playwright Yunior García Aguilera, Archipiélago claims followers in every region of Cuba. Based in the Havana district of La Coronela, García Aguilera seems very distinct from the Cuban opposition leaders based in Miami. He worked for years in state-run theater and TV productions, is critical of the US embargo on the island, and says he considers himself more liberal than Cuba’s “conservative” leadership. He has been effectively confined to his home by security forces since the morning of Nov. 15.

In a sign of significant cracks in the pro-regime consensus, the legendary singer-songwriter Pablo Milanés on the morning of Nov. 15 posted to Facebook a message in support of García Aguilera and “all the Cubans he represents, who are struggling within and outside of Cuba.” (Havana Times, Havana Times, CNN, CNN, El País, Uruguay)