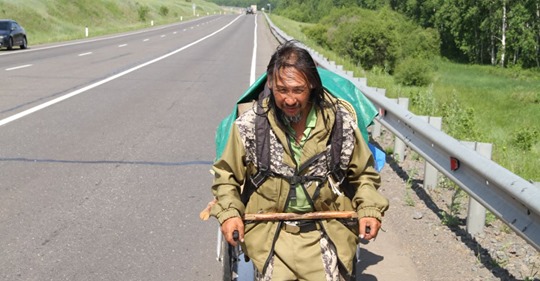 A traditional shaman of Siberia’s indigenous Yakut people, who had been walking cross-country for months toward Moscow “to drive [Russian President Vladimir] Putin out of the Kremlin,” was arrested in Russia’s far eastern republic of Buryatia. The region’s Interior Ministry said Sept. 19 that Aleksandr Gabyshev was detained overnight on a highway near Lake Baikal. “Gabyshev is wanted in Yakutia on suspicion of committing a crime,” the ministry said without specifying what crime the shaman is suspected of having committed. It added that he will be transferred to his native Yakutia.

Gabyshev’s supporters told RFE/RL that several vehicles arrived overnight at a camp they had set up near the town of Vydrino in Buryatia, and took away the shaman and the cart he used to push his belongings. “The highway was blocked by special service units, they quickly surrounded our camp and directly went to the shaman’s tent. There were probably several dozen people,” one supporter said. The uniformed men did not identify themselves, and gave no reason for Gabyshev’s arrest.

Gabyshev started his walk to Moscow four months ago, saying he considers Putin “a creation of dark forces,” and that only a shaman can stand against him. He covered 2,000 kilometers on foot and talked with hundreds of truck drivers and local residents along the way, gaining notoriety on social media.

“The shaman’s actions may be eccentric, but the Russian authorities’ response is grotesque. Are they truly afraid of his magical powers? Aleksandr Gabyshev should be free to express his political views and exercise his religion just like anyone else,” said Amnesty International’s Russia director Natalia Zviagina.

Earlier in September, when Gabyshev reached Buryatia, local shamans from the religious organization Tengeri tried to stop him, saying that he would not be considered a shaman if he continued to walk to Moscow. Gabyshev did not enter Buryatia’s capital, Ulan-Ude, but continued his walk, even as police detained several of his supporters in the city.

On Sept. 9, three-day rallies began in Ulan-Ude at which protesters demanded the release of Gabyshev’s supporters and challenged the results of local elections, complaining that they were rigged.

In July, upon reaching the city of Chita (Zabaykalsky Krai), Gabyshev gathered some 700 people under the slogan “Russia without Putin!” The shaman said that “God told me Putin is not a human, but instead a demon and has ordered me to drive him out.”

A Putin spokesman said on the Kremlin was not aware of Gabyshev’s detainment. (Radio Free Europe/Radio Liberty, Sept. 19)