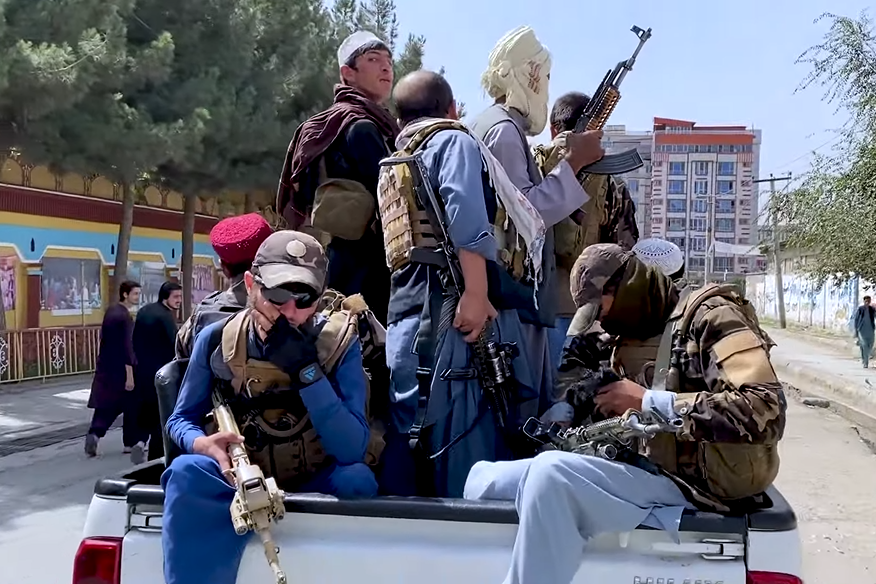 The international community and the United States spent billions of dollars on rebuilding the Afghan legal and judicial system and improving the rule of law and governance over the past two decades. However, after the Taliban takeover, any such progress quickly disappeared and the foundations for the Afghan legal system that had been expensively rebuilt over the last 20 years are in state of collapse, approaching the state of lawlessness that existed prior to 2001. It is the responsibility of the United Nations and the countries engaging with the Taliban to make rescuing the legal system and ensuring rule of law their top priority when they negotiate with the regime.

Efforts to Rebuild the Legal and Judicial System
After the Taliban 1.0 fell in 2001, a new constitution which embedded both Islamic and modern-progressive values was adopted in Afghanistan in 2004. Although the constitution suffered from many institutional flaws, including a weak system of checks and balances, it envisaged a democratic system and guaranteed fundamental liberties and equal rights for both men and women. Laws and legal procedures in conformity with international norms and the modern world were enacted with the help of international and national legal scholars and practitioners. Many programs were designed and implemented to modernize the legal system, promote institutional reforms, and build capacity. Thousands of young, educated women and men entered the legal and judicial systems as judges, prosecutors, attorneys, clerks, and administrators. Most of them received extensive academic legal education and gained invaluable experience, visiting foreign countries and learning from different legal systems. While the system was still grappling with major deficiencies and challenges including rampant corruption and poor implementation, there was still hope for reforms and improvements and the prospect of a better future.

Taliban Disregard of Laws, Legal Procedures, and the Rule of Law
Although the Taliban have not officially and directly rescinded (or endorsed) any laws from the previous government, their actions demonstrate that they have no regard for the laws and regulations that were enacted in the past 20 years. They have consistently emphasized that they govern in accordance with Sharia, without providing specific details or a definition of what they mean. For instance, long before retaking Kabul, they proclaimed the 2004 Constitution against Sharia despite the fact that the charter established Islam as the state religion and the supreme source of law in the country. (Article 3 of the constitution states that “no law shall contravene the tenets and provisions of the holy religion of Islam in Afghanistan.”). On one occasion, on Sept. 28, 2021, the Taliban indicated that they might temporarily implement King Zahir Shah’s Constitution, adopted in 1964. However, other than that one mention, the Taliban have not discussed any constitution or constitutional order.

Additionally, the fate of a huge number of statutes and regulations in areas including criminal law, family law, and women’s rights is unclear. It can be concluded from the Taliban’s statements that they ignore the laws in most areas but selectively point to provisions of some laws when it serves their interests. Moreover, the random and often ambiguous orders of their supreme leader are considered the law of the land. One of the recent orders of the Taliban leadership addressed some issues related to family law including the marriage right of women based on Sharia.

The Taliban have also claimed that they respect international law and treaties as long as they do not violate Sharia law and their Islamic Emirate’s principles. However, in practice, there is no indication that they intend to comply with any international treaties to which Afghanistan is a state party.

Disbanding Independent Institutions
The Taliban have dissolved the Afghanistan Independent Bar Association, one of the main arms of justice in the country. They have required about 6,000 bar members (approximately 25% women) to take and pass a new entry exam conducted under the auspices of the Ministry of Justice. The Taliban also prevented a gathering of attorneys who were protesting the dissolution of the bar in December. In addition to losing their independence under other Taliban decrees, women lawyers are not able to practice law again under the Taliban regime.

Additionally, the Taliban have disbanded the Afghanistan Independent Human Rights Commission (AIHRC). The AIHRC was established on June 6, 2002 based on the Bonn Agreement and international human rights instruments. Under the Islamic Republic, it maintained a critical role in monitoring, investigating, documenting, and reporting human rights violations and advocating for rights-based policy changes in Afghanistan.

Taliban Militants Taking over Justice Institutions with Limited Knowledge of Law
Taliban leaders accused of severe violations of human rights and included in the UN terrorism sanction list are taking on the Afghan justice institutions, including the Supreme Court, the Ministry of Interior, and the Attorney General’s Office. For instance, both the current Taliban Minister of Interior and the new Attorney General are on the UN terrorism sanction list. The Taliban have systematically replaced the employees of the previous government’s justice institutions with their fighters, who have no substantial education or background in law or even Sharia. One of the Taliban leaders, the current Minister of Defense, declared that Taliban members should be hired in government despite their educational merits.

The Taliban have dismissed judges—approximately 2,000 of them altogether. Not only have they dismissed the judges, but they have also chased down and persecuted many, particularly women judges. Over two hundred women judges have been forced to hide or flee after the Taliban takeover. Many were evacuated to foreign countries by women’s rights organizations and international aid agencies. These women had gained extensive experience and knowledge in law and received judicial credentials over many years. The Taliban replaced these educated and experienced judges with fighters lacking any judicial qualification. These women judges will not be able to sit on the judicial bench again so long as the Taliban remain in power. The Taliban have taken a similar approach to prosecutors and other staff at the Attorney General’s Office.

The Taliban’s Arbitrary Actions and Human Rights Abuses
Given that they do not rule by law and legal procedures, it is unsurprising that human rights abuses have significantly increased since the Taliban took control of Afghanistan. Journalists, human rights activists, women’s rights advocates, members of former security forces, and former government employees have been arbitrarily arrested, tortured, or disappeared. Many reports indicate that the Taliban have opened fire on and murdered innocent people who have driven by their checkpoints, even after having passed the check. This was apparently the case when the Taliban killed a woman and injured two others on Feb. 19 in Kandahar province.

Furthermore, there have been many photos and videos circulating on social media showing Taliban fighters parading suspected or accused individuals on the streets with tied hands and black-colored faces. There is no way to understand whether those individuals may in fact be guilty, or if the Taliban have just taken some innocent people and humiliated them in public so they could instill fear for the purpose of control, or to deter real criminals. Furthermore, many reports indicate that the Taliban randomly stop cars or people and search their cellphones in Kabul. Similarly, as a latest move, the Taliban have started a massive house-to-house search in Kabul, Parwan, and Panjshir provinces. According to reports, the Taliban militants have targeted specific ethnic groups, breaking into their houses without any court warrant and harassing the residents.

It is unclear how the Taliban would investigate violations of human rights, as they claim they will. Apparently, the Taliban govern by their soldiers’ whims, without any restraints. If anyone has any grievances, they would go to the nearest commander or governor, who would consider the case on the spot without conducting the thorough investigation that would have been conducted previously by a prosecutor and then considered by a judge. A recent special report from Sky News reveals that the Taliban have kept many people, including children, in a prison in Herat with “no proof, no evidence and no trials.” For the Taliban, this prison was thought to be well-kept and organized so they allowed a visit by international media. By comparison, the situation in other Taliban prisons must be much worse.

Responsibility of the International Community to the Afghan Legal System
Although the UN, the United States, and many European countries are currently focusing on responding to the humanitarian crisis and the looming hunger and extreme poverty in the country, they should not forget that they have a responsibility to ensure rule of law and preserve the achievements of the last two decades. They should hold the Taliban accountable for any human rights abuses and arbitrary actions. The UN, US, and other countries that have engaged with the Taliban have a responsibility to pressure the regime to end arbitrary actions, restore the justice system, and refrain from installing their fighters in positions requiring technical skills, advanced education, and specific expertise. While the UN and international community are pushing for the establishment of an inclusive government in the country, they have the leverage and opportunity to demand that the Taliban ensure the rule of law and employ appropriate legal procedures in all their actions. Without restoring the legal and judicial system, rule of law in Afghanistan will be eviscerated.

Conclusion
The Afghan legal and judicial system is collapsing rapidly. The Taliban have created a legal vacuum. They put the laws on hold, dissolved the independent legal institutions, and replaced the human capital in justice institutions with uneducated militants, without considering the legal or judicial qualifications. Given the present situation, it is expected that human rights violations will only continue to increase dramatically. It is urgently important for the UN and other major international and regional players to place restoring the legal system and the rule of law as their top priority whenever they engage with the Taliban. With the current Taliban disregard for laws and legal procedures and the loss of human capital in the justice institutions, it might soon be too late for the Taliban or any “inclusive government” they establish to restore the legal system and ensure justice and rule of law in the country.

Mahir Hazim is a visiting associate research professor at Arizona State University Sandra Day O’Connor College of Law in Phoenix. He is an Afghan academic and legal practitioner with an interdisciplinary background in law, social-legal studies, and political science. He holds a Ph.D. (2020) and LLM (2016) from the University of Washington in Seattle.

AFGHAN WOMEN WHO ARE SPEAKING OUT
by Robyn Huang, The New Humanitarian
CounterVortex, August 2021