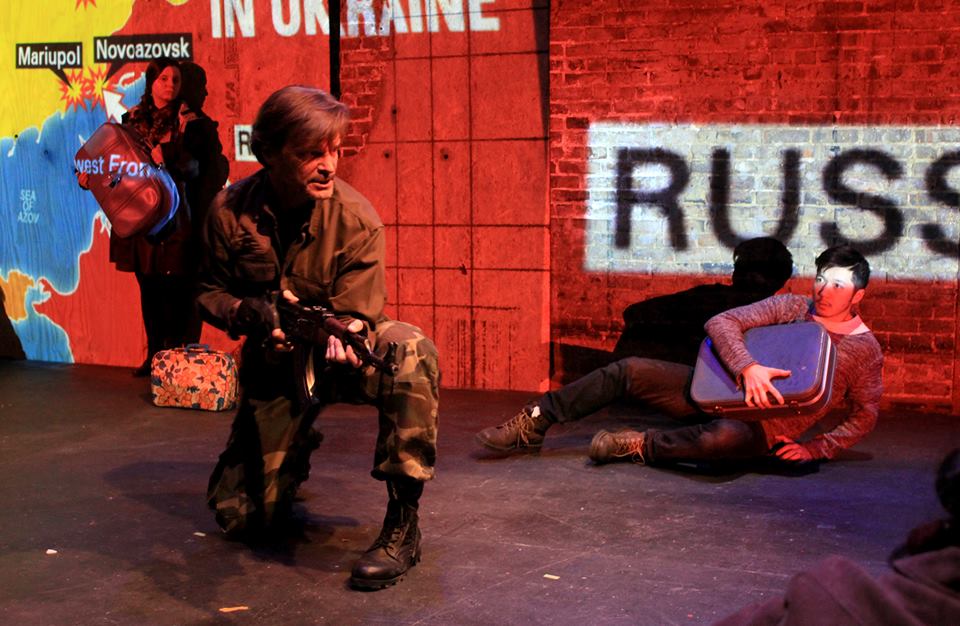 A scene from Yara Arts Group's "Hitting Bedrock," on the war in eastern Ukraine, performed at La Mama theater in Lower Manhattan. East Village Ukrainians take pride in the neighborhood's role in keeping their culture alive through the worst years of… Read moreWar in Ukraine: the view from the East Village

The View from the East Village

As I write, Russian tanks are amassing on the line that separates those areas of Ukraine controlled by the Kiev government from the Crimean Peninsula, now unilaterally annexed by Moscow. Kiev has placed its armed forces on high alert, and there are fears of full-scale war.

In addition to the Crimea stand-off, for two years Ukraine has faced a Russian-backed separatist revolt in the eastern enclaves of Donetsk and Luhansk. Despite official denials, Russia is widely thought to have troops there, backing the separatists.

All this was set off by the 2014 Maidan revolution—named after Kiev’s central square, which was occupied by protesters over the bitter winter of 2013-4, to demand the ouster of President Viktor Yanukovich. Just as Britain recently voted to flee the European Union, Ukrainians were seeking closer ties to it. For the Maidan protesters, the EU represented guarantees for human rights and transparency in a country dominated by corrupt oligarchs.

Yanukovich represented the epitome of this kind of political animal, and set off the Maidan movement by rejecting a treaty for preliminary ties with the EU in favor of one for closer integration with Russia. He was finally removed by a vote of parliament in February 2014. By then, some 200 had been killed in repression, and some on the side of the protesters had started to arm. New elections were held in May, bringing the more Euro-friendly Petro Poroshenko to power. But separatists seized the east, and Russia annexed Crimea.

Even if you don’t follow international news, it was hard to be unaware of all this if you live in the East Village. From the early days of the Maidan movement, a wall on the east side of Second Ave. between St. Marks Place and 9th Street displayed news clips from Kiev and messages of support for the protesters—adorned with the blue-and-gold colors of Ukraine and the trident that is the symbol of the nation.

The UN High Commissioner for Human Rights urged Macedonia to end its pattern of expelling and detaining migrants in defiance of international standards.