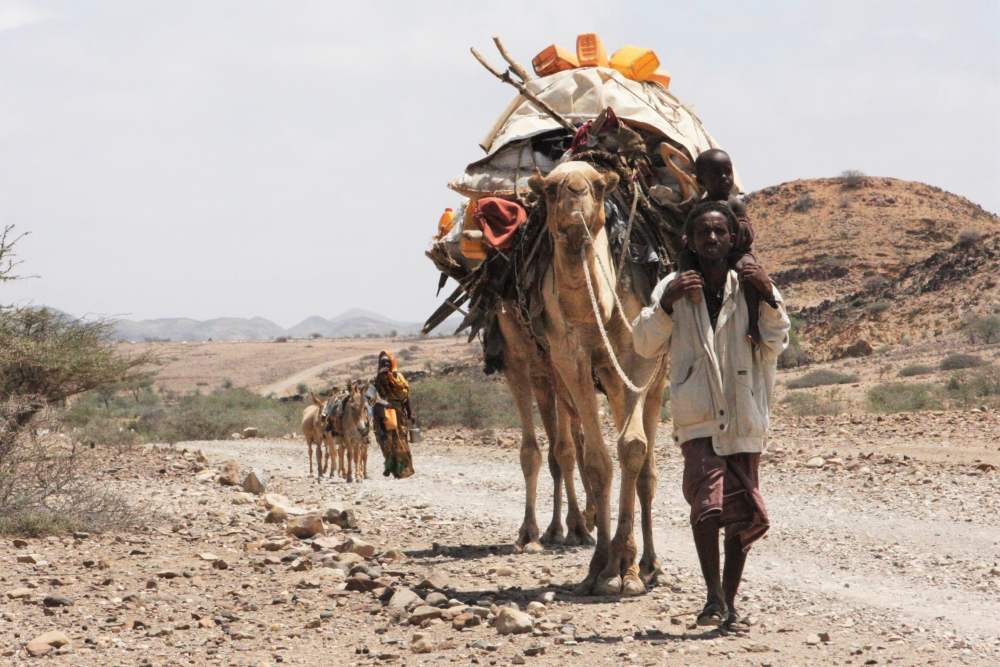 Traditional pastoralists from Ethiopia's drought-stricken Somali region crossed the border into Somliland in search of pasture, but it proved a false hope. Many are now stranded as hundreds of camels died in Somliland's parched plains. More than half a million… Read moreEl Niño and Ethiopia’s threatened pastoraists

BORAMA — Sitting on parched ground pummelled by the sun, a camel looks on majestically as pastoralists mill around it in a whirl of activity. Loaded onto its back are sacks of grains and pulses, yellow jerry cans, bottles of cooking oil, bits of fabric and plastic to make rough bivouac structures, and more.

After a final check of ropes, a woman makes a loud purring noise while gesturing upwards. The camel jerkily stands up, emitting a loud groan. Leading it by a rope, the family rejoins other pastoralists trekking through the Awdal Region abutting Somaliland’s northwestern border with Ethiopia: home for those on the move.

Faced with desiccated pastures in Ethiopia’s Somali Region last November, these pastoralists and many others responded to rumors of rains and good pasture hundreds of kilometers away on the coast of Somaliland, an internationally unrecognized but de facto sovereign nation separate from Somalia.

But, when they got there, there wasn’t enough rain or pasture for the numbers that descended. Thousands of goats, sheep, cows, and even drought-hardy camels died, buried in mass graves to prevent disease spreading. (It still broke out, killing further livestock). Now, the pastoralists are returning to Ethiopia, or trying to do so.

Ethiopian security forces have killed more than 400 since November, and arrested tens of thousands more, in efforts to quash protests in the Oromia region.