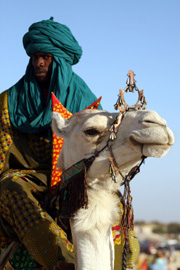 A Malian Tuareg rides near Timbuktu. Several hundred civilians fleeing fighting between the army and Tuareg rebels in northern Mali have crossed the border into Burkina Faso since April. Over 300 are being sheltered at the football stadium in Ouagadougou. A further 600 are setting up makeshift shelters in Djibo, some 50 kilometers from the Mali border.

Violence between Malian troops and Tuareg guerillas has been mounting over recent months. On May 21, the Malian government confirmed 27 soldiers and rebels were killed and 31 wounded in clashes in the north of the country.