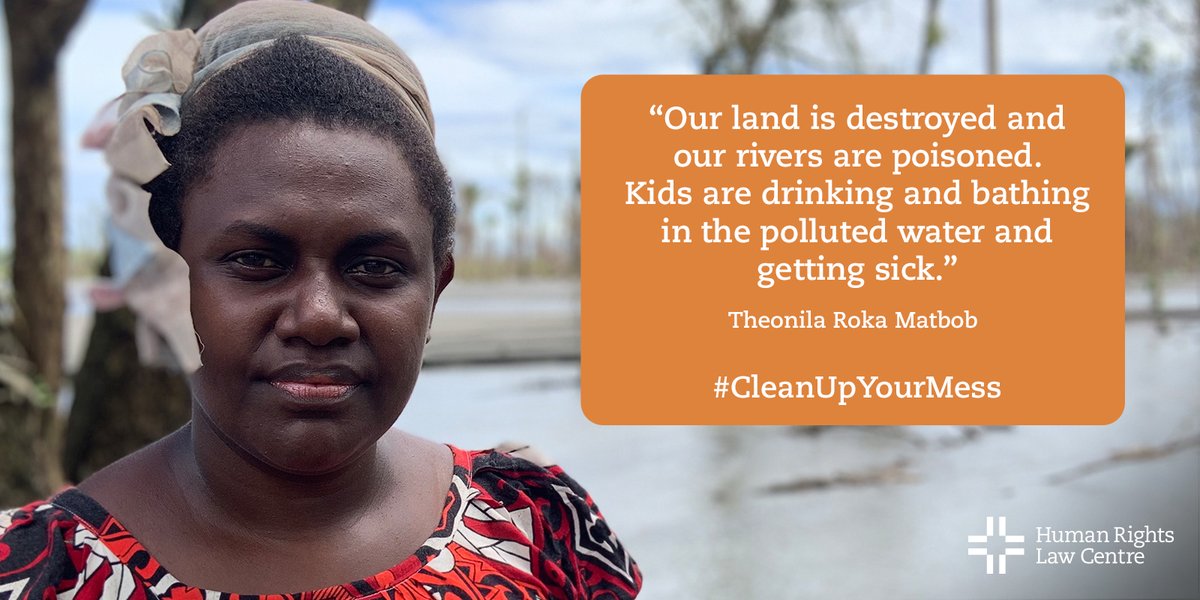 Mining giant Rio Tinto is responsible for multiple human rights violations caused by pollution from its former mine on the Pacific island of Bougainville, the Human Rights Law Centreconcludes in a new investigative report. For 45 years, the Panguna copper and gold mine on Bougainville, Papua New Guinea, was majority-owned by the British-Australian mining company, but in 2016 Rio Tinto divested from the mine, leaving behind more than a billion metric tons of mine waste. The report, After the Mine: Living with Rio Tinto’s Deadly Legacy, documents the devastating consequences of that action for the thousands of people living around the mine site. Based on visits to 38 villages, the report reveals communities living with contaminated water sources, land and crops flooded by toxic mud, and health problems ranging from skin diseases and respiratory ailments to pregnancy complications.

Theonila Roka Matbob (pictured), a local teacher and traditional landholder from Makosi village downstream of the mine, appealed to the company to return and address these urgent problems: “The Panguna mine devastated our communities physically and culturally and we are still living with the consequences. Our land is destroyed and our rivers are poisoned. Kids are drinking and bathing in the polluted water and getting sick. New areas of land are still being flooded with the waste from the mine. We urgently need Rio Tinto to come back and deal with these problems so our communities can find healing.”

Panguna was previously one of the world’s largest copper and gold mines. During its operation from 1972 to 1989, the mine generated almost $2 billion in revenue for Rio Tinto and the Papua New Guinea government. In 1989, an uprising by local people over the environmental destruction caused by the mine and inequities in the distribution of its profits forced the mine’s closure and triggered a brutal decade-long civil war.

Keren Adams, legal director at the Australia-based Human Rights Law Centre and author of the report, said that Rio Tinto’s failure to address its legacy in Bougainville was shameful: “Rio Tinto’s decision to cut and run from Panguna without addressing the massive problems created by the mine is an appalling breach of its responsibilities. During this research, we spoke to children with skin ulcers that never heal. We heard from families whose loved ones had drowned trying to cross rivers flooded with mine waste, and women who now have to walk two hours every day to lug water back to their communities because their nearby creeks are now poisoned by copper. This is not a historical issue, it is an ongoing human rights disaster and Rio Tinto must immediately act to address it.”

The impacts of the mine continue to infringe nearly all the economic, social and cultural rights of local communities, including their fundamental rights to food, water, health and housing, the report concludes.

The Human Rights Law Centre has called on Rio Tinto and its former subsidiary, Bougainville Copper Limited, to immediately commit to funding an independent assessment of the mine to identify the most urgent health and safety risks to communities, and establish a substantial fund to address these problems and assist with long-term rehabilitation.