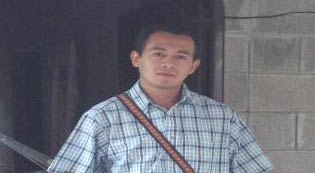 From the Committee in Solidarity with the People of El Salvador (CISPES), Jan. 11:

FMLN mayor assassinated in Usulután
Wilber Moises Funes, mayor of Alegria, Usulután, was assassinated on January 9 while visiting community projects in the Las Casistas area of his municipality. A member of the FMLN opposition party, Funes was shot along with municipal staff member Zulma Rivera. Rivera was killed immediately, while Funes died in transit to a hospital in Santiago de Maria.

Wilber Funes, one of the youngest mayors in the country, was dedicated to creating projects for the benefit of the poorest communities in his area while defending the interest of public services still owned by the municipality. The FMLN and civil society organizations denounced the killing and demanded that Salvadoran Attorney General Felix Garrid Safie authorize an immediate, independent, and objective investigation into the assassinations.

Incidentally, Funes’ government in Alegria was the victim of a privatization scheme following its election in 2006. Immediately before leaving office, the preceding municipal administration, from the right-wing ARENA party, handed over the Laguna Alegria Natural Park to a community development association called ADESCAM. The privatization of this valuable resource was part of a broader ARENA strategy to leave newly-elected FMLN municipal governments without the resources to function.

2007 closes with increased social and economic insecurity
El Salvador emerged from 2007 in even worse economic condition than at the start of the year, due largely to ARENA’s poor government management. Despite President Antonio Saca’s discourse about economic growth and the positive results of his violence reduction plans, the reality for most Salvadorans is that the economic and social crises intensified in the last year. In terms of the economy, the fact that more than 500 Salvadorans attempt to migrate to the U.S. every day undermines whatever economic growth Saca’s administration boasts about in the media. Remittances from family members in the U.S. continue to sustain the economy, but even that source of income has come under risk, as more Salvadorans were deported from the US in the first 6 months of 2007 than during the entire year of 2006.

The dramatic rise in deportations is causing many to question Saca’s description of US-El Salvador relations as healthy. The much-hyped renewal of Temporary Protection Status (TPS) for some Salvadorans covers only a small portion of the 2-3 million who live in the US. Meanwhile, El Salvador continues to be the only Latin American country with troops in Iraq.

Despite ARENA’s “tough on crime” rhetoric, 2007 saw more than 3,500 homicides— an average of nearly 10 per day. At least 10 bodies were found dismembered, reminding Salvadorans of the atrocities of the civil war. Politically-motivated killings were commonplace in 2007, as well. The vast majority of homicides remain unsolved.

Another controversy highlighting ARENA’s failure involves a $460 million “donation” by the Millennium Challenge Corporation (MCC—a US government institution) to El Salvador. A recent study revealed that El Salvador fails to meet 9 of the 17 criteria required for MCC funds to be awarded, including areas such as a lack of social spending, limited protection of natural resources and the failing justice system. In terms of social spending, the MCC requires recipient countries to spend a minimum of 1.88% of their GDP on education, while El Salvador barely spent 1.4%. In terms of the justice system, more than 80% of criminal cases do not get resolved, according to San Salvador Bishop Gregorio Rosa Chavez. Saca’s government insists it is implementing plans that will reverse the situation. A failure to do so would force the US Congress to cut the funds.

ARENA consolidates control of electoral system, but struggles to produce presidential candidate
In the last days of December 2007, The Organization of American States officially approved its audit of the Salvadoran electoral registry. According to ARENA’s legislative Chief of Fraction Guillermo Gallegos, the “registry is trustworthy.” However, both social organizations and the FMLN believe that these results cannot be trusted.

Furthermore, the Supreme Court of Justice (CSJ) recently ruled that right-wing PCN party member Julio Moreno Niños may continue serving on the Supreme Electoral Tribunal (TSE). The ruling comes almost three years after the FMLN presented an unconstitutionality claim against Moreno’s position on the TSE. According to 2004 election results, the position should have belonged to two smaller parties, the CDU (now known as CD) and the Christian Democrat Party (PDC). However, the right-wing bloc once again maneuvered so that a PCN member would sit on the TSE, leaving 3 out of 5 votes in the TSE to the right wing. The FMLN will appeal this case to international court, as it illustrates what FMLN deputy Jorge Jimenez calls the “macabre alliance of the right wing and the Supreme Court of Justice.”

Meanwhile, ARENA is struggling to select its candidate for the 2009 presidential elections. After months of changing dates and putting forth a long list of possible candidates, ARENA president Antonio Saca announced this week that the official date of inscription for those interested in competing for the presidential candidacy will be January 21. ARENA’s most talked about presidential possibilities, businessman Roberto Murray Meza, Security Minister Rene Figueroa, and Water Administration president Cesar Funes, all declined this week to participate in the race for the nomination. Some members of ARENA insist the process should be sped up, given the advantage the FMLN has gained since selecting its presidential ticket last year.

Desperate ARENA accuses Chavez of financing FMLN campaign
The internal divisions within ARENA have led to increased attacks on the FMLN. ARENA has criticized the FMLN municipal government in San Salvador, led by mayor Violeta Menjívar, for soliciting a loan from the Social and Economic Development Bank of Venezuela, which ARENA believes will be used for the FMLN electoral campaign. However, the loan is being requested to help alleviate problems with garbage collection and its processing. The $10 million loan is for the purchase of garbage compressors and to finance a recycling awareness campaign. Negotiations for the loan are in their initial stage, as the bank is doing reinvestment analysis while the municipality is carrying out an environmental study. According to the Rolando Mata, general manager of the municipal government, “ARENA is in full campaign mode. Since they have nothing to offer, the only thing they can do is attack Dr. Violeta Menjívar.”