One Year after the Murder of Journalist Regina Martínez

by Andalusia Knoll, Upside Down World

On April 28, 2012 journalist Regina Martínez was found strangled in the bathroom of her home in Xalapa, the capital of the southern Mexican state of Veracruz. Martínez was a renowned journalist with the Mexican weekly magazine Proceso, which for the past 36 years has been publishing articles about narco-trafficking, the war on drugs, and government corruption, among other topics. While Martínez reported frequently on all of these aforementioned topics, the Veracruzan government negated the fact that she was killed for her publications, instead attributing her murder to a common robbery.

Her assassination and the impunity surrounding it has become an emblematic case in the crisis suffered by journalists in Mexico. Over the last decade, Mexico has become one of the most dangerous countries for journalists, with increasing assassinations, forced disappearances, and physical threats against members of the media. According to press freedom group Article 19, threats against journalists in Mexico rose 20 percent from 2011 to 2012. Meanwhile, in the four months since president Enrique Peña-Nieto has taken power, the number of threats has risen another 20 percent. The Committee for Protection of Journalists has classified Mexico as the eighth worst country in the world for journalists in its annual Impunity Index.

END_OF_DOCUMENT_TOKEN_TO_BE_REPLACED

Honduras is plagued by the world’s highest homicide rate. This has been widely reported for the past two years, yet the number of deaths has continued to climb. The UN put the number of homicides in 2011 at 91 per 100,000. The rate has spiked since the illegal coup d’état that ousted the country’s democratically elected president in 2009 and the subsequent breakdown of Honduras’ institutions; in 2008 the homicide rate was 61 per 100,000.

A climate of impunity solidified as the generals and others who carried out the coup were rewarded with appointments in the post-coup government rather than prosecuted for their role in the overthrow.

Contrary to what is often suggested in the press, the violence is not just random or drug- or gang-related; some of the most vulnerable sectors in society are frequent targets — those whose rights the US Department of State tells us it considers to be a high priority—women, the LGBT community, journalists, opposition party politicians and Hondurans who opposed the coup. Twenty-five journalists have been murdered in Honduras since the 2009 coup; all but one of them since the current post-coup president, Pepe Lobo, took office in January 2010. At least 53 lawyers were killed between 2010 and 2012.

END_OF_DOCUMENT_TOKEN_TO_BE_REPLACED 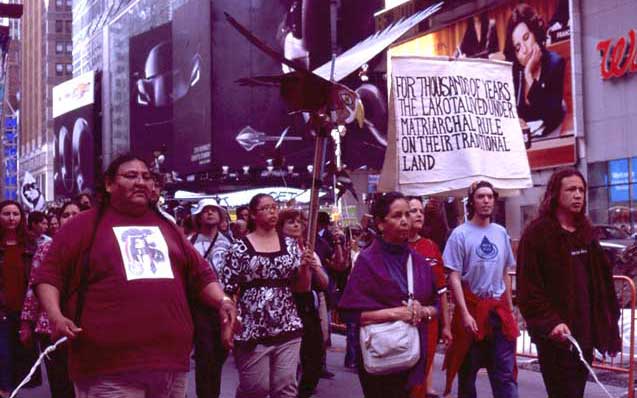 On April 9, Lakota elders, activists and non-indigenous supporters marched through the streets of Manhattan to the United Nations, where they attempted to present a petition to UN Secretary General Ban Ki-Moon. Entitled the “Official Lakota Oyate Complaint of Genocide… Read moreLakota elders march on UN

NEW YORK — On April 9, Lakota elders, activists and nonindigenous supporters marched through the streets of Manhattan to the United Nations, where they attempted to present a petition to UN Secretary General Ban Ki-Moon. Entitled the Official Lakota Oyate Complaint of Genocide Based on the 1948 Convention on the Prevention and Punishment of the Crime of Genocide, the petition listed the numerous injustices faced by the Lakota people. (Oyate is a Sioux word for “people” or “nation.”)

At the UN, security officers informed them that they would not be able to enter the building and present the complaint to the Secretary General. Instead, the security officers offered to take it to Ban’s office, but refused to give the Lakota documentation verifying that their complaint had been received.

Outside the UN, Charmaine White Face, a Lakota grandmother and great-grandmother, addressed the 60 people who had marched with her. “We come here as a nation. If they won’t let us take our message to them, how disrespectful is that to a nation?”

Israeli missiles struck a research center near Damascus, as massacres of Sunni families by pro-government militias are reported from Syria’s coastal Alawite stronghold.

Chaudhry Zulfikar, chief prosecutor in the criminal case against Pakistan's former president Pervez Musharraf, was shot and killed in a drive-by shooting on his way to a hearing.

Mohamedou Ould Slahi, a Mauritanian detained at Guantánamo since August 2002, has had portions of his handwritten prison-camp memoir published in Slate magazine.