Al-Shabaab militants launched an assault on Somalia’s Supreme Court, resulting in at least 35 deaths—one of the worst attacks in years for the country’s capital of Mogadishu. 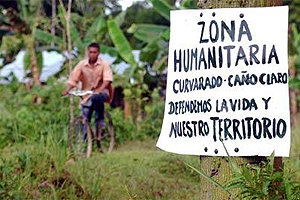 Afro-Colombians displaced from their lands by a “paramilitary-business alliance” have in recent years returned, building new communities known as “Humanitarian Zones,” which are now legally recognized as neutral zones where all armed actors, legal and illegal are prohibited from entering…. Read moreCurvarado Humanitarian Zone

Colombian Communities Reclaim Land and Life
from the Paramilitary-Business Alliance

by James Bargent, Toward Freedom

The first of the displaced people to return to their homes in Curvarado, north Colombia found the forests they had known cut down, the rivers and streams diverted and the native wildlife long gone. It was a desert, they say—not of sand but of African-palm and cattle ranches.

Standing in the shadows behind the palm businesses and ranchers that had taken over the region were the same paramilitaries that had forced them from their homes several years before.

But still the people came. They built new communities known as “Humanitarian Zones,” which are now legally recognized as neutral zones where all armed actors, legal and illegal are prohibited from entering. They also began the process of reclaiming the land exhausted by the agri-business onslaught, dividing recovered territory into “Biodiversity Zones.”