THE DARK SIDE OF WIKILEAKS?

The case of Bradley Manning is a morally stark one. Even the UN Special Rapporteur on Torture has censured the United States for its harsh measures against the young man who blew the cover on US atrocities in Iraq through WikiLeaks.

But the voluminous trove of classified diplomatic cables released by WikiLeaks goes far beyond the “Collateral Murder” incident in Iraq. The release of most of this information can be justified in the name of the public’s right to know.

However, rights advocates have raised fears that some of the revelations may have placed pro-democracy dissidents at risk in authoritarian regimes. Worse, a WikiLeaks “accredited journalist” is accused of actively collaborating with a dictator. WikiLeaks has failed to meaningfully respond to charges of complicity with grave human rights abuses in Belarus, the country dubbed “Europe’s last dictatorship.”

END_OF_DOCUMENT_TOKEN_TO_BE_REPLACED

SYRIA: THE MYTH OF PALESTINIAN NEUTRALITY

On July 14, thousands of Palestinian refugees marched in a funeral procession for 11 unarmed protesters shot dead by Syrian security forces in the al-Yarmouk refugee camp. Raucous and seething with rage, mourners chanted for Syria and Palestine, called for the downfall of Bashar Assad’s regime, and sang for freedom.

Whether this burgeoning civil disobedience movement will grow into an open, durable rebellion remains to be seen, but the significance and the potential influence of the latest wave of protests that has swept Syria’s largest Palestinian camp cannot be overlooked.

END_OF_DOCUMENT_TOKEN_TO_BE_REPLACED

Enmity From Above, Amity From Below

by Richard Abernethy, US Marxist-Humanists

On one level, the threat of war between Israel and Iran is a real conflict, a struggle between two state powers for dominance in the Middle East. On another level, each set of rulers finds in the other a "useful enemy," an external threat that appears to validate its ideology, and consolidate its rule at home.

In both countries, there is a body of enlightened opinion that opposes the rulers' drive toward war. In an extraordinary new development, Israeli and Iranian dissidents have come together, first over the Internet and more recently in person in Berlin, to oppose the drive to war.

END_OF_DOCUMENT_TOKEN_TO_BE_REPLACED 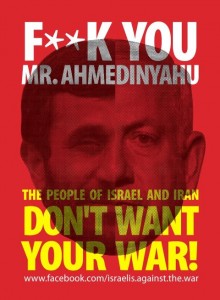 Protesters and dissidents in Israel and Iran alike are uniting against the threat of war between their countries. A Facebook meme satirizes the leaders of both countries under the portmanteau “Ahmedinyahu.” In May, Iranians and Israelis held a joint rally… Read moreF**ck You, Mr. Ahmedinyahu

In his inaugural speech, India’s new president, Pranab Mukherjee, called the fight against terrorism the “fourth world war,” and portrayed his own country as a frontline state.