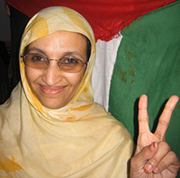 A Matter of Life and Death

by Stefan Simanowitz, Toward Freedom

Aminatou Haidar’s hunger strike, staged in protest after being deported for refusing to acknowledge Moroccan sovereignty over Western Sahara, unleashed an intensive political and diplomatic activity in Spain, the US, the United Nations, and the European and African Unions. On December 19th, a 32-day standoff that had been playing out on the Canarian Island of Lanzarote between the Moroccan government and the hunger-striking Nobel Peace Prize nominee, reached its dramatic conclusion.

A day that began with Haidar’s hospitalization ended with the 42-year old mother of two being flown home to her family without having made any concessions to the Moroccans. Her homecoming was, in her own words, a victory for ‘international law, for human rights, for international justice” but it was also significant in that it was the first time in the 34 year history of the conflict that the international community had effectively intervened in Western Sahara to persuade Morocco to adhere to its obligations under international law. By capturing both the attention of the media and the imagination of the public, Haidar’s hunger strike gained massive public support and succeeded in propelling the issue of Western Sahara onto the political agenda. And yet despite these achievements and indeed perhaps because of them, Morocco seems intent on continuing a regime of violent suppression against Saharawis who call for self-determination. Recently, seven of the country’s most prominent human rights defenders were brought before a prosecutor in a military court in Rabat accused of treason. If found guilty, they could face the death penalty.

Aminatou Haidar’s deportation was condemned by governments, civil society groups and human rights organizations around the world and resulted in the direct intervention of Hillary Clinton, Nicolas Sarkozy and Ban Ki Moon. The Moroccans who had stated that Haidar would only be allowed home if she recognized Moroccan sovereignty over Western Sahara and apologized to King Mohammed VI, were forced into a very public climb down that no amount of carefully-worded diplomatic statements could disguise. Indeed on her return to Laayoune Haidar rubbed salt in the wound: “I will never apologize to the King” she told waiting journalists. “I am waiting for him to apologize to the Sahawari people for their suffering and their torture.”

Since her return, the situation in Laayoune has remained tense with a number of Haidar’s supporters having been beaten or arrested. Reuters reported that Haidar, who has endured over four years of imprisonment and torture in the past, had been placed under virtual house arrest and that journalists were banned from visiting her. Although Haidar’s new-found media profile might afford her a degree of protection from state harassment, other human rights defenders do not enjoy the same protection. This is evidenced by the treason charges leveled against seven prominent human rights activists. They were arrested in October after returning from a visit to the refugee camps in the Algerian desert where 165,000 Saharawi’s have been forced to live for over three decades. Human rights groups have expressed particular concern over the physical and mental condition of one of the seven, Degja Lashgar, held in solitary confinement for three months. In the past numerous, bodies including the UN High Commissioner for Human Rights have raised concerns over violations of human rights in Western Sahara, but these have been brazenly ignored by the Moroccans.

Last November King Mohammed VI gave a speech in which he branded as “traitors” anyone who questioned Moroccan sovereignty over her “Saharan provinces”. This week he has announced a new committee to draw up an ‘autonomy plan’ for Western Sahara. Rather than signaling a new more open approach to the dispute, it seems like the Moroccan decision to allow Haidar to return home has made Morocco even more determined to prevent the long awaited referendum on self-determination in the territory. And yet if the Haidar debacle shows anything, it clearly demonstrates that Morocco will shift its position if subjected to sufficient international political pressure.

There are signs that the international community are now taking the situation in Western Sahara more seriously and at the end of 2009 the United Nations identified the conflict in Western Sahara as one of the “urgent issues” to resolve in 2010. Since 1975, the UN has passed over a hundred resolutions on Western Sahara, reaffirming Western Sahara’s inalienable right to self-determination and although it is very unlikely that the UN will pass any enforcement measures such as sanctions there are nonetheless other significant steps it can take. In April, the mandate for the UN mission in Western Sahara (MINURSO) is up for renewal and there are hopes that this mandate will be extended to include a human rights monitoring role. At present, MINURSO is the only UN peacekeeping mission without such a role.

There are indications that the Obama administration would like to find a resolution to the conflict in Western Sahara that conforms to international law and, as evidenced by the key role played by the Spanish and French governments in resolving the hunger strike, Morocco’s ties with the European Union are crucial. The EU has strong relations with Morocco through its European Neighborhood Policy and it recently agreed to grant Morocco ‘advanced status’ relations reducing trade restrictions and increasing political and economic cooperation. The condition of advanced status however requires a demonstrable commitment to human rights.

Aminatou Haidar stressed throughout that her hunger strike was not about the single right of one individual to return to her home but about the collective right of all Saharawis to live freely in their own land. Although she is back with her family, the situation for the Saharawis living under occupation in Western Sahara or as refugees in the desert, has not changed. For a few brief weeks, Aminatou Haidar forced the worlds gaze on to one of the world’s longest running and least remembered conflicts. We must not look away now.

Stefan Simanowitz is a journalist and broadcaster. He is chair of the Free Western Sahara Network and spent time with Ms. Haidar in Lanzarote. This article first appeared Jan. 12 in Toward Freedom.