When Lutxo Rodríguez recalls the local punks and social outcasts of the downtown district he habituates "dressing in black in the '80s," I smile wryly, remembering the Lower East Side of my own youth. But the urban decay that allowed for the florescence of bohemia and an anarcho-punk scene in this small enclave of a South American capital came "in the context of political violence."

This is Jirón Quilca, a narrow street just off downtown Lima's Plaza San Martín. Follow it west, and the stately old hotels and restaurants around the plaza quickly give way to dusty second-hand bookstores, where surviving murals on the exterior walls speak to a recent past of oppositional culture. Quilca, and the warren of small streets surrounding it, was long the haunt of Lima's "poets, punks, writers, and marginalized people," Rodríguez recalls.

A veteran leading figure in the scene, Rodríguez himself looks like he’s changed little. He is still dressed in a black-and-red color scheme, with long partly dyed hair, black beard and nose-ring. "But Quilca is not the same," he says. "It is full of lumpen as well as bohemia. There are still lots of bookstores, people still gather there in the evenings to drink and talk. But it isn't a focus of resistance the way it used to be." 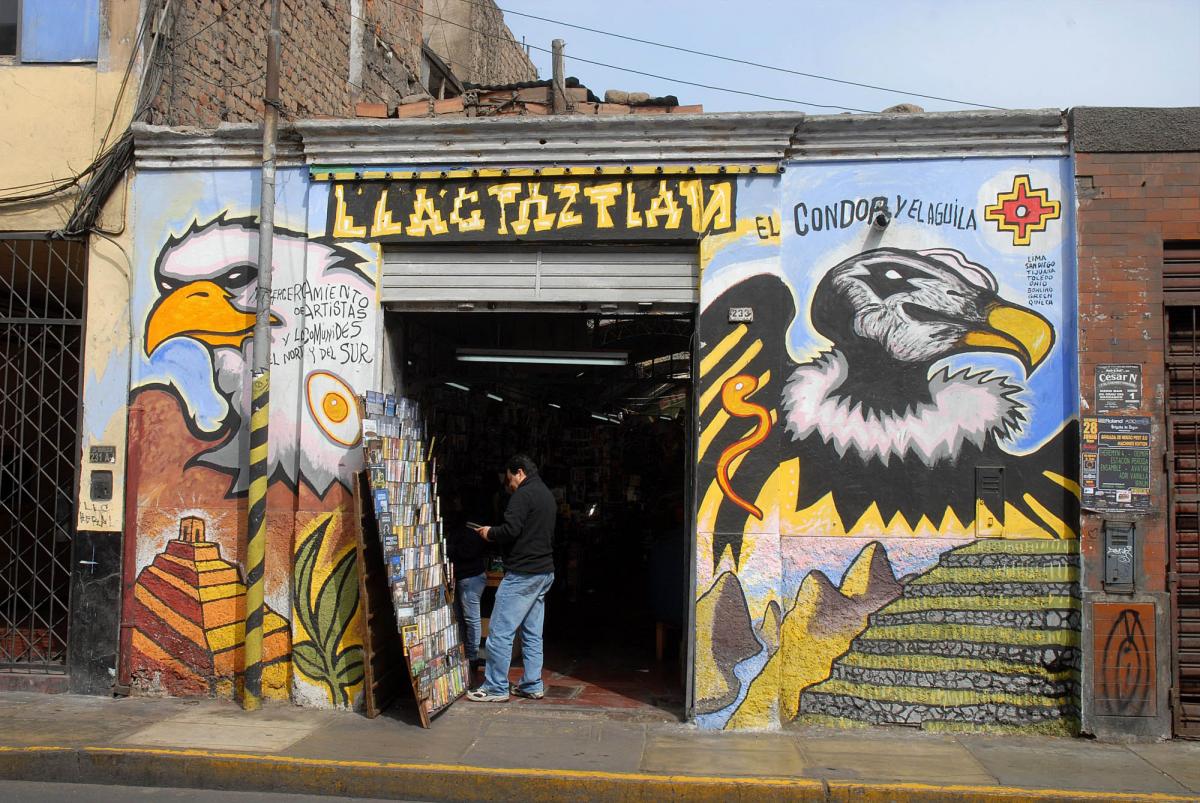 In the '80s and on into the '90s, Peru was wracked by the Shining Path and other guerilla insurgencies. Lima suffered a lawless atmosphere, and much property was abandoned, especially in the downtown area. In outlying areas, there was massive colonization of vacant land, as peasants fleeing violence in the countryside established squatter communities and "informal" barrios, creeping up the rugged slopes that overlook the city. As in North American cities in the '70s and '80s, crime and insecurity were endemic. 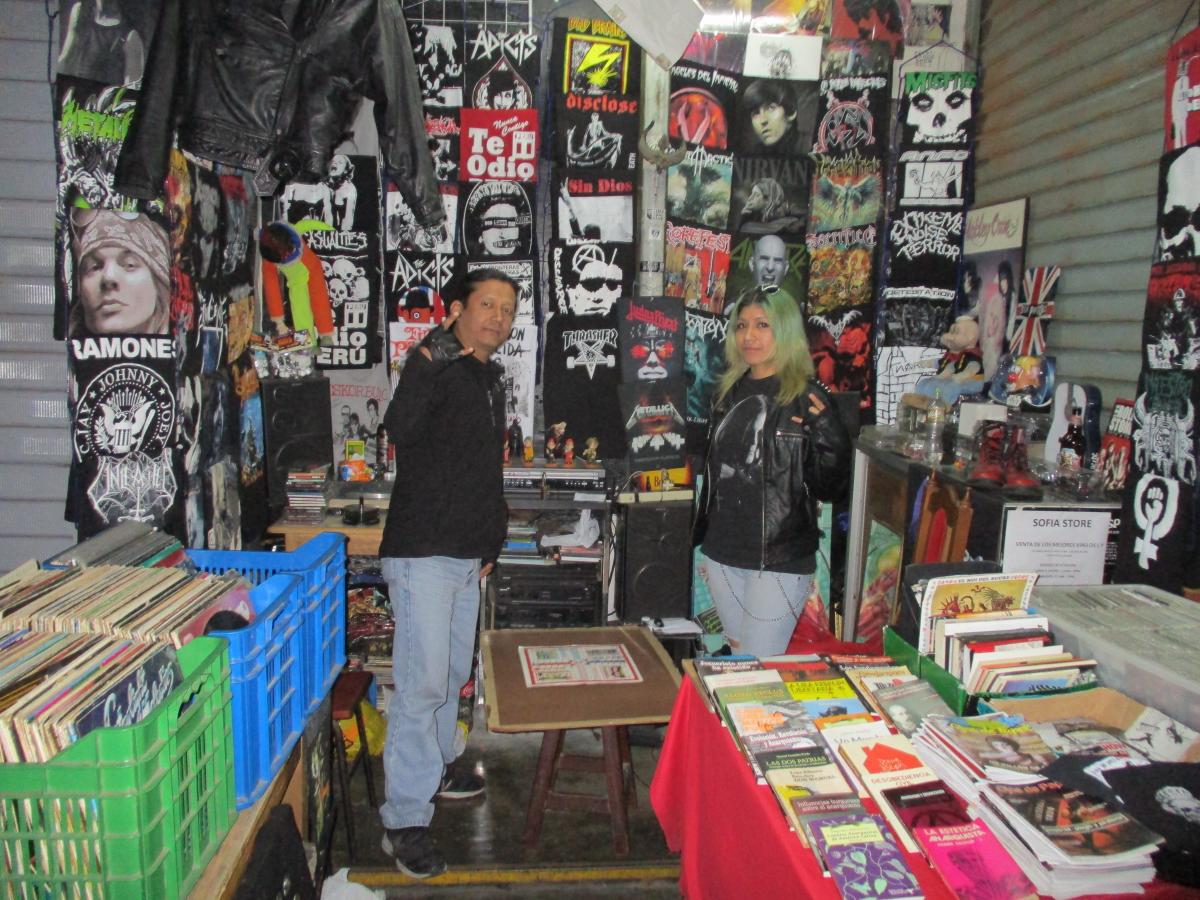 Rodríguez is keeping alive a stubborn remnant of alternative Quilca's heyday—El Eskupitajo (an alterno-spelling of the Spanish word for expectoration), a little stall in a pedestrian mall off Jirón Camaná, one of Quilca's feeder streets, selling punk records (yes, vinyl) and regalia, along with fanzines and some anarchist literature.

Much of this latter is published by Rodríguez's own imprint, Editorial Anarcrítica. Its most recent effort is a Spanish translation of HD Thoreau's Civil Disobedience, with an introduction by Rodriíguez. Desobediencia is also the name of the anarchist zine he has sporadically published since 2001. 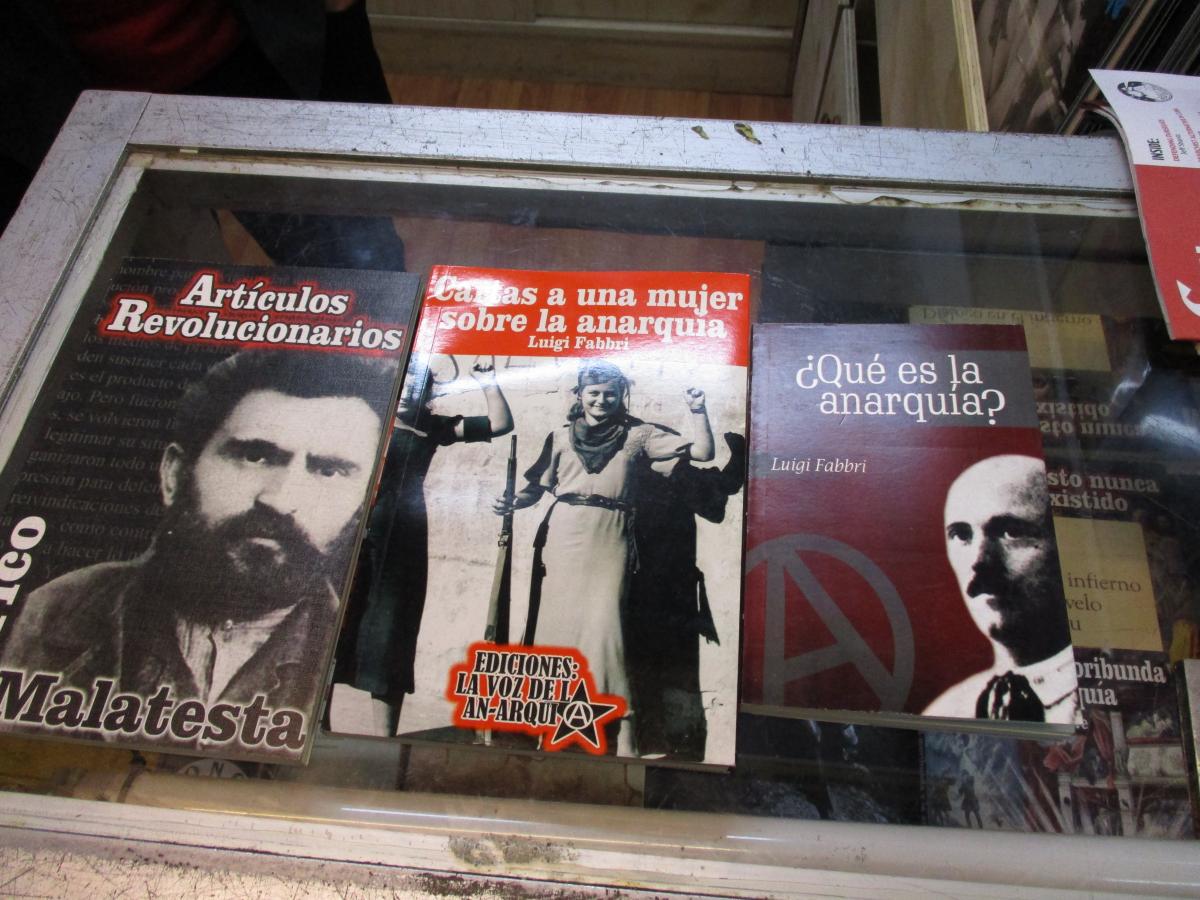 He also peddles anarchist lit (including translations of classics by Errico Malatesta and Luigi Fabbri) at Barricada Discos, the record stall he runs at Galerias Brasil, a mall in the nearby working-class neighborhood of Jesús María. Downstairs, traditional book-binders work alongside internet connection points, while one flight up punk and metal blare from numerous stalls that now constitute the city's principal magnet for rockero youth. Punks (especially the more political ones) are also called subtes in limeño argot—short for subterraneans.

Rodríguez poses for my camera in Barricada Discos while holding aloft a slab of vinyl from Autonomía, the most iconic band of Lima's subte scene. The sleeve sports a black cat and a black flag with the circle-A.

The changes to Quilca were clear to me when I passed through and met with Rodríguez in November. I had last been there four years earlier, in 2013. Then, a hub of the scene, El Haberno community center, had just recently been evicted. But the colorful and whimsical murals on its exterior walls were still intact. One read "14 years of counter-culture," an obvious epitaph for the center, painted with eviction impending. Today they are all painted over—but the building remains vacant, with someone obviously speculating on it."SE VENDE" (for sale) is scrawled on the bare streetfront. 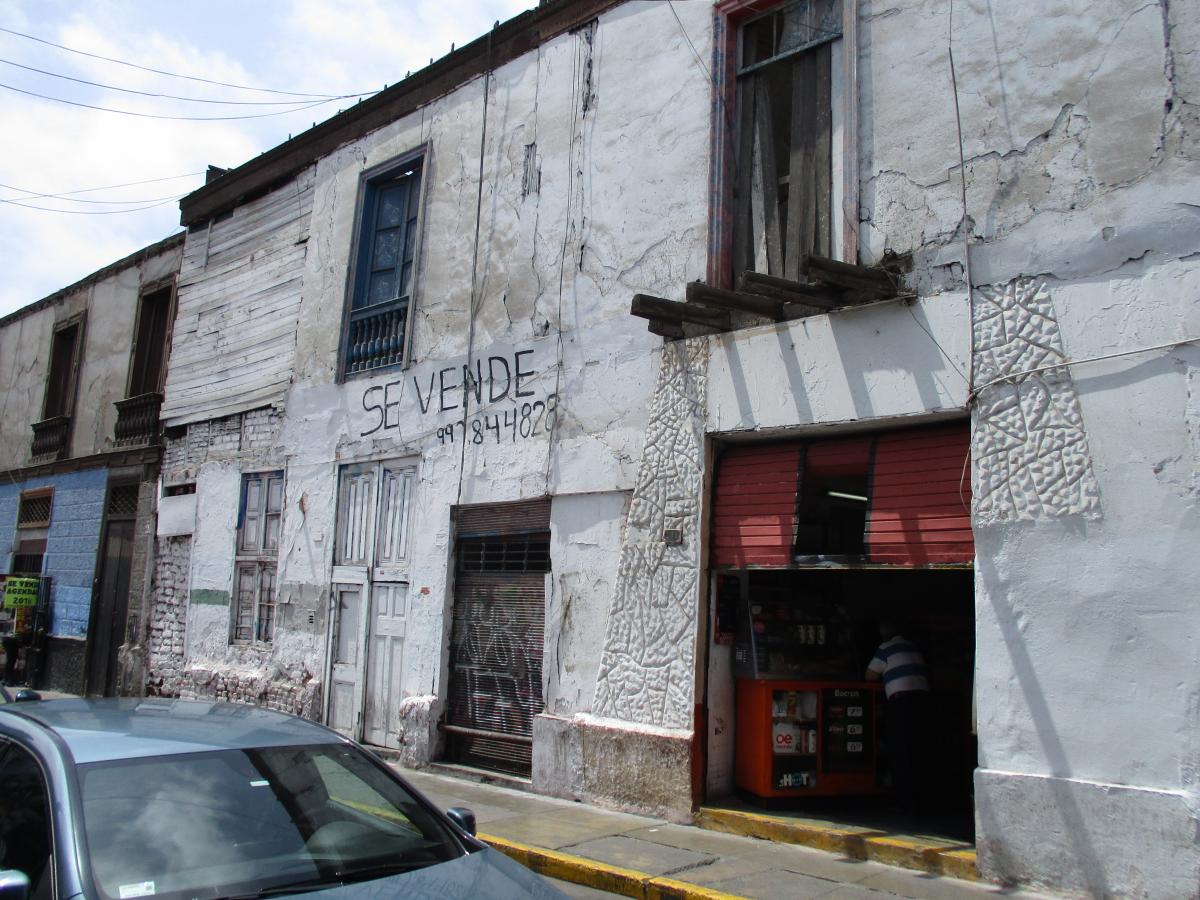 The lifespan of El Haberno (The Devil's Pit) is telling. When it opened in 1999, the property was disputed pursuant to its abandonment years earlier, allowing the activists and artists to move and in, and to pay little or nothing in rent. It was a sort of hippie-punk hybrid entity, attracting subte and DIY culture as well as followers of musica folklorica. One mural featured a portrait of El Jilguero del Huascarán (real name Ernesto Sánchez Fajardo), the folksinger from mountainous Áncash region who was also an advocate for the peasants, and was part of the constituent assembly that crafted Peru's new constitution after the end of the military dictatorship in 1979.

And when dictatorship briefly returned in 1992—as President Alberto Fujimori declared his "self-coup," suspending Congress and the constitution—Quilca had been a rare outpost of open defiance. After democracy was restored a second time and Fujimori was put on trial for corruption and ghastly human rights abuses, El Haberno pressed the question. Rodríguez recalls "murals and concerts openly opposed to Fujimori." 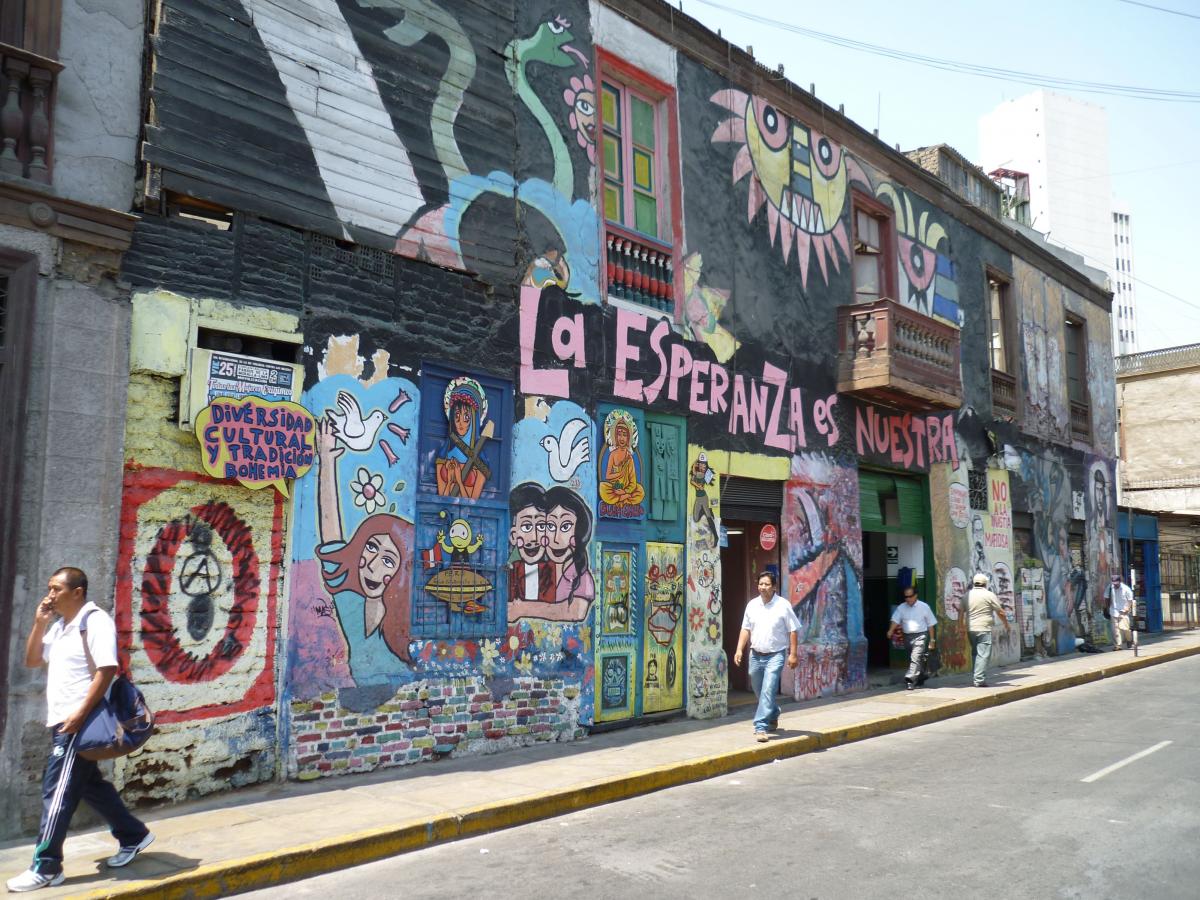 The demise of El Haberno is, of course, the bitter fruit of Lima's "recovery." With stability restored, property values are rising, and disputed titles are being cleared up. Space for alternative culture is fast shrinking.

Another great loss was the closure of the Boulevard de Cultura Quilca, the enclave’s biggest pedestrian mall, filled with stalls selling books, zines, political or psychedelic t-shirts, and other such alternative accoutrements. Rodríguez tells me how it once hosted an annual "Anti-Patriotic Festival" every July, when Peru celebrates its Independence Day. The site was owned by the Catholic Archdiocese of Lima, which in 2016 finally evicted the peddlers. It is now a parking lot—dubbed Playa (car lot) Quilca. 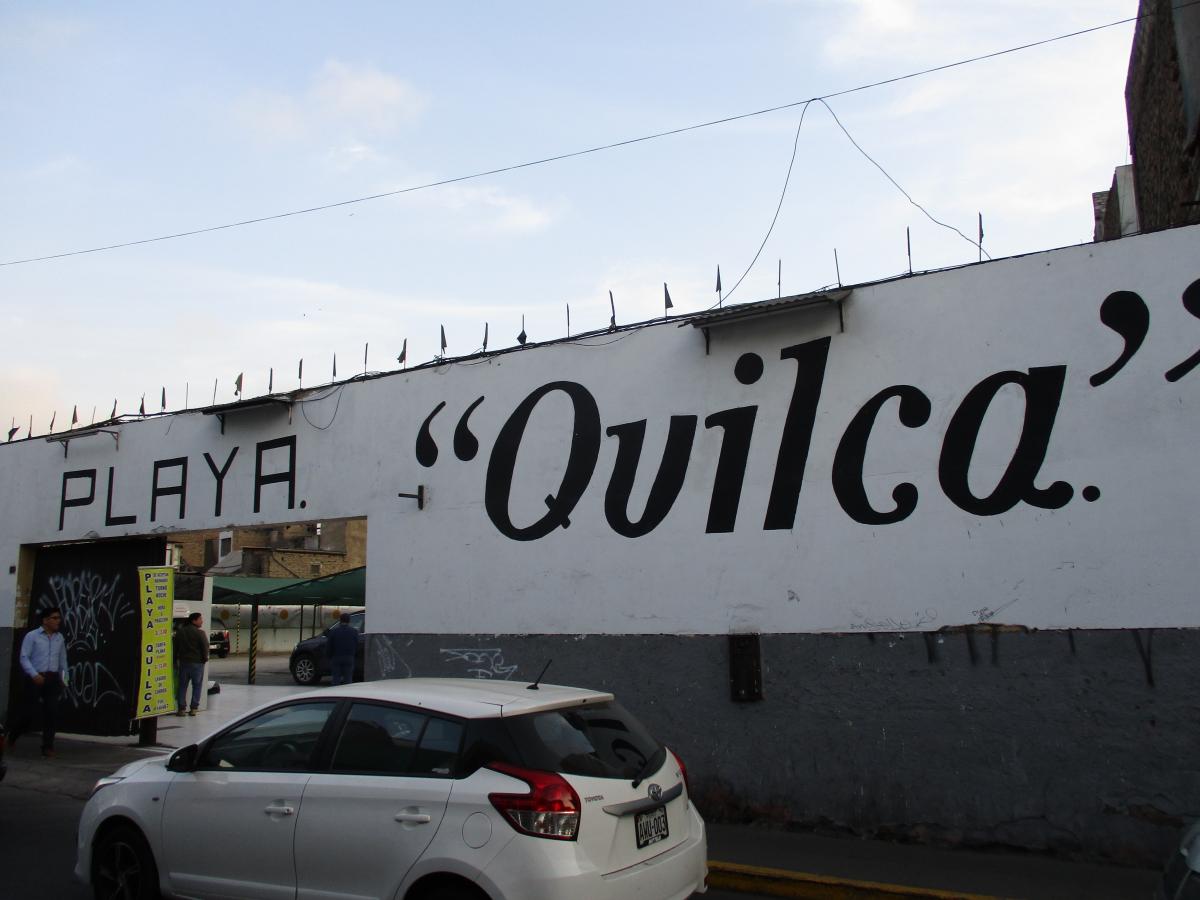 Yet another loss was the ironically named Salón Imperial squat and community center, just off Quilca on Jirón Colmena. This center actually dated back to the left-wing dictatorship of Gen. Juan Velasco in the late 1960s, when an old office building was turned over to the community. Through the subsequent conservative regimes, it had been held by various community groups on a more or less informal basis, tolerated if not officially permitted by the authorities. The lead group in control there when I visited in 2013 was the "Fonavistas," citizens who were swindled by the scandal-plagued housing fund FONAVI (akin to the foreclosure crisis around Fannie Mae and Freddie Mac in the US), and were demanding reparations. The building operated a big communal kitchen that fed hundreds of local residents daily, and provided space for numerous activist groups, including the Avancemos anarchist collective, which published a newspaper of that name. It also hosted punk rock shows and other cultural happenings. The teachers' union SUTEP, the most radical of Peru's labor unions, also had an office in the building, which was fashioned as a "Casa de Gobierno Directo del Pueblo" (House of Direct People's Government). 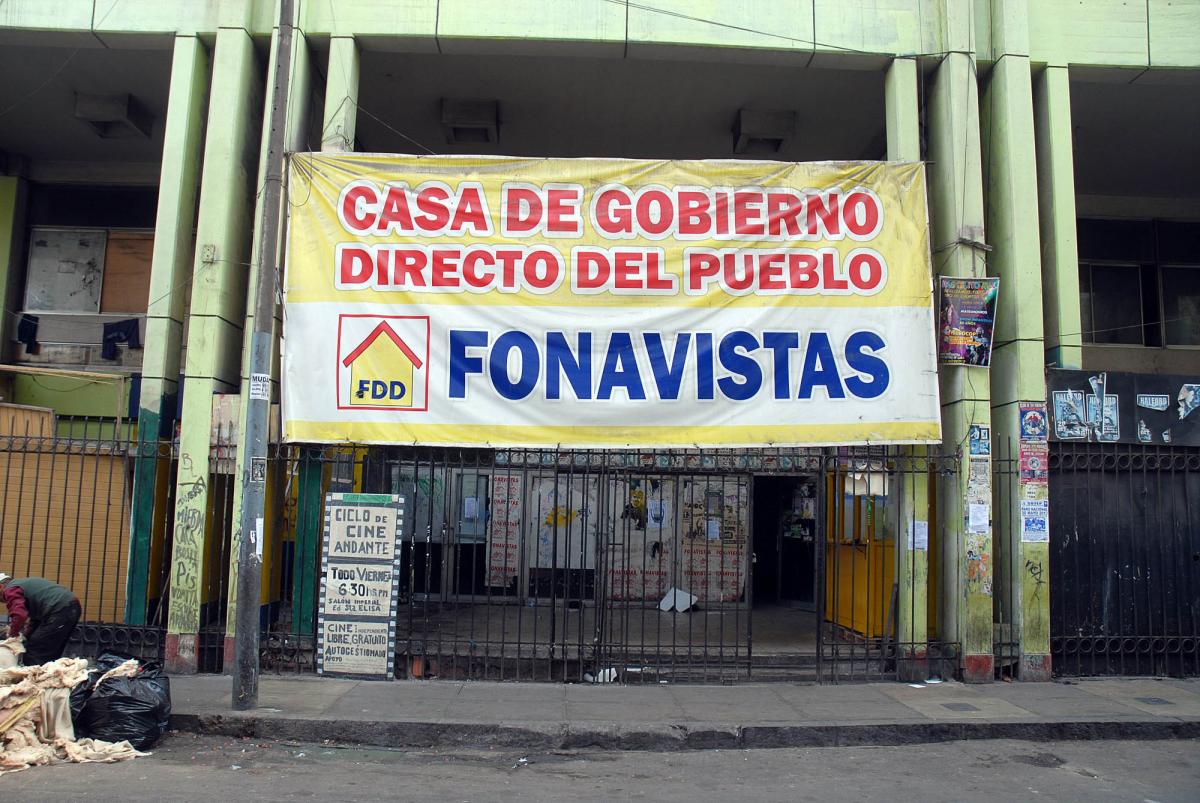 In February 2014, the Salón Imperial was gutted in a mysterious fire that left two dead. It remains vacant today.

Rodríguez runs me down a brief overview of the alternative spaces that have come and gone over the years. The Anarcho-Punk Social Center on Jirón Cailloma paid little rent to a disputed owner for four years before being evicted in 2006. The more hip-hop themed Casa Anarquía, a few blocks away near Plaza Bolognesi, was evicted after two years in 2012.

The only significant entry that survives today is a vegan space dubbed La Maleza (The Undergrowth), in Callao, Lima's port and sibling city.

Space has been closing more rapidly since Lima's 2014 mayoral election. When I visited in 2013, the city was still under the progressive administration of Susana Villarán. One of her more visible programs was encouraging the painting of murals on the city's blank walls, bringing a community touch, and often political and ecological themes, even to busy commercial districts. 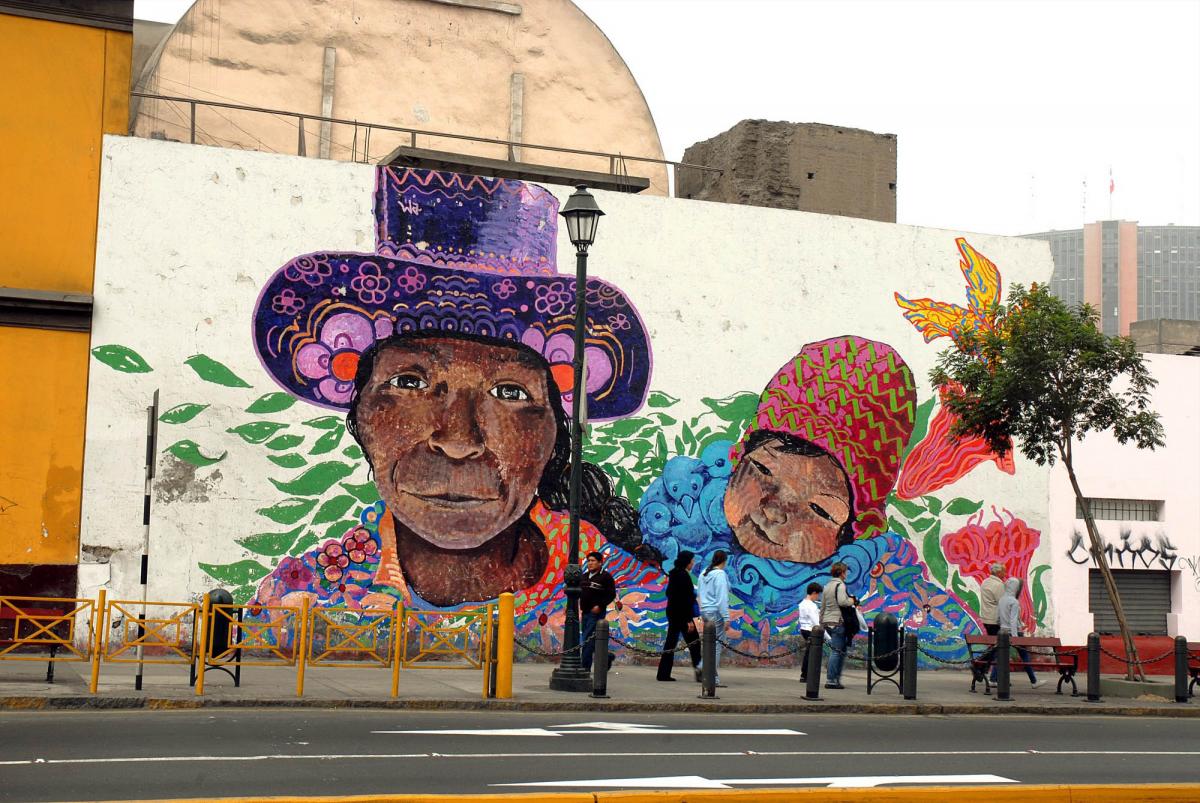 Now, the conservative Mayor Luis Castañeda has had nearly all of the murals painted over and is aggressively touting a clean-up of the city—much in the style of New York's Rudolph Giuliani a generation ago.

The history of the subtes is recounted in the book Punk and Revolution: 7 More Interpretations of Peruvian Reality by Shane Greene (Duke University, 2016). The title references the famous work 7 Ensayos de Interpretación de la Realidad Peruana (7 Interpretive Essays on Peruvian Reality) by the revered Marxist thinker of the 1920s, José Carlos Mariátegui.

Before it was eclipsed by Mariátegui’s Communist Party and the left-populist (and today completely bourgeois-coopted) APRA in the 1920s, Peru had a significant anarcho-syndicalist movement. And there actually is a lineage from this movement to the current scene.

The great grand-daddy of Peruvian anarchism was the polemicist and poet Manuel González Prada. His most important political work was his 1904 essay Nuestros Indios (Our Indians), an embarrassingly patronizing title by contemporary standards. But it was among the first to grapple with what would become a defining debate of the Peruvian left—whether the popular and especially rural masses are foremost economically oppressed as workers and peasants, or culturally oppressed as indigenous peoples. In this sense, it was an important precursor to the more influential works of Mariátegui.

Contemporaries of González Prada were the father-and-son anarchist duo of Manuel Caracciolo Lévano and Delfín Amador Lévano. Both were early labor organizers, back before the establishment of Peru's major unions, and were especially critical in the struggle for the eight-hour day, won through national legislation in 1919 (nine years before in the US). The younger, Delfín Lévano, a baker by trade, published the syndicalist newspapers La Protesta and El Proletariado through the early 1920s.

Delfín was the father of the journalist and historian César Lévano, who remains a significant figure on the Peruvian left today. He publishes the intransigent left-wing daily Uno, and intermittently teaches at Lima's San Marcos National University. He's the author with Luis Tejada of La Utopía Libertaria en el Perú, a history of the anarchist tradition in the country. In 2012, he was briefly imprisoned after being charged with defamation by conservative businessman and TV mogul Vicente Silva Checa. In the pages of La Primera newspaper, where he was then a columnist, Lévano had revealed Silva Checa's dirty dealings with Fujimori's notorious (and now imprisoned) spy chief Vladimiro Montesinos.

And Lutxo Rodríguez has sat in on some of César Lévano's classes at San Marcos, representing a passing of the torch from the syndicalists to the subtes.

Even if it lacks for meeting space, Lima's anarchist scene survives. Rodriíguez tells me it is divided between a "more conventional" current and an "anti-todo" (anti-everything) tendency—meaning "anti-intellectual, anti-organization."

As I write, in the closing days of 2017, Lima is exploding into protest following the pardon of Alberto Fujimori by the scandal-embattled sitting president, Pedro Pablo Kuczynski. After a decade behind bars, the ex-dictator has been transferred from his prison cell to a private clinic, in what looks like a sleazy deal with the hard-right fujimorista bloc in Congress to keep Kuczynski in power. Rodríguez tells me by internet that an emergency assembly has been called by the city's anarchist networks to respond.

With Peru plunging into political crisis, Lima's anarchist survivors may be looking at an opportunity to test their mettle—eviction, property squeeze and "clean up" notwithstanding.

Versions of this article also appeared in the Spring issue of Fifth Estate and the Feb. 19 edition of The Villager.

Photos by the author.

Survivors of the 'disappeared' protest in Lima
CounterVortex, Dec. 23, 2017