Manolo Miranda, leader of an indigenous community recently flooded by Panama’s Barro Blanco dam, now faces up to two years in prison for causing delays and financial losses to the company that has ruined his community’s way of life.

Miranda began trial Aug. 18, together with two other leaders of the Ngäbe-Buglé who opposed the dam, regional cacique Toribio García and religious and protest leader Clementina Pérez. All three face up to two years in prison for trespassing and interfering with the “inviolability of work” for their alleged role in an encampment that blocked the entrance to the hydro dam site in May and June of 2015. Charges against two other activists who were present at the encampment, Oscar Sogandares and Carmen Tedman, have been provisionally dismissed.

Human rights and environmental leaders say the case is typical of a growing trend of using the courts to silence and intimidate environmental and human rights defenders throughout the country. Some point to a request made in March of this year by the Inter-American Commission on Human Rights in Washington DC to meet with such defenders and try to address the problem. Miranda’s sister, Weni Bagama, was one of those who testified at the IACHR hearing in March, and Barro Blanco was one of the cases discussed. Government representatives have not responded to requests for information on this process or on the lawsuit.

“It’s very worrisome because this is not an isolated case,” said Susana Serracín of the Alliance for Conservation and Development (Alianza para la Conservación y Desarrollo), one of the organizations that worked over the years to halt the dam. “We are seeing a pattern of intimidation and harassment, and we are not seeing any support on the part of the government.”

Neither the Ministry of Foreign Affairs nor the Defensoría (human rights ombudsman) responded to Intercontinental Cry’s questions despite repeated e-mail contacts. 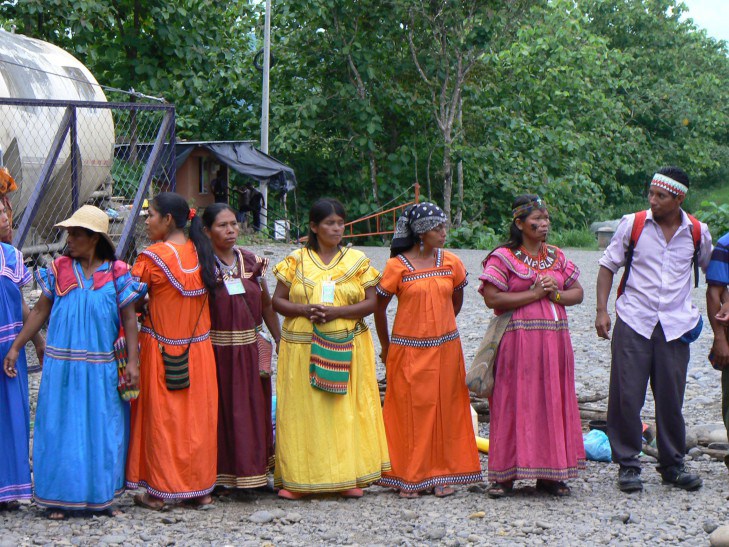 Part of a pattern

“It’s a very serious problem,” said Dr. Donaldo Sousa, president of the Panama Association of Environmental Law and a law professor at the University of Panama. Environmental crimes are being committed on a daily basis in Panama, he said, with activists denouncing them in good faith; he has filed more than 70 lawsuits in the past eight years. “The great majority have not been prosecuted,” he said. “Instead they [the courts] are going after the human rights defenders and the ecologists.”

As the Ngäbe leaders prepared for their trial, word came of another lawsuit against a development opponent in Panama City, in which his belongings were seized as a part of the investigation. Max Crowell, president of the homeowners association of Ciudad Jardin Albrook, won a lawsuit halting construction of a private school due to irregularities affecting the neighborhood. The company retaliated by suing Crowell; his home was searched and items were seized in the investigation.

Other cases of environmentalists being sued include:

Sousa told Intercontinental Cry that there are additional cases where environmentalists are being physically threatened, sometimes with death—as in the case of journalist Ligia Arreaga, who was forced to flee Panama last year for her defense of the country’s largest wetlands, Matusagaratí. In June of this year, two owners of a palm-oil company were sentenced to two years in jail for environmental crimes against the wetlands; nonetheless, those who made attempts on Arreaga’s life remain at large and there is no apparent effort to prosecute. 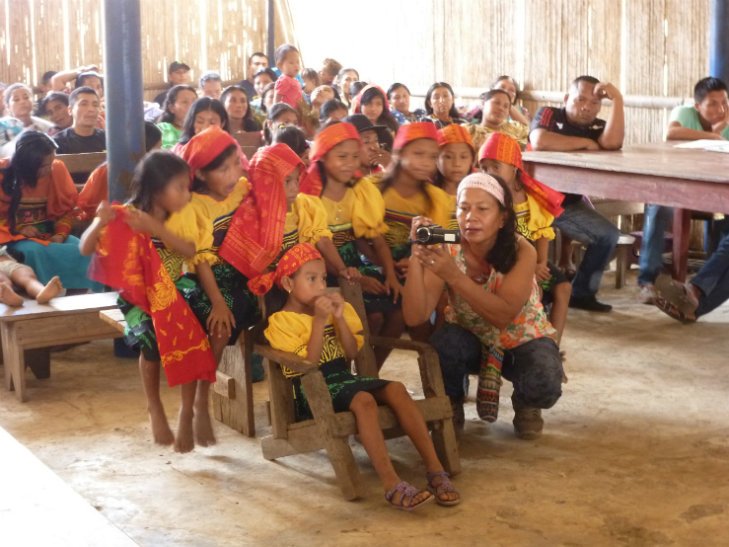 In the Barro Blanco case, Sousa filed a lawsuit before the dam was built against the individuals who carried out the environmental impact study, as well as Public Services Agency director Roberto Meana, and former Minister of the Environment Mirei Endara. The complaint charged that fundamental data regarding damage to the area’s archaeological heritage, environment and quality of life for the communities was false or missing.

“The result of that complaint was that nothing was done, it was not investigated at that time,” said Sousa. “Here in Panama there is too much impunity on the part of those who investigate the crimes.”

Francia Archibold, the attorney who is representing the three Ngäbe leaders, said there is no doubt in her mind that they should be acquitted completely. For one thing, she said, the three leaders were among more than a hundred people, and it was unfair for them to be singled out. “Practically the entire community was there, and they were sincerely fighting for their rights,” she said. “I as an attorney can indisputably say that there is a certain level of persecution here. The reason is to harass the leaders with the sole purpose of silencing them, because they definitely have the power to convoke the people.”

‘They offered us a misery’

Meanwhile, in the community of Kiad, Miranda and other Ngäbe residents are living with the consequences of the illegal flooding of Barro Blanco Dam. The waters of their sacred Tabasará River, which they once fished and bathed in, have grown into a stagnant lake, killing the fish, swallowing the food forest that was their sustenance and flooding the petroglyphs that connected them to their ancestors. 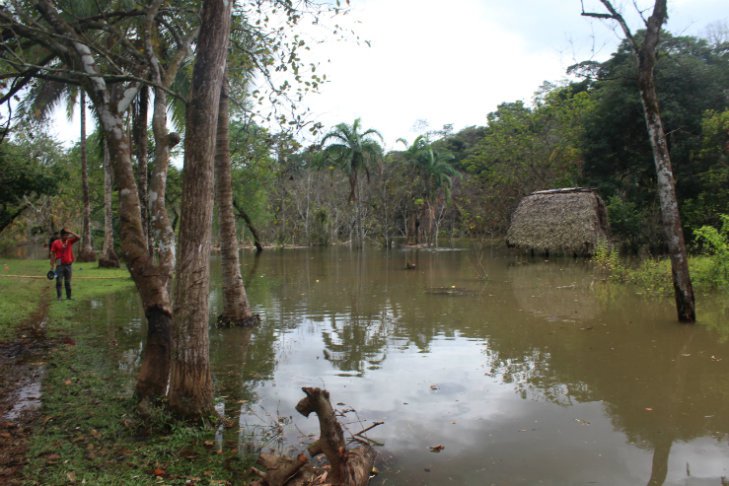 Some residents’ homes have been destroyed, leaving them homeless. Contacted by telephone, Miranda said the waters have risen to just within a few meters of his home and the cultural center and school for the Ngäbe language at the heart of their community.

His sister, Ngäbe congressional delegate Weni Bagama, shared an interview with Intercontinental Cry in a June visit to Panama City and described the conditions in the community.

“We used to live very peacefully, we slept our children happily all night, and after they flooded us, we have no peace,” she said. “Now from 6 PM onward, huge quantities of mosquitoes descend on us. We do not have repellents or mosquito nets, because it is an expense that we can’t possibly cover, and anyway it’s something we never needed before.”

Fever and diarrhea that have increased in the community, and children are being covered by mosquito bites, which are leading to infections, Bagama said. In addition, there is not enough food to go around since the community’s cropland was flooded. Before, they had a wide range of foods from a productive, multi-generation forest along the river; now they are living on the little bit that people bring from neighboring communities, the little that they can buy, and whatever they can grow in other areas higher up. But production has been very limited.

“We do not want to be a burden to anybody; we want them to lower the reservoir, because food we had, territory to produce we had,” she said. “We caught shrimp, fish, in that river and now we cannot do any of that.” 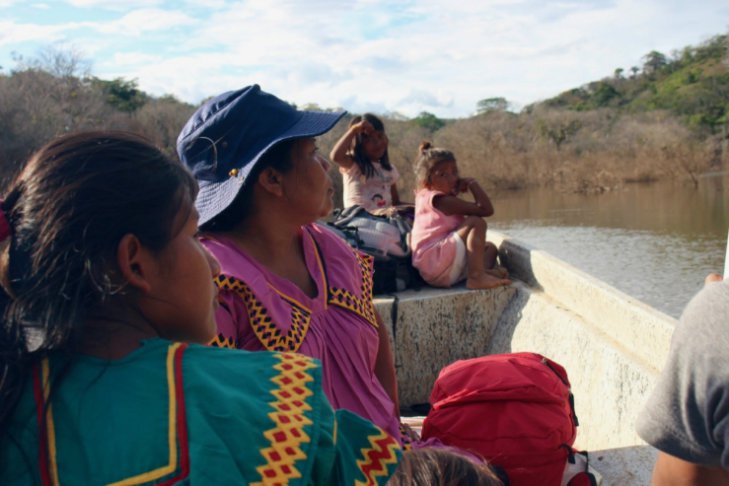 Both Bagama and Miranda told Intercontinental Cry that the government sent representatives to the community in March and offered them compensation for the land. Their position and that of the movement they represent against the dam, the Movimiento 10 de Abril, is that they are not willing to accept compensation for their lands.

“They offered us una miseria [a misery, or a pittance], giving us food for a day and taking away our lands that have offered us economic, food, social and cultural security for over 500 years,” said Miranda. “We cannot share that policy with the government in any way.”

Meanwhile, the lawsuit has taken its toll in terms of peace of mind for Miranda and his neighbors. “We feel a great social and legal insecurity; I feel as if there is no guarantee to my right and the right of the people, I feel deprived of my free expression,” said Miranda. “We have lost part of our land, and our crops.”

“This is the fourth time that the company has invented a pretext to persecute me, and it’s clearly to intimidate us from the struggle we are carrying out.”

Another of the leaders facing charges, Ngäbe Regional Congress president Toribio García, said the company building the dam, GENISA, had sued him five times and has tried to bribe him, but he has no intention of giving in. “What they do not know is that putting us in prison will just further activate the movement for the future generations that we are fighting for.”

Like Miranda and Bagama, García said he will not be intimidated.

Photos from top to bottom:

Ngäbe religious leader and Barro Blanco opponent Clementina Pérez, one of the three facing trial, shares an article about her arrest during the May-June 2015 protest. (Credit: Tracy L. Barnett)

Journalist Ligia Arreaga was forced to flee the country after death threats related her defense of the country’s most important wetlands, Matusagaratí. (Courtesy of Ligia Arreaga)