Agricultural biotech corporate giant Monsanto pretty much has had its way in Puerto Rico since it first set up seed breeding operations in the island in 1983. But the last few months have seen a hailstorm of bad publicity and protests against the corporation’s local activities.

“Monsanto does not produce, sell [or] offer…basic or certified seed with the purpose of planting in Puerto Rico,” argued company representative Eric Torres-Collazo in a letter to the Senate agriculture committee explaining the decision not to testify. Technically true, since all the seed this and other biotech companies produce in Puerto Rico is for export. But committee chair Ramón Ruiz-Nieves has not accepted Monsanto’s argument, pointing out that the company receives substantial subsidies from the local agriculture department and it is registered with the PR government as a bona fide farmer. Ruiz-Nieves informed the press that he intends to summon Monsanto again.

This particular story has received international coverage following a Corpwatch piece I wrote, which is actually a general story on Monsanto’s woes in the island, not just the seed hearing blow-off. Both Russia’s RT and TruthOut followed up on it, stating that the Senate hearing was about legislation to regulate and rein in the planting of genetically modified (GM) seeds in the island. TruthOut even portrayed the Senate as a formidable adversary, with the headline “Puerto Rico Senate Fights Back Against Monsanto.”

To set the record straight, PS 624 has nothing to say about GM seed. The Puerto Rico Senate has never attempted to regulate or constrain the local activities of biotech corporations in any way, shape or form, much less ever stood up to the likes of Monsanto. Furthermore, the text of PS 624 reads like something that could have been written by a Monsanto attorney.

Not only that, but the biotech seed industry faces a potentially more important and contentious battle in the PR Senate health committee, as we’ll see later.

The bill’s exposition of motives states that Puerto Rico has a real quality control problem with locally produced seeds and proposes to remedy this with legislation to regulate their production and sale. The bill does not address two main concerns of organic farmers and progressive organizations: contamination of seed stocks with GM varieties, and the patenting of traditional and heirloom varieties of seed by transnational corporations.

Article 10 of PS 624 reveals the whole agenda of this piece of legislation: “No person may produce or offer for sale in Puerto Rico, with the purpose of selling or reselling, any type of certified seed or basic seed with the purpose of planting, unless said person possesses a license expedited to these effects by the Puerto Rico Agriculture Department.”

Even a small family farmer will need government authorization to sell a bag of his own homegrown seed, whether at a farmers’ market or to a neighbor. The bill says nothing about barter exchanges, but such an omission should not be reassuring. If this bill passes, there is little doubt that seed exchanges, an increasingly common practice in the small but growing local organic movement, will come under government scrutiny. 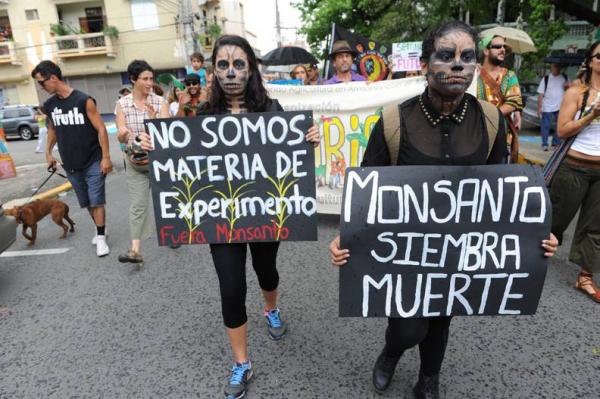 Anyone who thinks that fears of a “seed police” are far-fetched conspiracy theory should read up on the case of Canadian farmer Percy Schmeiser:

In 1998 Percy Schmeiser and his wife received a letter from the US agribusiness giant Monsanto claiming that they had used Monsanto seeds without a license in planting their 1997 crop. However, the Schmeisers had never bought Monsanto seed nor intended to have it on their land. It turned out that some Monsanto ‘Round-up Ready’ genetically modified canola (rape) seeds had blown over from the Schmeisers’ neighbour or from passing trucks. Thus, genes that Monsanto claimed to “own” under Canadian patent law had ended up in the Schmeisers’ seeds. Monsanto threatened to sue the Schmeisers for ‘infringement of patent’, seeking damages totalling $400,000 (CAD), including about $250,000 in legal fees, $105,000 in estimated profits from the Schmeisers’ 1998 crop, $13,500 ($15 an acre) for technology usage fees and $25,000 in punitive damages. At the same time, Monsanto offered to withdraw the legal challenge if the Schmeisers signed a contract to buy their seeds from Monsanto in the future and to pay the technology use fee.

The Schmeiser case is in no way unique or an anomaly, but rather part of a wave of abuse against farmers, most of whom were minding their own business when Monsanto came over to threaten them.

“These lawsuits and settlements are nothing less than corporate extortion of American farmers,” said Andrew Kimbrell, executive director of Center for Food Safety. “Monsanto is polluting American farms with its genetically engineered crops, not properly informing farmers about these altered seeds, and then profiting from its own irresponsibility and negligence by suing innocent farmers.”

PS 624 fits into a larger global pattern of seed laws that protect the profits and markets of corporate seed giants and outlaw seed varieties outside corporate control.

According to the Europe-based organization GRAIN:

Seed laws are all about repression. They’re about what farmers can’t do. They dictate what kind of seeds can’t be sold, can’t be exchanged and in some cases can’t even be used. All in the name of regulating trade and protecting food growers! In this sense, seeds laws go hand in hand with intellectual property rights (IPR) regimes like plant variety protection and patents. The two kinds of laws—marketing regulations and property rights—reinforce each other. In fact, depending on the situation, seed laws can be a lot worse. They ban farmers’ seeds from the market thereby creating a kind of agricultural apartheid in countries where they are strongly enforced. IPR-protected seeds already can’t be marketed except by those who own them. Seed laws tend to ensure that traditional varieties—seeds not produced by the seed industry and not protected by IPR—can’t freely circulate either. All you can officially buy are a few government-sanctioned ideotypes.

New seed laws are being introduced throughout Latin America to replace older seed legislation. Even though governments are being pushed into less government involvement, in this case the government is laying down some strict laws. Though the seed laws vary considerably between each country, the main purpose of these seed laws is to provide better protection of private seed varieties developed by companies and sideline farmers’ own seeds completely. In many cases, farmers’ own seeds are, or will become, illegal. [GRAIN]

The informal seed sector has witnessed a change to a more restrictive policy environment of seeds for small farmers and a more liberal one for seed companies. The tightening of controls on farmers’ seeds goes along with an increasing control over seeds; first, by the national agricultural research systems and second, by private players, namely, large companies, research entrepreneurs and corporate breeders. [GRAIN]

Now, why would Monsanto hide and refuse to publicly testify on legislation that seems so favorable to its interests? The answer may have to do with the company’s public relations crisis in the island. The last few months have seen the corporation faced with an increasingly numerous and vocal opposition from civil society, as well as rather unfriendly press coverage. On May 25, hundreds of protesters in Puerto Rico marched against the company and its GM crops as part of a worldwide day of protest against Monsanto. 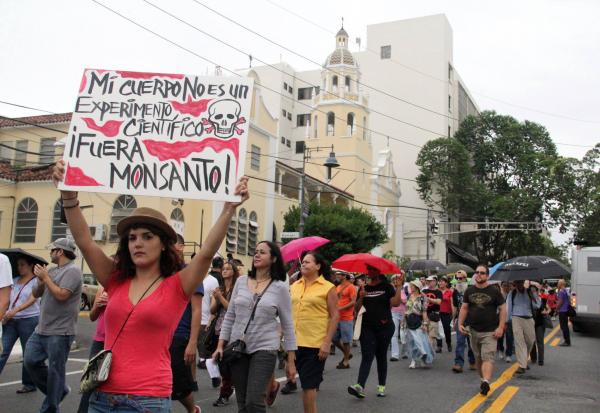 A much more important legislative battle concerning the biotech industry’s local operations is unfolding in the Senate’s health committee. It is currently considering bill, PS 524, presented on April 22 by Maria de Lourdes Santiago, of the Independence Party, and Lawrence Seilhamer of the New Progressive Party, which would require the labeling of all foods with GM content sold in Puerto Rico. Organización Boricuá de Agricultura Eco-Orgánica, a local member of La Via Campesina and a leading advocate of organic farming and food sovereignty, is calling on all concerned citizens to phone the Senate and demand public hearings for this bill.

Will Monsanto testify at such hearings and openly oppose labeling? Or will it duck and cover, as it did on the seed bill? If they testify, the company will lose big by getting a lot of unwelcome public exposure. If they don’t, their no-show will be news and everyone will be left wondering what is “Mondiablo” afraid of.

A reliable source informed me last month that the company is shopping around for a public relations firm and may have picked one already. My first guess would be Burson-Marsteller, PR global giant that I exposed back in the mid-1990’s. Back then, B-M was hired by pharma giant Eli Lily and Monsanto to neutralize the activist opposition to their bovine growth hormone (rBGH). Their operations included planting spies in anti-rBGH activist meetings.

Monsanto’s PR people, maybe with the help of other biotech corpos with operations in the island, are probably right now lobbying the Puerto Rico government behind the scenes to get the Senate agricultural committee to drop PS 524 and scrap any plans for public hearings.

2013 so far has been a most interesting year for anti-GM activists in Puerto Rico. The remainder of the year promises to be even more so.

Ruiz-Marrero is an author, investigative journalist and environmental educator. He is a research associate of the Institute for Social Ecology and directs the Puerto Rico Project on Biosafety. His Twitter feed is @carmeloruiz

Photos of anti-Monsanto rally in San Juan on May 25, attended by hundreds of protesters—part of a worldwide anti-Monsanto protest day in which some 2 million participated. Credit: Indymedia Puerto Rico