The Municipal Resistance in El Salvador

Communities and organizations in northern El Salvador continue to organize referendums in an effort to keep their territories free of mining.

Established by the country’s Municipal Code as a mechanism for community participation, the consulta popular is an official municipal-level referendum on an issue of local concern that can be invoked by petition if residents are able to gather signatures from 40 percent of registered voters. On the books for years, the mechanism had never been used, but it now plays an important strategic role in the country’s movement against metallic mining.

The most recent referendum took place on February 26, when more than half of all registered voters in the municipality of Cinquera flocked to polling stations in four communities. The final tally was along the lines of the four previous referendums on the issue: 98.1 percent of participating registered voters in Cinquera cast a ballot opposing metallic mining exploration and exploitation. The local government will now draw up an official municipal ordinance prohibiting mining in its jurisdiction.

The afternoon prior to the referendum, the village was abuzz with activity in anticipation of the event as the sun began to sink behind the hills surrounding Cinquera. A couple of blocks from the central plaza, Bernardo Belloso pulled up a plastic chair in a local community association’s open-air meeting hall to discuss the context behind the referendums.

Belloso is the president of CRIPDES, a Salvadoran organization with roots in Catholic liberation theology. The group was founded in the midst of the 1980-1992 armed conflict in El Salvador that left 75,000 dead and another 8,000 people disappeared. Approximately one quarter of the country’s population was displaced.

These days, Belloso has been accompanying and supporting resettled communities in northern El Salvador in their struggles to keep their territories free of mining. On the eve of the referendum in Cinquera, the first to take place in the department of Cabañas, he spoke about the recent history of anti-mining struggle in the neighboring department of Chalatenango, as well as national-level organizing for a legislated ban on mining in El Salvador.

Could you explain, in a nutshell, the history of CRIPDES?

CRIPDES arose in 1984 as the Christian Committee for the Displaced of El Salvador. [It has since changed its name to the Association for the Development of El Salvador, but the acronym remains the same.] It was founded with the objective of denouncing the repression, killings, forced disappearances and massacres that the army was carrying out during that period. Over time, CRIPDES was one of the trail-blazing organizations at the national and international levels in terms of reporting and condemning human rights violations in the country.

Later on, in the lead-up to the Peace Accords, CRIPDES played a very important role in the return of the populations that were refugees and displaced in other countries here in Central America. CRIPDES accompanied their return to El Salvador, creating human settlements in different parts of the country. An organizing mechanism was also established in all of those communities, transforming them into community structures for the self-governance and development of their own communities.

From there, CRIPDES has been doing accompaniment and support work, strengthening community organization through the ADESCOs [Communal Development Associations], and—of course—working with women, youth and other sectors of the population.

Communities in Chalatenango, where the first four referendums took place, have engaged in different activities and actions with regard to mining over the years. What’s the backstory to the referendums?

The process of the referendums has a fairly complicated history because in El Salvador, until 2001, the population basically didn’t know what a metallic mining exploitation process entailed. However, in 2001 and 2002, mining companies began a process of exploration along the whole northern strip of El Salvador—including the department of Chalatenango, particularly its northeastern area, where we have an organizing process developed by CCR [the Association of Communities for the Development of Chalatenango].

When people there began to see workers carrying out exploration activities, especially in lands that belonged and belong to community residents, they began to investigate to see what those workers were up to. What really troubled the communities and people was that the workers were putting markers in the people’s lands, and in some cases they also caused damage to crops.

A process of exchange began with other communities, especially in the Siria Valley in Honduras, and people travelled there to see the results of an extractivist model. They saw the poverty, destruction and social conflicts that was the result of the the mining company’s presence. So, in the end, people said, “We don’t want mining here in our country.” They dedicated themselves to kicking out the mining companies, especially from the northeastern area of Chalatenango. 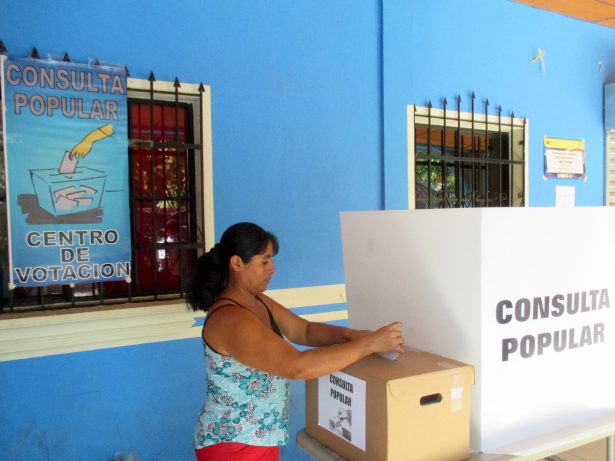 The movement against mining has also been pursuing legal mechanisms, from a law at the national level to the referendums at the local level. Could you explain their objectives?

The population began calling for the creation of legal instruments at the national level to ban metallic mining exploitation. This was of course related to a series of campaigns carried out by the conglomeration of organizations affiliated with the National Roundtable against Metallic Mining, of which CRIPDES is a member, along with organizations like CCR, ADES [the Santa Marta Association for Economic and Social Development] and others. We were demanding the legislative assembly pass a law banning metallic mining. We’ve been demanding they pass a law for more than 10 years, but legislators aren’t responding to this issue that we’re facing in the communities.

In 2012 or 2013, CRIPDES started discussing the creation of a mechanism to be able to inform and empower communities. It started with the idea of empowering communities to defend their territories, and of creating local proposals or documents or legal instruments oriented against the exploitation of the mineral resources that might be found in these municipalities.

That’s where we were at, and we saw fit to review some legal instruments like the Municipal Code. There are articles in there that instruct the population on mechanisms for how people can participate, making certain demands of the municipal council. It’s established in Articles 115-117. People can participate via community assemblies, town hall meetings, campaigns, and, of course, the referendums are also established as a mechanism for the participation of the population. So when we initiate the referendum process, we refer specifically to those three articles.

How has the referendum process unfolded in practice?

The first referendum was in San José las Flores, used as a pilot to see if people would respond, given that they themselves had articulated the demand. When it came time to vote on the day of the referendum, 72 percent of registered voters showed up. And when it came time to tally the votes of that first experience, we saw that 99 percent of the people who voted said no. Only two people said yes to mining. One ballot was void and another was blank.

We used this mechanism so people could see that we carried out an entirely transparent process. Of course, that motivated other municipalities to work and learn about the experiences, particularly of the people. We started to generate that process of awareness in the other municipalities of San Isidro Labrador, Nueva Trinidad and Arcatao—all in the department of Chalatenango. Consolidating the total of all the people who have voted [in the first four referendums, before Cinquera], we calculate that nearly 70 percent of the [registered voters] in that overall territory came out to vote, and of that 70 percent, 99 percent said no to mining.

We want to bring this experience to other municipalities that are being threatened by metallic mining companies. What we’re trying to do is to allow people to decide what it is that they want for their community and for their municipality.

Sandra Cuffe is a freelance journalist based in Central America, where she covers environmental, indigenous, and human rights issues.

This story and photos first ran March 4 on Waging Nonviolence.