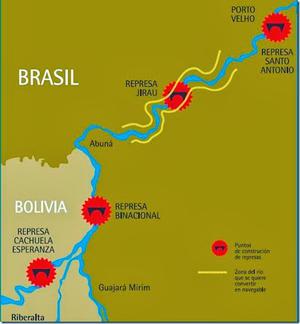 In recent months, Bolivia’s Amazonian region has experienced the most disastrous flooding of the past 100 years. In the Beni department, seven of eight provinces and 16 of 19 municipalities are under water, with 75,000 people (more than one-quarter of the population) affected. Economic losses from the death of 250,000 livestock heads and destruction of seasonal crop lands, estimated at $180 million, are mounting daily.

While seasonal flooding is common in Beni, experts agree that climate change has added a threatening new dimension to the cyclical pattern, bringing record rainfall to most of Bolivia this year. Deforestation, exploitation of cultivable land, and loss of infrastructure through the breakup of traditional communities are other factors contributing to soil erosion and increased vulnerability to flooding.

In the past weeks, attention has focused on the role played by two recently-inaugurated Brazilian mega-dams—the Jirau and the San Antonio—in Bolivia’s floods. Located on the Madeira River, the largest tributary of the Amazon which receives its waters from rivers in Bolivia and Peru, the dams are just 50 and 110 miles, respectively, from Brazil’s Bolivian border.

The dams are part of an even larger hydroelectric power complex planned for the area, which will include a third, binational dam (Ribeirao) directly on the border, and a fourth station inside Bolivia (Cachuela Esperanza). The dams are designed to generate electricity for Brazil’s industrial heartland, one thousand miles to the south.

Completion of the project will also open up a 2,600-mile industrial waterway for the transportation of (mostly Brazilian) export products—including soybeans, minerals, and timber—to Atlantic and Pacific ports. The complex is an anchor project of IIRSA, a Brazil-led initiative to integrate the continent’s infrastructure through strategic investments in energy, communications, and transportation, including the development of interoceanic land and water corridors.

In mid-February, Bolivian President Evo Morales, after surveying flooded areas of Beni and neighboring Pando, announced that “something strange” was happening in the river basin upstream from the Jirau and San Antonio dams. Although the heavy rains had subsided, the water levels were not dropping as they should have. Morales ordered an immediate investigation.

Preliminary results showed evidence of a “reflux effect,” in which the floodwaters were effectively being pushed back by the dams into Bolivia, instead of flowing out towards the Atlantic Ocean. A bilateral technical commission has been established to further investigate the problem (while Brazil continues to publicly deny any connection between its dams and Bolivia’s flooding).

Bolivia should demand an international audit, says LIDEMA, as well as compensation for damages from the Brazilian dam operators (consortia controlled by France’s Suez, in the case of Jirau, and by the Odebrecht construction conglomerate, several banks, and Brazil’s Electrobras, in the case of San Antonio). In addition, the Morales government should rethink its energy policies and permanently abandon the proposed Cachuela Esperanza dam, as well as its support for the binational Ribeirao dam (both projects are temporarily on hold).

For environmental and other civil society groups, the recent revelations have come as no surprise. Back in 2007, a coalition of 38 environmental, indigenous, small farmer, and labor organizations in Bolivia and Brazil jointly petitioned both governments to oppose the then-pending licenses for Jirau and San Antonio. Their concerns included potential threats to traditional economies—including fishing, Brazil nut harvesting, and seasonal floodplain agriculture—to the region’s biodiversity, and to public health (from insect-borne diseases supported by stagnant water pools that the dams would create).

In addition, LIDEMA and other experts warned that the hydrological and environmental impact studies provided by the dam companies to justify the projects were seriously flawed. By using past historical rainfall data to model future water volume, LIDEMA argued, the studies failed to anticipate climate change, deforestation, and extreme weather events that were becoming increasingly prevalent in the region.

They also failed to address the impact that barge traffic, port construction, and other features of the proposed industrial waterway might have on ecosystems and flood patterns. Most important, they ignored the potential impacts of the dams beyond Brazil’s borders, on Peru and Bolivia.

Responding to civil society pressure, the Morales government expressed its concerns with the “probable ecological and environmental impacts” of the proposed dams in a formal letter to the Brazilian government in 2006. Still, when Brazil’s environmental permitting agency finally approved the projects in 2009—reversing its initial rejection, contrary to the opinion of its own technical experts—the Bolivian government failed to mount a serious challenge. Political pressure from then-President Luiz Inácio Lula da Silva—who envisioned the hydroelectric power projects as key to Brazil’s economic revitalization—was one possible factor. Potential commercial opportunities created by the proposed industrial waterway for Bolivia also likely appealed to the Morales government’s emerging developmentalist proclivities, along with the benefits of exporting energy generated by the Cachuela Esperanza power plant to Brazil.

Subsequent technical and ecological studies—by sociologist Monica Vargas Collazos, hydraulic engineer Jorge Molina, and CIPCA (an NGO providing assistance to farming communities) have reinforced LIDEMA’s initial concerns. Molina has also criticized the absence of an independent monitoring system in the design of the dams, that would allow Bolivia to measure their ongoing impact.

LIDEMA and other civil society organizations are now pressing the Morales government to bring a similar legal action, without waiting for the results of the proposed bilateral technical study. Among other irregularities—which implicate the Brazilian government as well as the dam companies—critics note that the Jirau consortium was permitted to move its plant six miles downstream to reduce costs, with no study of the resulting environmental impact. Additionally, after starting operations, each dam consortium was allowed to increase its capacity by adding turbines and raising its reservoir level, again without the benefit of an environmental impact assessment.

Meanwhile, the opposition governor of Beni—along with Beni municipal and civic leaders and indigenous organizations from the TIPNIS—has accused Morales of political partisanship in distributing aid to the stricken communities. These groups, as well as Bolivia’s human rights Ombudsman and the Catholic Church, want Morales to declare Beni (and several other departments) as natural disaster zones, to trigger an infusion of international aid directly to the affected regions.

The Morales government says this would remove any incentive for cooperation by the departments and municipalities, which allegedly have resources that remain unspent. Morales has declared a national emergency, and is channeling federal as well as international aid through the armed forces.

At least for now, the focus on Brazil’s dams has helped to deflect this internal political controversy. Still, the emerging bilateral conflict, and how it plays out for Morales, is bound to have domestic repercussions of its own in this presidential election year.

This story first appeared March 31 on the website of the Noth American Congress on Latin America (NACLA).

BOLIVIA: THE POLITICS OF EXTRACTIVISM
by Devin Beaulieu and Nancy Postero, Against the Current
World War 4 Report, November 2013