This is pretty funny. Israel’s progressive +972 mag reports March 7 that a delegation from the group Breaking the Silence, an anti-occupation organization made up of Israeli army veterans, recently arrived in Hebron to be greeted with two prominently placed banners raised by local settlers, reading: “Palestine never existed! (And never will)”. Both the banners, which were very professionally produced (no hand-painted job), were hung on sections of Shuada Street that Palestinians are barred from entering under restrictions imposed in the wake of Baruch Goldstein’s 1994 massacre at Hebron’s al-Ibrahimi Mosque.

Hopefully, we don’t have to elaborate overmuch on why this is ahistorical idiocy. Even the early Zionists considered themsleves “Palestinians,” because they lived in what was then Ottoman or British Mandate Palestine, as evidenced by this 1947 poster. 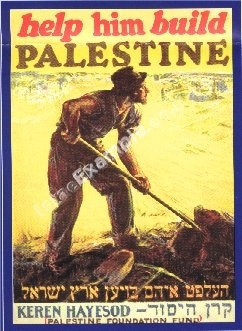 These Hebron hoodlums evidently don’t even know their own history. Then there’s this Mandate-era postage stamp: 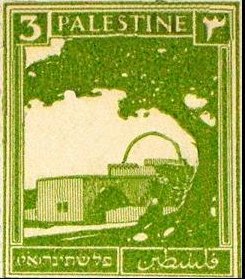 Ironically, the pro-Israel Elder of Ziyon blog gripes that Palestinian textbooks have airbrushed the Hebrew text out of the image in their reproduction of it. If true, all this means is that Zionists have no monopoly on revisionism.

Another case in point is a maddeningly idiotic piece on Alternet by one William Boardman, entitled “US Provokes Russia, Acts Surprised to Get Nasty Reaction”—as if the entire Ukrainian protest movement that brought down Viktor Yanukovych was a mere US-created charade. It includes this gem of historical denialism:

Ukraine is NOT a real place. Ukraine has never been a real place, not in the sense that Madascar or Cuba are both undeniably real places with real edges. Ukraine has no real edges, just lines on a map imposed by some treaty or army over the past several thousand years. To speak, as the more pompous do, of Ukraine’s “territorial integrity” is to speak of an imaginary construct, useful for blurring people’s minds for political purposes.

Note that Madascar and Cuba are both islands and therefore have very obvious “real edges.” If we are to really apply Boardman’s criteria with any kind of single standard, then the United States of America is not a “real place” either. Its history is not nearly as long as Ukraine’s, going back mere hundreds of years, and its edges are also defined by “some treaty or army”—Treaty of Paris, Guadalupe Hidalgo, Treaty of Oregon, etc. (We had to make this same point a couple of years back when neocons called for the balkanization of Libya on the grounds that it isn’t a “real” country—despite the fact that by the very standards used to judge it, it is “realer” than the USA.) Yet when it comes to Russian claims, Boardman suddenly remembers his history:

Russia’s history of maintaining a military presence in Crimea is older than United States history. The Russian Black Sea Fleet has been based in Sevastopol in Crimea continuously since 1783. For the Russians, this is a crucial warm water port, currently leased from Ukraine till 2042.

This is another sleight-of-hand. Crimea (Boardman fails to note) only became part of Ukraine in 1954. It was part of Russia before that. Ukraine’s heartland has its own distinct history and (critically) language—which was banned from the schools when Russian imperial rule began there in the late 18th century. Ukraine, like Palestine, has been held by foreign and imperial powers for most of its history (not only Russia but Poland, Lithuania, Austria-Hungary), but has also reasserted its independence at every possible juncture—most recently, during the Russian Revolution (when anarchists were briefly in power), and then after the Soviet collapse. In short: Just as one does not have to like Islamic Jihad or Hamas to recognize the existence of the Palestinian nation, one doesn’t have to like Svoboda to recognize the same thing about Ukraine. It is painful indeed to see “progressive” websites like Alternet echoing the perverse denialism of the most reactionary Zionists.