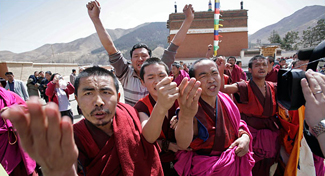 Mass arrests of monks and their supporters continue in Tibet and the neighboring Tibetan ethnic regions of the People’s Republic of China. On May 7, thousands of People’s Armed Police and Public Security Bureau personnel surrounded Labrang Monastery, Xiahe County, Gansu province, detaining around 140 monks. The next day, monks from the monastery held a protest to demand the release of those arrested. All but seven of those arrested were released after the protest.